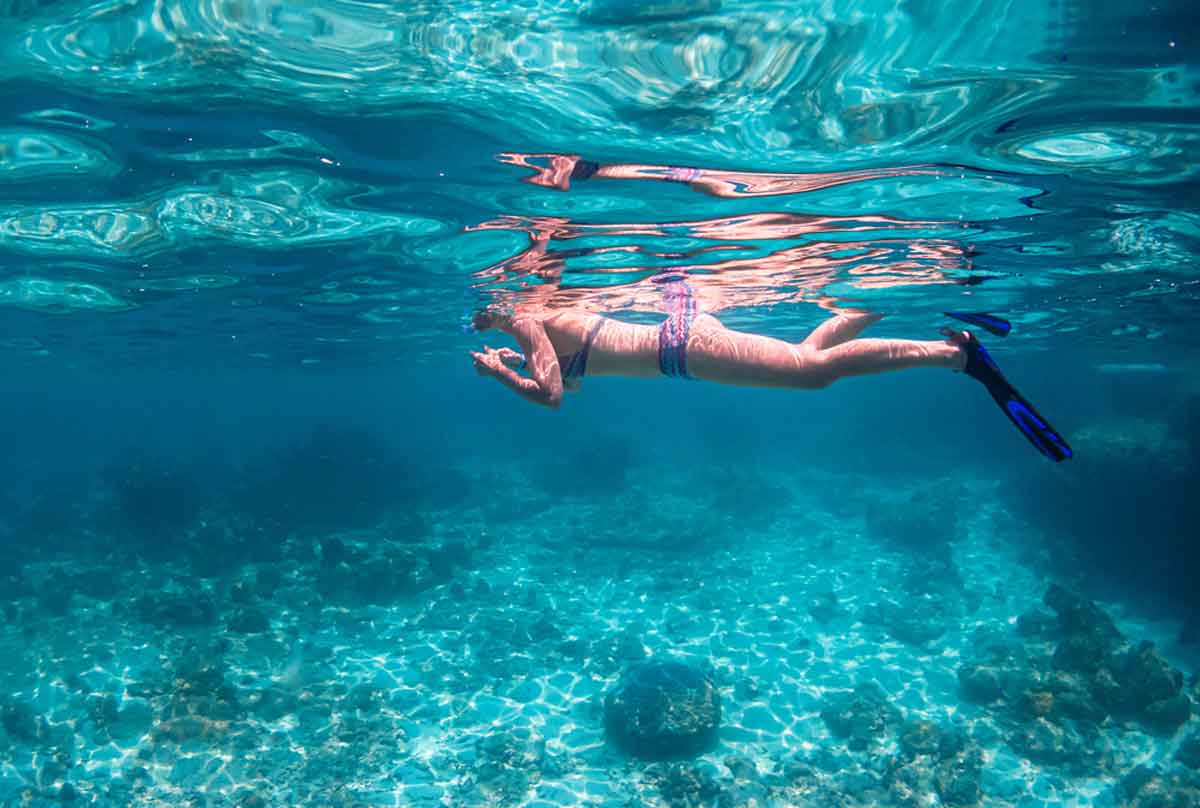 Most aspects of life have a golden rule. Whether it’s religion, politics, or a sport. There tends to be an instruction or etiquette that’s more important than the others.

One rule to rule them all if you will.

Snorkeling is no different, and while others may have a different rule, there does tend to be a general awareness of this principle in the snorkeling industry. It will be drilled into you on snorkeling tours no matter where you go.

What is that Golden Rule? Don’t touch anything

Yep, the simple act of keeping your hands to yourself, and observing rather than interfering. The reasons for it may not be clear if you are new to the sport, so it’s worth learning why that rule exists.

Also, let’s be clear, this rule in some places is the law. You simply aren’t allowed, to protect the reef ecosystem.

While sounding simple, ie don’t reach and grab stuff, there are a few nuances to how the rule is applied in the practice of snorkeling.

Snorkeling can often overcome people as they get immersed in a new world. Taken away from their normal world they stimulate on the environment and colors that surround them.

The temptation seems almost irresistible, a fish swims by and you reach out to touch or see if it’s curious. The shells, the rocks, and seabed. It all seems so tangible that you want to pick things up and take a closer look.

It seems ingrained in us, which is why the rule is drummed into new snorkelers.

Once you’ve been in tropical waters having experienced the wonder as small fish shoals dart around, you can relate to the experience of putting your hands out to see what happens. Even coral seems so inviting to reach out as you wonder about the texture.

When dealing with nature there is often a ‘look but don’t touch’ approach. It’s an idiom to help keep the situation safe, and so it remains with snorkeling.

It helps keep the snorkeling destinations of the world pristine and observable for generations to come.

Why You Should Only Look But Not Touch

It’s a beautiful world when you’re snorkeling, it really is. The vibrant colors coupled with the underwater terrain.

So why shouldn’t you touch them? Sometimes it’s the law of the country you are in, but even if it isn’t what is the reason it’s a snorkeling rule.

Firstly it’s simply a matter of numbers. Snorkeling is tried by millions of people every day in some very fragile ecosystems that are damaged quite easily. Hanauma Bay has 3000 visitors a day, and the Great Barrier Reef sees 5 million tourists a year.

If everyone has a simple rule not to disturb items of coral or take souvenirs home with them to make mantelpiece trinkets then we can have sustainability.

Setting aside that you are disturbing an ecosystem that is life to everything from microorganisms and the fish with which they exist in balance, you are actually interfering in the habitat of marine life.

Once you finish snorkeling if everyone snaps off a bit of coral to take home, pretty soon some of the most beautiful places on earth would be devoid of everything. Those corals sustain the food for entire fish shoals, so it’s easy to see why we should be viewers to this world, not influencers.

Secondly, you can actually cause a great deal of stress to the underwater world. You need to see actions as not single and isolated, but as an influence on the world, you are entering.

Touching coral can be extremely harmful, not just for the coral but for the system in sustains. Corals are not just rocks, but they are alive.

Coral is a stunning environment to snorkel in, and its beauty attracts many an aquatic enthusiast. Corals are a complex of finely balanced living animals.

Coral polyps can capture and consume fish to survive. The environment is protected by a mucous membrane, and when you touch it you can remove it. Fish have the same mechanism to protect them from disease.

Touching coral removes this protective layer and leaves it impervious to disease, and can kill it.

Corals exist in symbiosis with algae called zooxanthellae. Removing the protective layer will cause imbalance to this symbiosis, as the coral delineates from the zooxanthellae, which causes ‘stress’ to the coral.

As the coral becomes stressed, the process is known as ‘coral bleaching’ because its color disappears and the coral goes white.

So when you touch coral, the damage isn’t immediately obvious, but if you see some bleached coral, that’s what’s happened. Decades of people touching it, or damaging it by walking on it, or even boat damage, can take its toll.

So as a snorkeler you should keep alert to what you are doing and not stray over corals and stand up on them to get that Instagram shot. Taking selfies, and generally mucking around can kill the colony.

So slow and controlled movements while observing is the way to go. As is informing those who haven’t heard. Often can damage coral by not being aware of what they’re doing, so it becomes the responsibility of snorkelers to help educate those who may be about to do unintentional harm.

While the goal of snorkeling is to immerse yourself in a new world, part of the fun is to interact with the wildlife. Fish may dart up to you, and wonder what you are, or maybe seeking shelter under your frame.

As you shouldn’t touch fish either, you should get used to making slow and controlled movements around marine life. This is the natural way of the sea. Things move and glide. Darting, random movements are the signals of distress.

It signals to the aquatic world, a wounded and defenseless animal. This isn’t the vibe you want to be giving out.

Controlled and anticipatory movements by other animals mean that you are non-threatening, and as such, you will not only see more, but you don’t frighten and stress the life around you.

As well as minimizing quick movements, try to eliminate splashing and large disturbances in the water. Water animals rarely behave like that.

If animals approach you, you still shouldn’t touch but remain motionless and observe.

While fish move in every direction, animals like turtles still need to breathe air from the surface, so try not to block them from the surface by positioning yourself above them. You want them to act with curiosity towards you, not stress them that you are a threat.

In many snorkeling environments, they recommend limited interaction with the animals and prescribe just observation, but in others it’s illegal. If you keep in mind the ‘don’t touch’ rule, then you’re safe from either eventuality.

Many animals have nasty bite or sting as a defense mechanism, and some with neurotoxins won’t be that great for you. The spines are there for a reason.

In the same vane as touching coral and fish, the other thing that isn’t recommended is to feed the fish. As tempting as it is, you shouldn’t. There’s a reason snorkeling and scuba tours don’t sell fish food to the tourists or attract fish with it.

Feeding many animals isn’t recommended for a few reasons. While monkeys at a zoo could get overfed, so can fish. It’s not just you, but many people who may do it. The fish get overfed and don’t eat their natural food.

If this occurs an ecosystem goes into imbalance and can be harmful to all concerned. Wait for fish to come to you. Making slow and controlled movements help.

Often you are adding a new source of minerals to the water system which can also be disruptive.

Thousands of people all putting foodstuffs into the water attracts different animals and alters balanced feeding patterns. Entire systems can get disrupted.

Life can often exist in a fine balance, and this is particularly true for marine life. Humans trying to observe can often do a great deal of damage, even if it’s unintentional. Ignorance really can kill.

Snorkeling can be an amazingly rewarding experience, and to make it even more memorable you should remember the critical rule of not touching anything.

Not touching anything translates into the very practical aspect of

Observing these rules helps keep the ecosystems of the snorkeling world sustainable.

Experiencing the wonderful coral colors is even more rewarding if you’ve observed the rule, and passed on the experience to the next group of snorkelers wishing to observe the same.