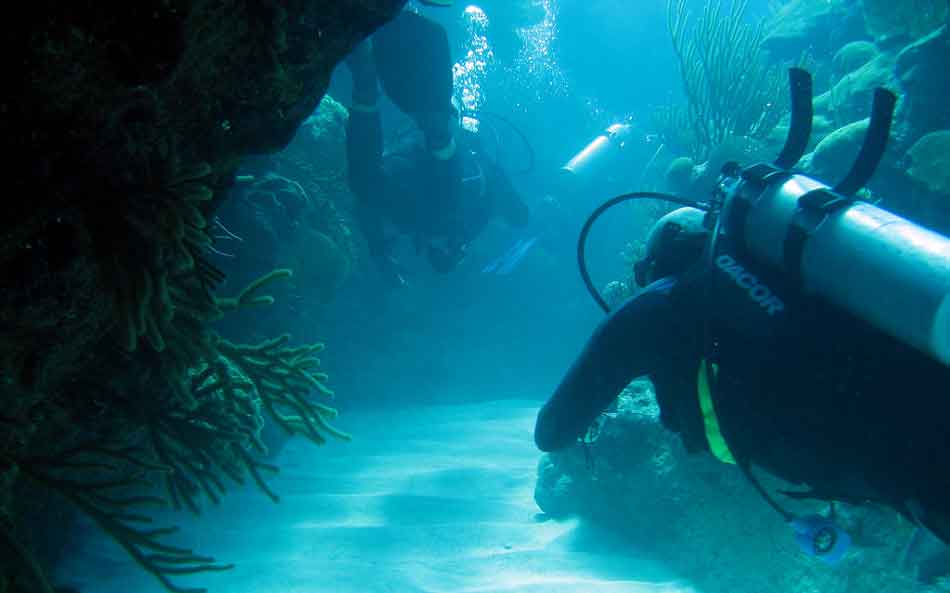 As new divers begin to learn more about the sport of scuba diving, they are often excited to get out and experience scuba in many different places.

In fact, new divers are often surprised at the wide number of environments that you can dive in, each with their own unique experiences.

What kind of environments can you scuba dive in?

The number of options is not quite endless, but fairly close. While coral reefs will always be the most popular, scuba diving can take you into the open ocean, caves, inland lakes, and even polar environments. Some environments require special equipment and skills, but many can be accessed with a basic open water certification.

Let’s take a look at the various environments that you can scuba dive in. We’ll talk about what you can expect from each and any special techniques or certifications you need.

It makes sense to start with the most popular. There are a number of reasons why coral reefs are popular.

First, they are easy to access as they are often close to land and typically shallow, meaning any certified diver can dive there.

Additionally, coral reefs have a huge variety of wildlife. You can go to the same site countless times and find new things to discover.

The highlight here is the wildlife. You’ll find plenty of brightly colored fish, anemones, crustaceans, and other animals.

Most visits to a reef even have sightings of large groupers, barracuda, reef sharks, or larger pelagic fish that swim through the area.

You’ll also see the beauty and diversity of the coral itself which come in many different formations and colors.

While coral may look like rocks, it is actually a collection of living organisms. Coral is the longest-living species on the planet with an age of up to 4,000 years.

Diving in coral environments is exciting and typically easy; however, be sure not to accidentally touch the coral as the oil from your hands can kill it while some types like fire coral can give you a sting.

You’ll find coral reefs in many tropical areas with some of the most popular destinations, the Yucatan, Red Sea, and Southeast Asia.

Typically the second type of scuba environment most people try out is the open ocean.

As the name implies, the open ocean is an area of open water.

The primary thing that brings people to these environments is the pursuit of large pelagic animals.

In the open ocean, you’re more likely to see larger animals such as sharks with tiger sharks and hammerheads types people often want to find.

You can also find things like manta rays, whale sharks, and occasionally a whale.

The open ocean can be enjoyed by virtually any diver from basic open water certified to advanced divers and, along with coral reefs, is the site of many shipwrecks although advanced certification is typically required for reaching open ocean wrecks.

Popular places for open ocean diving include the Atlantic coast from North Carolina to Florida (particularly Jupiter, Florida) and Hawaii.

A thing to consider before diving in the open ocean is your comfort level. Sometimes, the wide open sea can make people feel anxious.

Kelp forests are one of the most intriguing and beautiful ocean environments.

In fact, I highly recommend that everyone dive in a kelp forest at least once in their lifetime to get the experience.

Kelp has been around for 23 million years.

While there are over 30 genera, the most breathtaking is the giant kelp that spans over 100 feet in length.

Like reefs, kelp provides security for marine life, meaning you will find many different creatures living within these forests.

Common animals found in kelp forests include garibaldi, many types of starfish, octopi, nudibranchs, and a variety of fish.

In many areas, you’ll also find seals and sea lions who use the kelp as protection from predators.

You can also find many smaller sharks such as leopard sharks.

The California coast is a very popular place for kelp forests. It is important to use caution in these areas as the kelp can become entangled on you. You’ll always want a buddy and a dive knife.

Also, these areas are typically cold so a thick wetsuit is usually required if not a dry suit.

However, many people dive in freshwater environments.

Some divers prefer these while others simply love to dive and this is the best point of access.

I live in the Midwest and while I love diving in the ocean, most of my dives are logged in lakes and quarries.

Lakes tend to have higher temperature fluctuations, becoming quite warm in the summer and very cold in the winter.

Quarries also fluctuate, but are more stable as the limestone that forms them provides a bit of temperature insulation.

While you will not see as vibrant of wildlife here, you will see lots of fish – although in more drab colors – and some impressive specimens such as types of sawfish.

Many quarries have been turned into scuba diving resorts with many large objects sunken to allow for exploration.

I’ve explored a 737 airplane, school buses, and many other things in quarries.

One thing to note about lakes and quarries is the presence of thermoclines, areas where a large temperature decrease is felt as you go downwards.

These are also in oceans, but typically further down than people dive. In lakes and quarries, you often find thermoclines at 10-20 feet.

When many people think of lakes and diving, they envision areas like the Great Lakes with their tons of shipwrecks.

However, these environments are more akin to the open ocean as they are quite large, very deep, and have currents.

This is a bit of an extreme environment and one you may need a specialized certification for depending upon whether you want to dive in a cave or a cavern.

These are underground environments.

What is the difference between caves and caverns?

Cavern diving explores overhead environments while staying within sight of sunlight, typically with penetration no more than 200 feet from the surface.

Cave diving may penetrate into total darkness, sometimes thousands of meters from the surface.

This type of diving can only be found in certain areas and includes spectacular things such as stalagmites (in caves that were originally formed aboveground) and haloclines (areas with rapid salinity changes that form a false floor).

Divers with open water certification can engage in cavern diving; however, it is recommended to have a handful of dives under your belt.

Buoyancy is important as these environments can have narrow areas and kicking up silt can significantly hurt navigation.

There are many places to try out caverns and caves. Florida is home to some of these environments while Bonne Terre Mine near St. Louis is an old mine that has been allowed to flood, with 24 different pathways for cave diving.

Meanwhile, perhaps the most famous site for both cave and cavern diving in the world are the cenotes of the Yucatan Peninsula near Playa del Carmen.

There are far too many environments to thoroughly discuss in one article; however, here are some other environments that do not need as much detail for discussion.

These are steep valleys that are cut into the seabed.

They often extend for a long way off of the continental shelf and are sometimes found near coral reefs.

At the walls of canyons, you get the best of both worlds with the opportunity to see shallow water wildlife and more pelagic creatures.

You probably have never thought about diving in a river, but there are people who do it. Typically, the reason is access.

If you live far inland, rivers are simply an option.

Rivers can have very limited visibility but can also be a fun way to find many random things such as lost objects.

Current is obviously a consideration here.

This also likely falls in the category of things you wouldn’t consider. However, many aquariums offer the ability to dive.

At some like the Georgia Aquarium, you can pay for a special experience. Others allow divers to volunteer to dive and help clean their tanks.

Sort of a special environment, there are actually several underwater museums in the world.

These are typically sculpture parks where divers can explore. Some of the ones you’ll find are the Cancun Underwater Museum of Art, Spain’s Museo Atlantico Lanzarote, Italy’s Baia Underwater Park, and Israel’s Caesarea Underwater Archeological Park.

This is a very unique environment in the sense that you can only do it at one specific place; however, it’s on my bucket list and a fun one to include.

Iceland’s Silfra fissure can be found in a lake where a crack between two tectonic plates has formed. Divers can dive between the two continents here.

A drysuit (which requires a special certification) is required.

Ultimately, there are a wide variety of environments to explore.

While many people focus on coral reefs for their variety of benefits, scuba divers should consider the many other places where they can improve their skills and see different environments.

There is truly something for everyone with scuba diving.