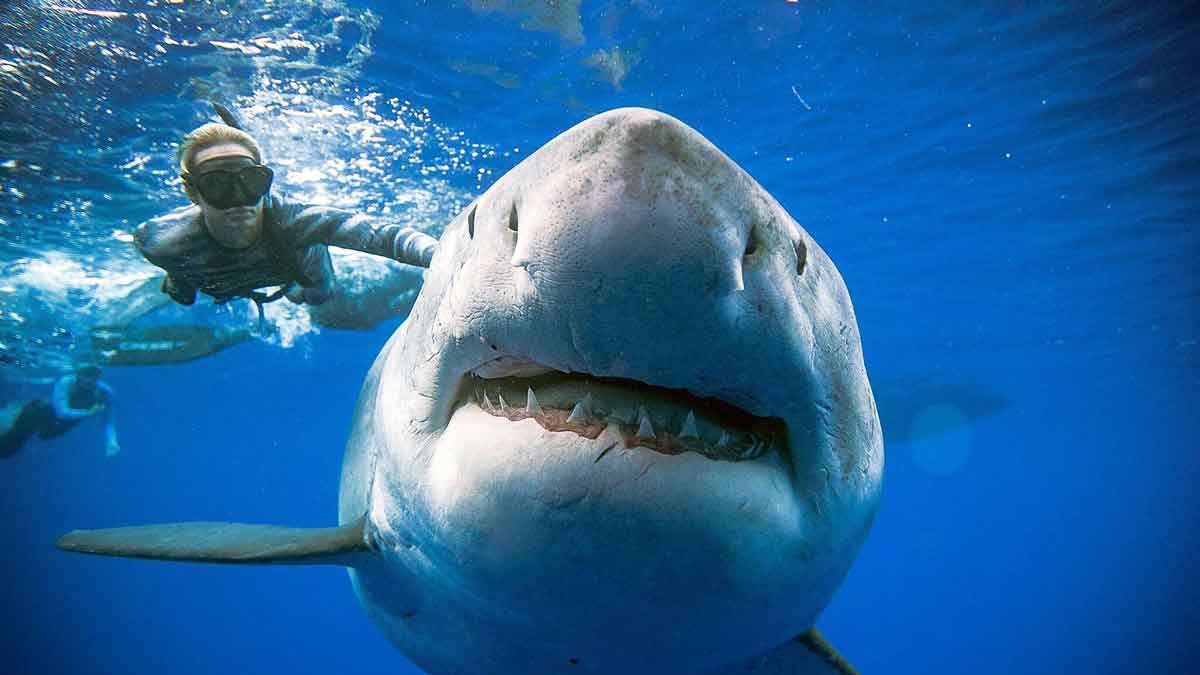 A shark is everyone’s scary fish. Since Jaws came out the idea of an underwater menace lurking in the depths is the foremost fear while being in the water.

There are not a lot of shark attacks every year yet people still worry as the fear of the unknown plays tricks with the mind.

Sharks are predators though so they do attack, and you may wonder what you can do. Thinking about what you might consider practical action in case you see a fin is perfectly normal. So what should you do if you see a shark while snorkeling?

If you see a shark or shark fin while snorkeling you should head to the nearest safe ground, whether a reef or shallow corals. You should swim quickly but rhythmically so you do not appear in distress. There are typically only 3 sharks that attack humans, namely the Great White, the Bull, and the Tiger shark. The sensitive areas of a shark are their eyes, snout, or gills where blows to these areas might cause the shark to realize their mistake.

I should preface this article by saying I have never seen a shark while snorkeling. Turtles and dolphins, yes. A shark, no.

Thankful they are quite rare.

This article comes to you from the point of view of research and having snorkeled before. I’m not a shark expert but after several hours of reading I’ve come up with an idea of what I might do. I am just offering my conclusions to you.

The general rule for snorkeling is not to touch anything, so snorkelers are normally pretty safe. The biggest risks are more likely cramps, injuries, and rip currents. The reality is sharks are very low on the risk scale.

Worldwide there around 80 shark attacks every year, of which anywhere between 4 to 10 are fatal. The reality is most people survive an aggressive shark encounter.

But that’s if you even see one, so what’s the likelihood of an encounter, let alone an aggressive encounter.

Is It Common To See Sharks While Snorkeling?

Sorry, it just plain isn’t. No snorkeling trip can guarantee shark encounters, other than very docile ones.

Not all sharks are classified as maneaters either.

The three that everyone worries about are

Reef, nurse, whale, and gray sharks are not dangerous to humans. Blacktip sharks are normally cautious around humans but can become more aggressive if in the presence of food.

So seeing a shark doesn’t mean you are in danger.

Most snorkelers and scuba divers haven’t seen a shark, even if they visit the Great Barrier reef often, which in 2019 experienced 3 shark attacks out of the 5 million visitors in the year, which was considered extraordinarily high.

How Do You Protect Yourself From Sharks While Snorkeling?

They say an ounce of prevention is better than a pound of cure, and that would make sense if you’re worried about sharks.

So your first act should be to try and protect yourself from an attack in the first instance.

Here are some tips to help out with that;

Tributaries – A heavy rain with flush soil and food into an ocean which will bring in sharks that feed on marine life. Seals and dolphins may congregate which the sharks may be attracted to.

Fishing boats – Fisherman are notorious for throwing cut up bits of fish overboard. The technical term may be offal, but again it attracts sharks that may feed on the seals and fish that will be attracted to the area.

Birds feeding – Birds have a ’birdseye’ view of the ocean and will swarm around schools of fish, which shows the presence of activity. Dolphins and seals are again attracted to the location and with it, passing sharks.

Dolphins and seals – These marine animals are attracted to the same prey as the sharks so anything that is attracting dolphins or seals will also attract a shark. The presence of dolphins does not mean the absence of a shark.

Snorkeling colors – Sharks are attracted to high contrasting colors. Yellow and white are said to be the worst offenders.

This has to be weighed in that bright colors can be highly visible to the human’s eye for safety and visibility of fellow snorkelers.

Shiny / reflective items – Items like watches or jewelry can reflect light well and look like a distressed animal to a shark. Avoid these items while snorkeling.

Urinating – As well as being attracted by blood, sharks are also attracted by urine. Urinating in the water will be a dinner bell to a passing shark that has highly sensitive lateral lines to detect fluids in the water.

Shallow ground – Always keep your bearings not only to the beach but also to the shallow ground which you can get to safely.

Group snorkeling – Staying within a large group makes you less likely to be attacked. Sharks do not attack large groups, so staying close to other snorkelers gives protection.

Low visibility – Bad weather and floods can cause turbulence in the water limiting visibility. This allows a shark to get a lot closer before you become aware of their presence. The last thing you want is to startle one either.

Swim rhythmically – Smooth and calm movement through the water is a signal to all marine life that you are healthy and thus able to defend yourself. You are a large animal to them so giving off the confidence in the water translates to being well protected.

By contrast, splashing around and thrashing away makes you look like a wounded animal, and this invites attack. Keep your snorkeling smooth and graceful. With slow methodical movements.

Surface – The surface is by far the more likely place to be attacked which is why surfers are particularly vulnerable. Occasionally diving down to the seabed will break up the pattern.

Drop offs – Areas, where there are steep declines in water depth, are often likely attack areas for sharks as they are good ambush points. Be aware of these underwater shelves like sandbars as well.

Dusk – The bull shark is known to have a preferential timing for feeding around dusk as the light is about to feed. Be aware as the sun goes down.

Practical Steps To Take If You See A Shark Fin

This is quite obviously everyone’s nightmare scenario. Snorkeling and suddenly seeing an unidentified fin gliding across the surface. Could be a dolphin, but would you take the risk?

Go for the nearest safety – Here is where remaining aware, while you’ve been snorkeling, comes in, as the nearest safety isn’t necessarily the beach, but could be a sandbar or a coral rock. On very shallow ground a shark cannot easily attack you.

Don’t urinate – Sharks are attracted to urine, so even though involuntary urination might be common, it isn’t a great idea as it tells the shark you are afraid.

Swim rhythmically – Again, this may be easier said than done, but if you can make your movements smooth. Splashing will make you look like you are in distress, again, inviting an attack.

Seabed movement – Depending upon how far safety is, you might be better off diving and going along the seabed to the shallower ground if you can. Sharks can contrast you easier on the surface, and more attacks happen there.

What To Do If A Shark Attack Is Imminent

While in close proximately to a shark where you believe an attack is incoming the rule is to do whatever is necessary. Playing dead often doesn’t work.

People have survived being aggressive and staring a shark down, so there’s no definitive answer. In some cases just pushing the nose away will let the shark know your position.

Often a shark will do a ‘bump and bite’ attack to test you, and if you let them bully you the shark could end up thinking you won’t defend yourself.

Defend yourself – If you have easy access to a weapon then fine, but you should be prepared to attack the shark. Reading shark body language is hard if you aren’t used to their presence but punching the snout, around the eyes or gills are sensitive areas for any shark.

Attack the eyes – Almost any animal will flinch or stop what it’s doing if the eyes are attacked.

With the three most likely sharks to attack, the great white, the bull, and the tiger sharks, the eyes are in the same relative place.

Have a look at the following picture.

You will notice that the eyes on all 3 sharks are about halfway along the jawline and 6 inches above. So punching and stabbing in this general area might cause the shark to reconsider its current course.

Also, the gills, another sensitive area, are directly in front of the pectoral fins on all the sharks.

Get to safety – Once released or after a close bump encounter, you should get to safety immediately. If you’re not injured that should be the nearest shallow ground.

If you are injured it will need to be the beach, so you can receive medical treatment as soon as possible.

Many sharks will not bite a second time as you are not a normal meal for them, and they may have realized their mistake, but a second attack cannot be ruled out, particularly if you’re bleeding.

It will be difficult but swimming rhythmically, albeit quickly, will give the signal that you aren’t fatally injured. Thrashing might make the shark think you are in severe distress and their attack was successful.

If you can get to the seabed to head inshore then that’s preferable.

While they do attack humans it is extremely rare. Around 5 fatal attacks happen every year, out of the millions that go into the water, and most of them are surfers, quite possibly mistaken for seals.

Often a shark bite is fatal, but the victim only receives one bite, as the shark realizes you are not an ideal meal.

The sharks you need to worry more about than the others are the Great White, Bull, and Tiger sharks. They’re the three most commonly associated with attacks on humans.

Sharks can attack whether it’s a provoked attack or unprovoked. Bump and bite attacks can result in fatalities, so showing some defense if you sense they are getting aggressive a punch or stab in a sensitive area will let them know you are prepared to defend yourself.

So, if you see a shark, head for safety, but if you are in close proximity then a shove or punch will let them know. If they are trying to bite you, go for the eyes, the snout, or the gills with any weapons you can find.