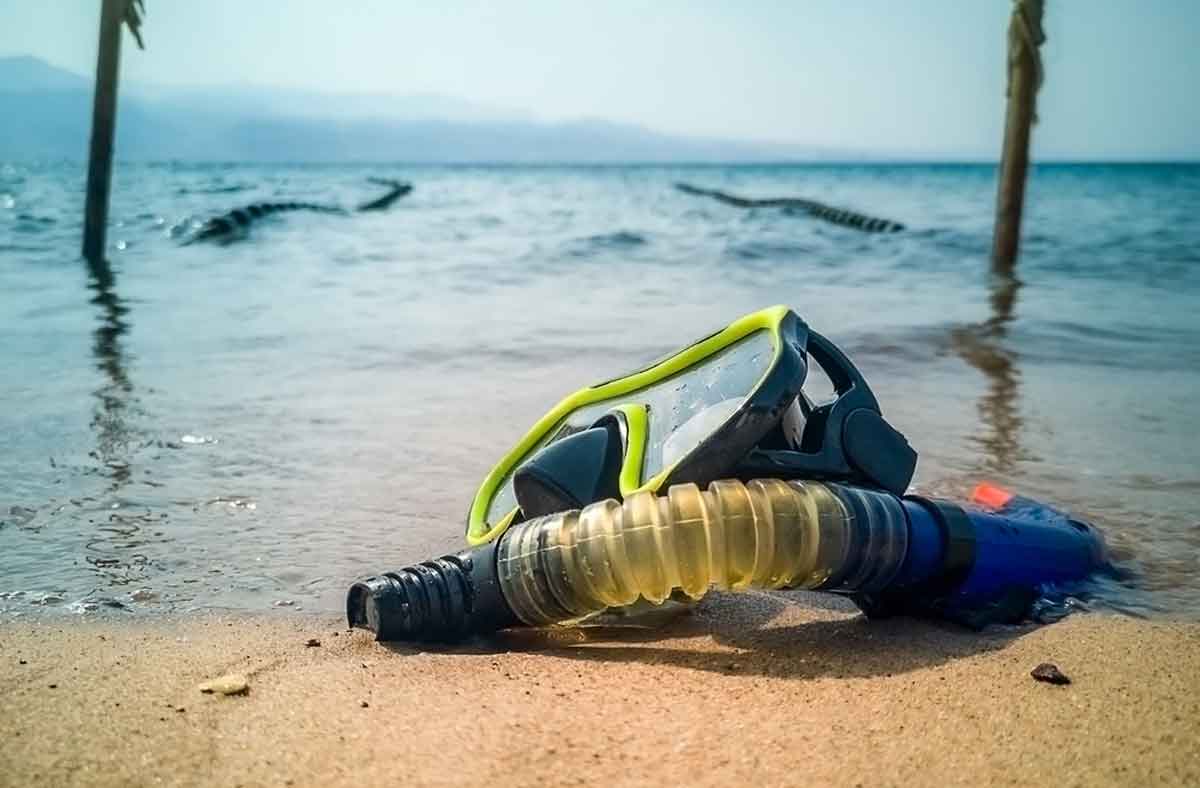 Snorkels almost certainly started as reeds, with soldiers and hunters using them to hunt or remain unobserved underwater.

As snorkeling became a more recreational activity, designers got to work and started improving on the basic tube. You can certainly use a basic plastic snorkel tube to go snorkeling, but returning to the surface after a dive required an expulsion of water from the tube.

A solution needed to be found, to make it easier. The designers started using a purge valve on the bend in the snorkel tube. If you are new to snorkeling you may be wondering what a purge valve is, and what it does? So, what is a purge valve on a snorkel?

The purge valve on a snorkel is a one-way valve that drains water out of the snorkel. When you resurface it will drain water from the tube, and any ingress of water into the snorkel can be ‘blown’ back into the ocean with a small exhale. A purge valve makes the act of breathing while snorkeling considerably easier.

You may think it drains slowly, and it can’t possibly work. Let me tell you, a full snorkel that has been filled as you dive will drain in split seconds as you resurface.

A little bit of water will remain, allowing a slow expulsion of air to blow the water in the snorkel back out into the sea. The snorkeler can then resume breathing while remaining face down in the water.

So What Does The Purge Valve Do?

The purge valve is the water drain reservoir on the bend of the snorkel. While it looks like an overly lumpy bit of plastic to carry around, it is phenomenally useful.

A snorkel seems like a simple bit of kit, but the addition of a purge valve can dramatically alter how a snorkeler uses it.

Once a snorkeler dives with a classic snorkel it will fill with water. When they return to the surface, water remains. Traditionally, you would have to blow out the stagnant water before resuming breathing.

After holding your breath on a dive this was exhausting over time. The purge valve changed all that.

The purge valve allows water to drain out of a snorkel, via gravity or a small expulsion of air.

It’s a one-way valve, so water does not come in through the valve. Underwater the tube will not fill with water. The only way water can get into the snorkel is via a poor mouthpiece seal or through the top of the breathing tube.

You could pour water in through the top of the snorkel and it would just pour out through the purge valve.

Before snorkels without purge valves, expelling the water was rather a chore. Lungs bursting from a dive were still needed to blow the water out of the tube if you wished to remain viewing beneath the surface.

As a result, many didn’t bother. They broke the surface after a dive and drained the water through gravity and breathing sea air without the snorkel in their mouth.

How Does The Purge Valve Work?

A classic snorkel, those without purge valves, is just a tube of plastic. Thus water in the snorkel could only come out of the two entrances.

With a huge amount of water in the tube, it will just gush out, like when you resurface after a dive.

Should water enter the tube while face down on the surface, there remains the possibility that water build-up will block airflow.

A light exhale will push the water back out into the ocean. It doesn’t require a forceful blow, just a light exhale. It makes snorkeling a lot easier.

Do You Need A Purge Valve On A Snorkel?

There’s no right or wrong answer to this question, as you can snorkel without one. Many snorkel rentals may even be classic snorkels without one.

Their usefulness, however, is increasingly being taken up. They make snorkeling much easier, so experienced snorkelers will have a drain valve as a matter of course.

You can dive, snorkel, dive again, and resurface all without breaking the surface. It allows for a more continuous experience.

It’s also cured the age-old snorkeling problem of water into the snorkel. Large waves, splashing, and dives all require clearance of water from the tube.

For people who don’t like swallowing water or that feeling of water in the tube, it’s been a huge boon.

Whether you decide to get a snorkel with a purge valve or not, they are fast becoming a necessity. Not in the classic sense, but they make snorkeling so much more of an experience, and remove some of the more annoying aspects, that’d be foolhardy to deliberately not get one.

The snorkeler can now remain face down in the water to watch the aquatic life without effort. No massive expulsions of air are needed, as you can breathe easily with simple exhalations.

The underwater world, with a purge valve, is a much more satisfying experience.