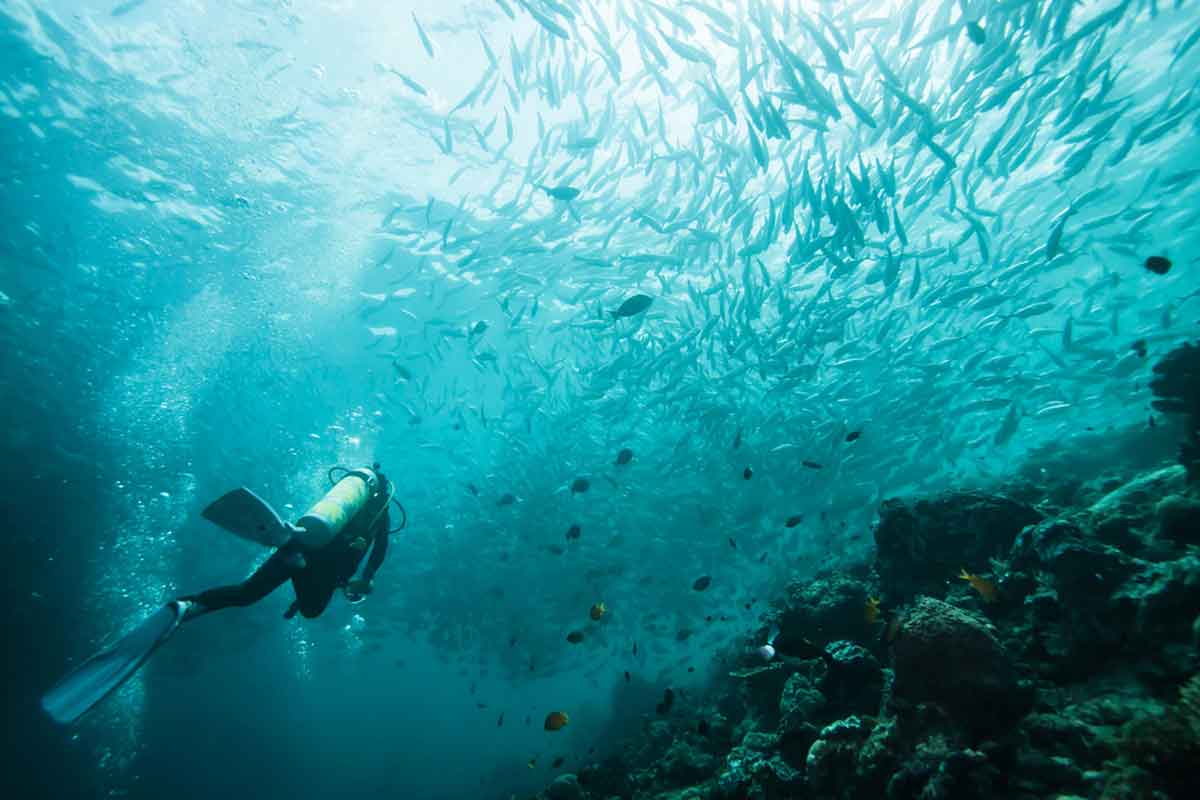 Anyone who has ever taken a diving class has heard the term safety stop.

While seasoned scuba divers are likely well versed in safety stop rules, new divers may be curious about the function and rationale. So what is a safety stop and do you need one?

A safety stop occurs near the end of a dive when a diver stops their ascent at 15 – 20 feet and remains there for three to five minutes. This allows nitrogen to gradually be released from tissues before proceeding to the surface, reducing the likelihood of decompression sickness.

While this provides an overview of a safety stop, there are many things to understand about why this is such a critical aspect of diving.

In this article, we will take a look at the on-gassing and off-gassing process and answer some common questions about safety stops.

What is On-Gassing and Off-Gassing?

On-gassing and off-gassing refer to the process through which your body absorbs and releases nitrogen during a dive. Typically, our bodies contain a relatively tiny amount of nitrogen in them from the air we breathe.

As you dive, you experience increased pressure on your body. This compresses the nitrogen already in your body with the atoms becoming closer together.

The space this creates allows you to absorb more nitrogen from the air in your tank.

Essentially, this process continues throughout a dive until the point that your body reaches nitrogen saturation – meaning that it cannot absorb any more.

This is a point most divers are unlikely to reach during recreational dives.

Where does this nitrogen go? It, along with the oxygen, is dissolved from your bloodstream and mostly enters your tissues.

Your tissues burn the oxygen for energy, but the nitrogen remains.

As you might expect, the opposite effect occurs as you ascend.

Shallower depths mean less pressure, allowing the nitrogen to expand. This causes your tissues to begin to release the nitrogen, a process called off-gassing.

These bubbles then are able to cause havoc in your body, potentially blocking blood vessels and causing major health problems.

This is what is known as decompression sickness or “the bends.”

Many divers may wonder the reasoning for the 15 to 20 foot guideline for safety stops.

There are very good reasons why this is the ideal distance at which the stop occurs.

Think about what we know about pressure experienced during diving.

At the surface, we have one atmosphere of pressure. At 33 feet, we experience two atmospheres. This number goes up by one every 33 feet due to the pressure of the water column above us.

When you ascend from 99 feet to 66 feet, your pressure reduces from four atmospheres to three, a reduction of 25%.

However, when you ascend from 33 feet to the surface, you move from two atmospheres to one, a reduction of 50%.

Thus, the greatest proportional change in pressure is experienced near the surface.

Thus, before engaging in this last bit of ascent, a three to five minute safety stop provides divers with an opportunity to let their body off-gas more nitrogen, reducing the likelihood of getting the bends.

What if I Have Trouble with Buoyancy?

A safety stop can be a concerning situation for divers who have trouble with buoyancy. However, it is an important skill to master. There are a few tips and tricks divers should consider.

First, if you’re a certified diver, you’re instructor may have used the phrase, “Don’t ride the elevator to the top.”

This refers to the situation of a runaway ascent. If you have air in your BCD when you are at depth, this air will expand as the pressure decreases during your ascent.

This can lead to your air rocketing you towards the surface. There are many ways of addressing this, but they all involve venting some of your air before ascending.

Some divers vent all their air and kick up; others leave some air in. The approach will vary by comfort level

Additionally, new divers may have concerns about remaining at a stable depth in open water. For divers still learning how to master buoyancy, consider ascending on a line.

This allows you to have some support to stay in place at the safety stop area until you make adjustments to your BCD to achieve buoyancy at that depth.

An experienced diver will be able to control their depth during the safety stop simply by breathing. If you start to rise, breathe out to drop a bit. If you start to sink, breathe in. You may also slightly inflate or deflate your BCD if that is an issue.

Finally, it is important to pay careful attention to your depth gauge during the safety stop.

Open water does not have visual landmarks and it can be deceptively easy to rise or sink without realizing it. Keeping an eye on your gauge will ensure you stay in the 15 – 20 foot area of the safety stop.

Are There Any Situations Where I Can Skip a Safety Stop?

This is not surprisingly a common question.

After all, divers want to maximize their time at the bottom where there is more to see.

The short answer is that a safety stop should always be incorporated into your diving plan.

You may have heard about a number of situations where you can “skip” safety stops. For example, the old belief is that a diver is unable to get the bends in less than thirty feet of water.

This has proven to be a myth.

While it is less likely, there have been many documented cases of the bends in less than 30 feet of water.

Additionally, divers who have a nitrox certification may believe they can skip a safety stop. Nitrox is a mixture that has a higher concentration of oxygen (and thus less nitrogen) than a typical tank.

This means less on-gassing occurs and divers can dive deeper and stay deep longer. However, safety stops should still be included for nitrox divers.

In addition to providing an opportunity to off-gas, safety stops have other benefits. Namely, they allow divers to assess the situation at the surface. This includes noting any boat traffic or other dangerous conditions.

Thus, safety stops should be imperative for every diver.

Safety stops should be mandatory parts of any dive.

The safety stop, for three to five minutes at a depth of 15 to 20 feet, allows for accumulated nitrogen to off-gas, releasing from your tissues in a controlled manner.

The specific depth of a safety stop is chosen to allow large quantities of nitrogen to off-gas prior to ascending the last portion when changes to pressure are greatest.

Safety stops prevent decompression sickness and also provide an opportunity for divers to assess the surface in order to determine if there are any safety hazards.