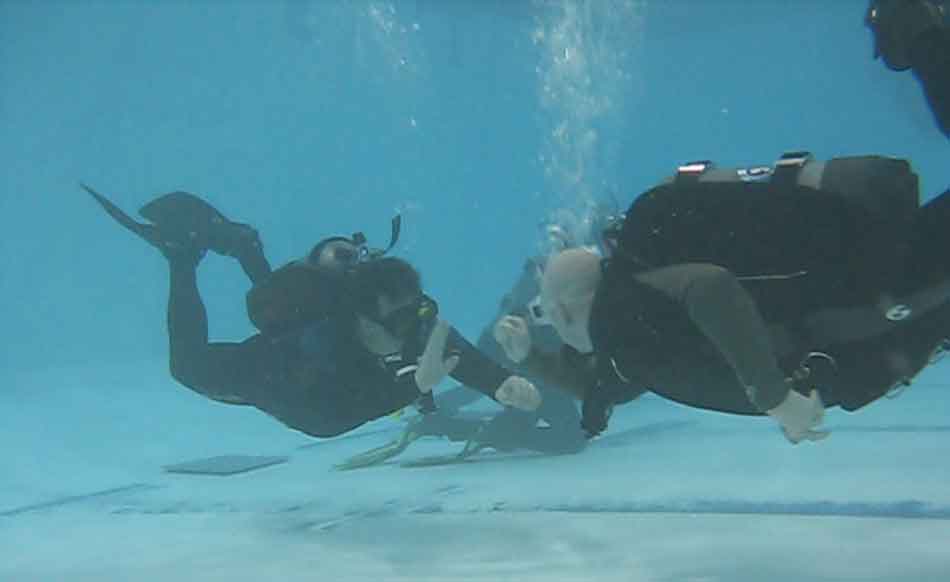 For a potential scuba diver, it’s probably the scariest situation you can imagine.

Breathing in, hoping for all sustaining oxygen, only to be met with nothing.

When you’re beneath the waves, you quickly understand just how critical oxygen is. After all, your scuba tank and regulator become your lifeline.

Is it possible for a scuba diver to run out of air? What situations cause this and what do you do if this happens to you?

These are very important questions and things that every diver needs to be aware of. So, what happens if you run out of air while scuba diving?

With proper air management, this should not be an issue. However, if you run out of air while scuba diving, the biggest key is not to panic. Your response will depend upon a quick assessment of your environment and can include anything from an emergency ascent to buddy breathing.

Let’s take a look at some common causes of running out of air and the various things to do should that happen.

Causes of Running Out of Air

This is by far the most common reason that divers run out of air.

When you scuba dive, you have gauges that show the amount of air currently in your tank. You should monitor your gauges regularly and communicate with your buddy so that you know one another’s levels.

Unfortunately, many divers feel too comfortable or simply forget.

This can be problematic if a situation in your dive is different from normal, resulting in you expending oxygen more quickly.

On my first ever ocean dive, my buddy did exactly this, leading to him making an emergency ascent early from the safety stop.

While a recreational diver may be content diving in shallow reefs, there are often reasons people want to dive at greater depths.

Most shipwrecks require deeper diving while even some reefs have deeper areas where you can see some impressive things.

It is important to remember that you expend air much faster at greater depth because the air becomes more compressed.

While a typical aluminum tank will give you 70 minutes near the surface, this will reduce to 17 minutes at 100 feet.

Additionally, deep dives require more gas for decompression stops. Running out of air at a deep dive will greatly increase the risk of decompression sickness if an emergency ascent is needed.

Expending Too Much Energy

One thing that surprises people when they first start diving is that divers typically strive to expend as little energy as possible.

This is because working too hard increases your breathing rate and burns through your oxygen.

There are many things that can cause this during a dive.

Dealing with a particularly rough current is perhaps the most common cause. Diving with a new buddy may also find you expending too much energy if they can swim faster than you and you struggle to keep up.

Communication and attention are important.

This is a fairly tough one because many scuba divers have too much pride to recognize their anxiety or sometimes simply minimize it.

However, many people have anxiety about diving, particularly when first beginning.

If you are anxious, you will go through your air more rapidly. So, if you are having an anxious day, pay extra attention to your pressure gauges and remember to effectively communicate your air levels with your dive buddy.

Buoyancy control is not a flashy skill but is one of the most important skills for divers.

When you scuba dive, you want to ensure that you are as neutrally buoyant as possible. If you are not buoyant, you’ll expend more energy fighting to keep from bobbing up and down.

Another problem with poor buoyancy control is that many divers compensate for poor buoyancy by frequently adding and dumping air through their BCD.

This uses a large amount of air and will greatly reduce the amount of time you are able to stay under the water. Buoyancy control is critical to better diving.

While scuba diving equipment is fairly reliable, there are problems that can occur that can reduce your air.

Perhaps one of the most severe is a free-flowing regulator which will quickly go through your entire tank.

However, other issues include leaks or tears in your BCD, computer errors with your pressure gauge if you have a more advanced system, or a burst O-ring. Another issue can be a tank that is not fully opened.

If you do run out of air, there are a variety of options. These vary considerably based on the environment including your depth level, the problem you encounter, and how close you are to a buddy.

Let’s take a look at the various options.

This is the most preferred method and why divers should generally dive with buddies. If your buddy is closer than the surface – and they should be – go to them to share their air. Communicate to them your needs and grab their backup regulator.

Once you have air, abort your dive and the two of you should work together to make a slow, controlled ascent to the surface.

If you have enough air, ensure that you stop for your safety stop if you require one.

Some divers carry with them redundant air systems, typically in the form of a small additional air tank. These are typically called pony tanks. The purpose of this is to eliminate the need to share air, providing you with a more rapid source of air in the case of problems.

This will typically give you some extra air to make a more controlled ascent to the surface. It is important to note that these are most effective for shallow dives as they will not last very long at deep depths.

Ideally, a normal ascent is the best way to surface. If you catch your air supply when you are extremely low, this may be possible.

Simple ascend at a typical rate. Remember that as you rise, the air in your tank will expand, giving you more air to breathe.

Thus, it is possible that you will be able to recover enough air to complete a typical ascent. Note that you may also have to dump air out of your BCD as you ascend to keep from rising too fast. This is one of the easiest things to forget during an ascent if you are stressed.

Known as an ESA, this is a skill that you should have practiced during your open water certification course. This type of ascent is faster than a normal ascent with the goal of quickly reaching the surface.

To conduct an ESA, you swim upwards while breathing out and with one hand raised. The breathing out is to ensure that you don’t hold air in your lungs that expands, potentially causing injury.

The raised hand is to prevent your head from striking something at the surface.

There are many things that divers can do in order to enhance their ability to manage air. Here are some basic tips.

Running out of air is an understandable thing for new divers to worry about.

However, the reality is that if a diver pays attention to their air supply, it is likely that they will never run into this issue.

Scuba equipment has multiple fail safes that reduce the occurrence of major problems. Human error is the major cause of running low on air.

When diving, be sure to know the effects of things like exertion, anxiety, and depth on air consumption.

Monitor your air supply and be familiar with the various safety maneuvers should you or your buddy encounter a situation where you run out of air.