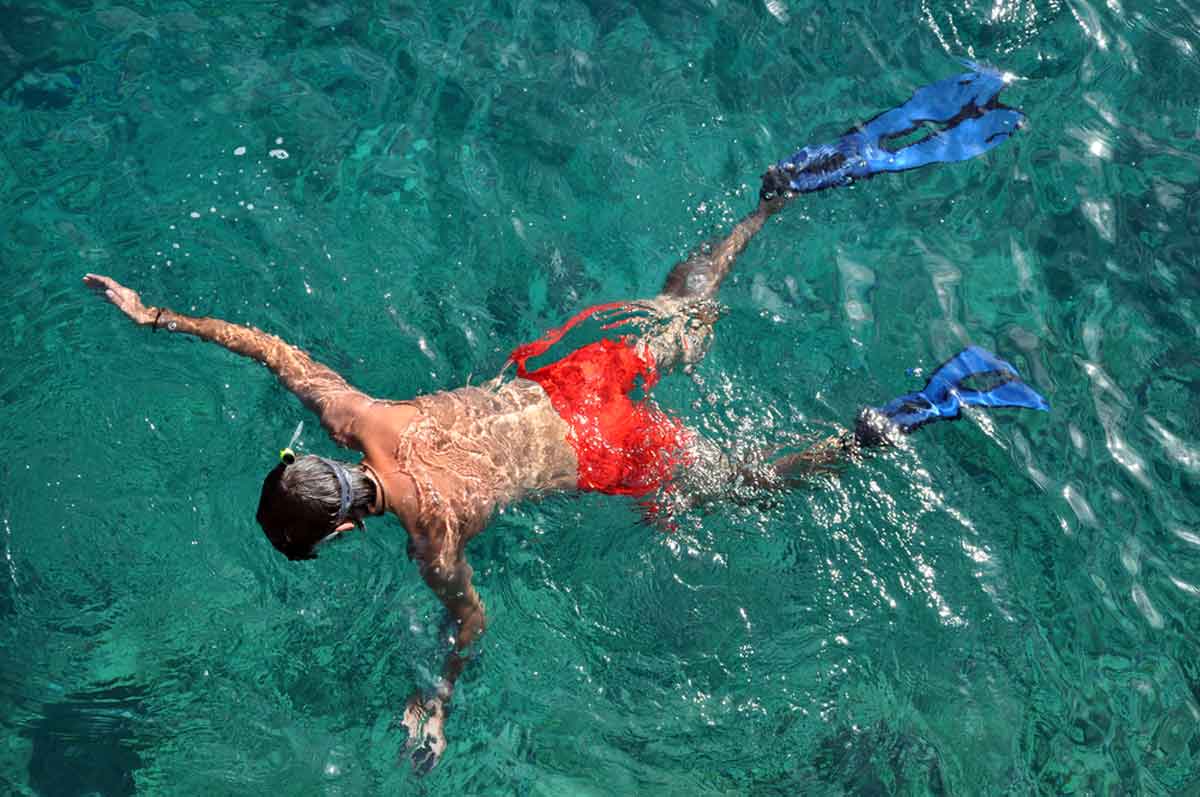 Although fins aren’t strictly necessary for a snorkeling excursion they are almost indispensable if you want to truly explore in safety.

Fins will allow you to swim efficiently in the water, and propel you forward with less effort. They can also make a snorkeler safer as they can allow you to get to safety quicker with some explosive effort.

Snorkeling fins have been around for over a century, and you might think there hasn’t any effort into improving their efficiency.

Fins come in many different styles, one of which is split fins. But what exactly is a split fin for snorkeling?

Split fins for snorkeling look like normal full bladed fins but with a central ‘split’ effectively creating two blades of the fin. They are suitable for flutter kick snorkeling where the blades twist to provide forward momentum much like a propeller. Split fins are appropriate for a beginner as they provide more efficient snorkeling and reduce the likelihood of cramps and leg fatigue.

It can be a bit of a debate at the best of times as to whether a split fin is suitable, but frankly, it’s very much personal preference. If you prefer a split fin then that’s fine.

What’s known as the paddle fins, full bladed fins, or just full fins are worn by many people but split fins also have their devotees as well.

What Is A Split Fin And How Do They Work?

Instinctively you might be able to work out why a fin is a good idea for snorkeling and how the full bladed fins work in the water.

Water is 830 times denser than air and naturally produces resistance when moving through it. A swimming kick works on the principle of that resistance producing forward momentum as you kick.

The blades of a scuba fin exaggerate this forward momentum to further propel you forward. As the full bladed fin moves through the water, the water resists that motion.

Newtons 3rd law states that to every action there is an equal and opposite reaction so that resistance works to propel the snorkel forward.

Fins don’t move you in the air because there’s no resistance to push against. The air just moves.

While your feet produce a little forward propulsion, the blades from fins provide great movement forward which allows a snorkeler to either expend less energy or move faster for the same energy expended.

A useful safety ability if you are snorkeling in a location known for currents.

Split fins work on a similar but not identical principle.

During a kick cycle, the key point for a split fin is that the blades will twist much like propeller blades. The effect is much the same.

There instantly becomes a pressure difference and the water moves from the high-pressure area to the low pressure, a physical law that effectively moves you forward.

This is quite efficient, as you might guess from the tail of a goldfish, and the leg strokes do not need to be quite so deep.

Shallow, faster kicks are available to those using split fins over the full bladed variety.

The twist from the split fins can also work as the leg does an upstroke. You get a much more even propulsion with a split fin, as the whole kick cycle produces forward propulsion in even amounts.

Are They Better Fins For Snorkeling

Split fins are said to have been designed by looking at the propulsion of marine animals. Years of evolution has provided us with the understanding that marine animals will develop towards the most efficient form of forward movement.

The effort required with split fins is lower than a more traditional fully paddled fin, thus faster kicks are preferred rather than forceful kicks.

You may be wondering why everybody isn’t using them. After all, if seals, whales, and goldfish have been honed by this method then why don’t they dominate the market.

Well, they have a series of pros and cons on how humans use them.

The Pros Of Split Fins

For beginners, who typically will flutter kick like a swimmer these fins are ideal. They are much less effort to contort and twist which provides the forward propulsion. For the newbie snorkeler, it will make them more streamlined on the surface.

As the fin doesn’t displace the full water thrust from the ‘back’ of the fin they are much easier to use. Water displaces through the split making them easier to move through the water.

Again, for a beginner who hasn’t built up the requisite muscle strength, they are great to use and can lead to a much decreased occurrence of cramps and leg fatigue.

This is important for safety as well.

In calm waters where you are going to be snorkeling for a prolonged period of time these fins come into their own, as they’re easier to use over the longer durations in water.

The Cons Of Split Fins

While split fins make a good choice for a beginner, the more experienced snorkeler may choose not to use them.

They are more used to finning, and while snorkeling is relatively simple, different kicks are used in scuba diving. The frog kick is used for fine movement.

Certain kicks require the resistance of the blade to work, and a full bladed fin works much better.

Area for area, a full bladed fin will provide more force to propel the snorkeler forward than a split fin.

This will be useful in specific conditions, namely against a current or when you are carrying extra weight.

If as a snorkeler you have tides and currents to worry about, then a full bladed fin will fight against it much better.

You aren’t constrained by a single set of fins so you can always have both, some split fins, some travel fins, and a set of full bladed fins.

If you are a beginner at snorkeling then split fins could well be the better option. Vacation snorkelers could well make life easier on themselves with a set of split fins.

They require less overall strength, and work better with shallow flutter kicks more used by the occasional snorkeler. They are much more efficient and less likely to give you aching muscles than the full bladed counterpart.

They also reduce the likelihood of cramps, a major problem for those new to the movement through the water.

Instructors would recommend that you should match your fins to the snorkel you are about to attempt. If it’s calm flat waters then split fins will work fine.

If you might be in a stronger current or anticipate going underwater and needing fine movement, then full bladed might be better.

Split fins are not inherently ‘better’ than paddle fins, as they are used for a different environment.

What sort of kick you propose to use, your experience level, and whether you have restricted movement of any kind all play an important part.

To reiterate, split fins are great for a beginner, or a vacation snorkeler, or anyone who is going to snorkel in those calm problem-free conditions.