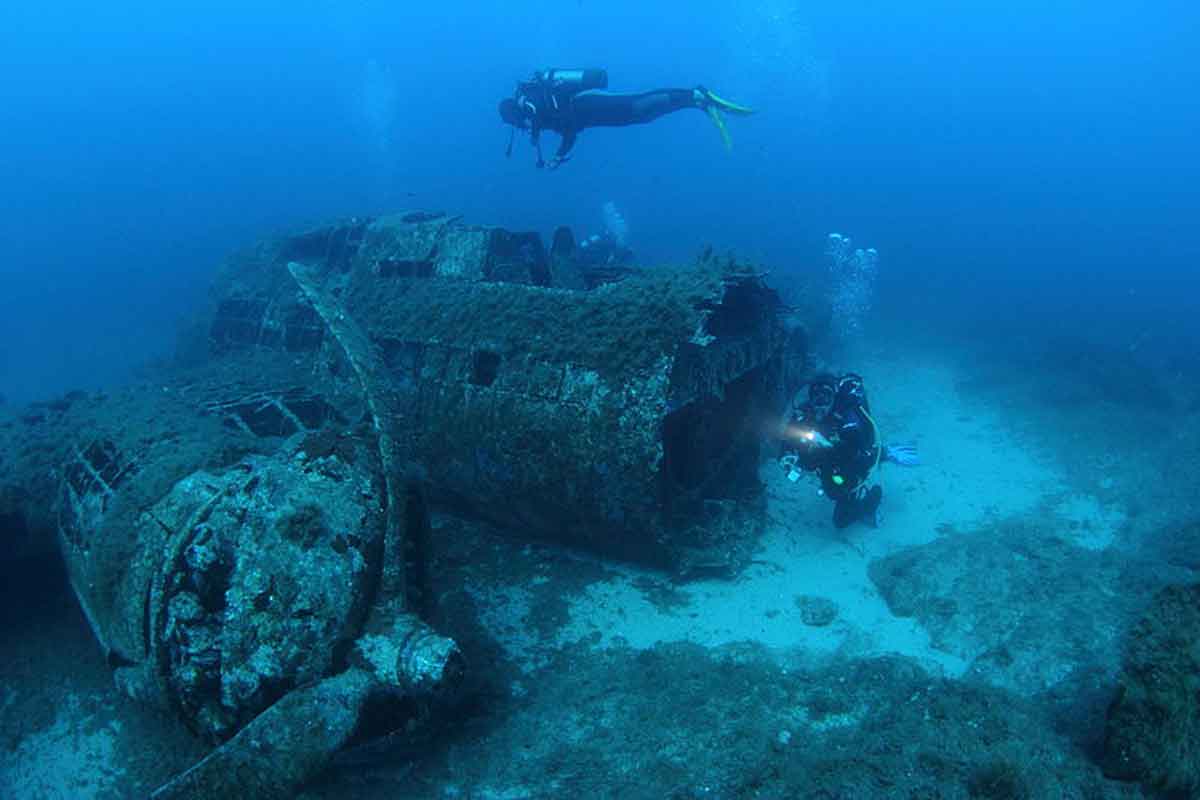 Scuba diving takes participants all over the world. It’s largely one of the attractions. No matter where you are, if you’re near the sea then you can rent some gear and descend beneath the waves.

Everyone gets into scuba diving for their own personal reasons. It can be for a sense of fun, adventure, and a chance to explore the normally unknown.

Scuba diving has a wealth of experiences for divers to enjoy, from the simple act of being amongst the aquatic wildlife, gliding across beautiful corals to the much more explorative cave diving.

While shipwrecks can provide some interesting diversions to visually impressive sights to see, especially from a historical perspective, they aren’t the only option.

Thanks to human history and human ingenuity there are an impressive set of aircraft wrecks beneath the waves. While some military aircraft will have sunk beyond recreational diving depths, many remain available for viewing.

So what are the depths for scuba diving aircraft globally?

Aircraft wrecks available for scuba diving globally typically range from around 40 to 120 feet. A basic open water certification will get you to around 50% of the planes beneath the waves and advanced open water takes you most of the rest. Only a few are beyond advanced water diving depths.

Everyone has a dive depth that they are comfortable with, so if you have a specific limit for depth but desire an aircraft wreck to dive, then combining the two takes some research.

With that thought in mind, I went round the internet to find as many viewable aircraft that could be seen while scuba diving and noted the depth at which they were sunk.

I was rather surprised in that I couldn’t find a massive list somewhere. I’d always assumed, somewhat incorrectly as it turns out, that there would be a plethora of available aircraft to dive.

I could only find just under 20 around the globe, which doesn’t seem a great number. To be fair, there may be plenty more, just not really in a known scuba diving locations where access to rental equipment and tours are available.

If you know of any more, then let me know and I will add them to the table.

Only the Bristol Bomber in Malta, the B-16 in Papua New Guinea, and the B-24 Bomber in Croatia are beyond advanced open water depth which is 100 feet.

If you are a beginner to scuba diving and have a desire to see a historical wreck with your skills, then there is some good news.

Once you pass the open water certification, there are many available that are within the required depth. Many are even quite shallow, having been deliberately sunk purely for the purpose of recreational diving.

For the deeper dives, some dive tours require Nitrox certification.

The Airbus 300 in Turkey didn’t get to that location naturally, and the same goes for the Boeing 747 in Bahrain.

Never done it but I would imagine diving a historical aircraft with a genuine story behind it is a fascinating way to spend your time beneath the waves.