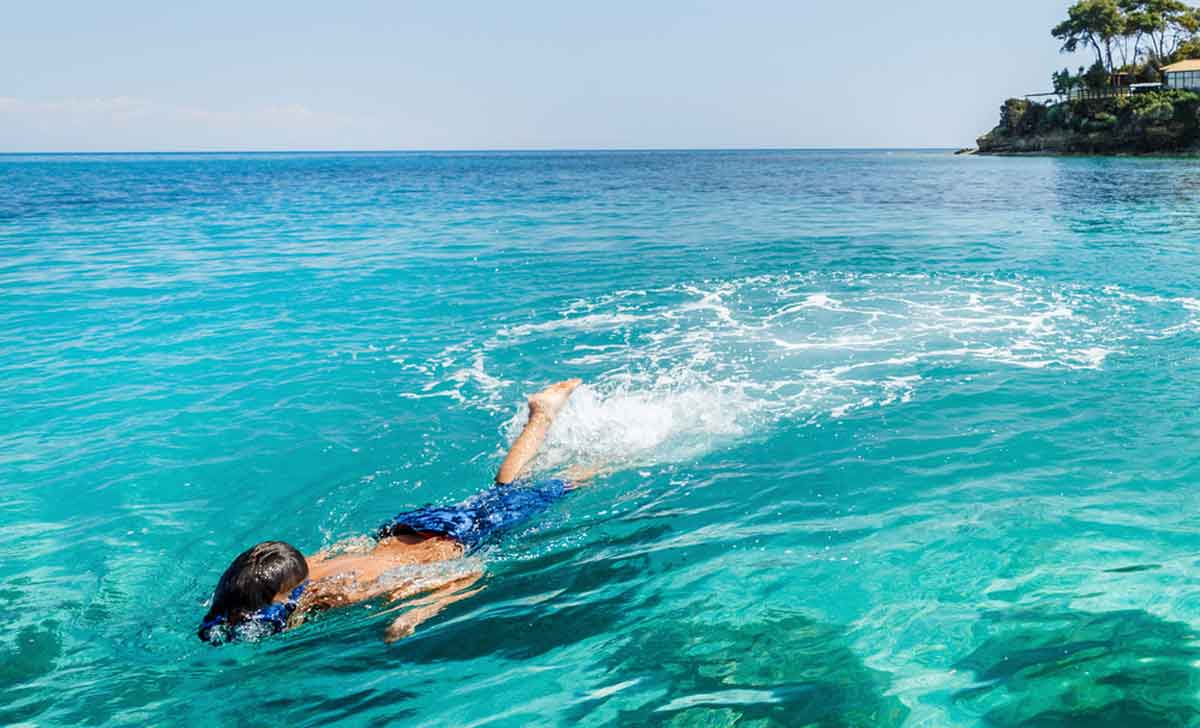 Snorkeling is an activity now enjoyed by thousands of people worldwide. The tropical destinations of the world entice many to mask up and take to the water.

Whether they come from a cruise ship, are inherent travelers, or have taken to the sport, men and women of all ages glide across the surface looking at the wonders below.

Although thought of as an easy activity, and it can be, practice will bring better breath control and stronger muscles.

Because of the variety, stunning worldwide locations, and some of the most breathtaking underwater nature snorkeling is very rewarding and attracts many.

Like any activity developed by mankind, it has its origins and history to marvel at.

Here is the snorkeler’s journey.

There’s no precise record of when snorkeling began. It’s entirely possible that Neanderthal man used hollow reeds to hunt below the surface.

According to the Minewarfare & Clearance Diving Officers’ Association, the cited work by Sir Robert Davis who wrote the book Deep Diving & Submarine Operations who presents evidence of pearl divers in 4500 BC dived for their products by holding their breath.

Some sort of device was needed so that a human can maintain their presence underwater.

The earliest evidence that is recorded are the sponge farmers from Crete, an island in the Mediterranian, just off modern day Greece.

These farmers of the seabed used hollow reeds to continually breathe beneath the surface so they could remain underwater collecting the sea sponges.

Sea sponges were used much like today, as they possessed soft and abrasive material to clean cookware and utensils.

The first snorkelers then were likely to be farmers, who traded sea sponges on the markets of ancient Greece.

There are carved artworks in the British Museum (circa 865BC-860BC) that appears to depict a soldier underwater breathing from animal skins.

There’s some debate as to whether it’s a flotation device or underwater breathing equipment, but there is a fish visibly present suggesting it’s underwater.

Whether this is snorkeling or not is debatable but it’s an interesting incident on the technical evolution of equipment.

A Greek Attack On The Persian Fleet

The use of primitive snorkeling equipment has been used for both farming and hunting, and eventually it becomes used as a war technology.

In 480 BC it’s recorded that the Greek army used snorkelers and swimmers to cut the moorings of harbored Persian ships in the harbor.

Pausanias, a Greek geographer, and traveler who wrote many books recites a story involving the Greeks and Persians.

In 480 BC, Xerxes a Persian ruler was mounting forces at Thermopylae. The Greek – Persian wars were raging. Xerxes was playing on sending 200 fully armed warships to battle the Greeks.

Xerxes had previously hired two Greeks, Scyllias and his daughter, Hydna who was a fabled swimmer. They had been aboard to recover treasure to continue the was from a sunken Galleon.

They recovered the treasure, but Xerxes would not let either Scyllias or Hydna go back to Greece, fearing they knew too much about his battle plans.

During a storm, the Persian fleet anchored in the harbor. Scyllias and Hydna seized their opportunity.

With knives in hand, they slipped overboard and swam among the moored boats, and cut the mooring lines.

They are said to have slipped away, using primitive snorkels to remain undetected. Other reports have mentioned they arrived at the Persian fleet using the same snorkeling technology.

The Greeks erected a statue to Scyllias and Hydna at Delphi for their bravery.

The Greek philosopher Aristotle, is known to have described primitive diving equipment in the form of a diving bell in the 4th Century BC.

They were very rudimentary it appears with just upended cauldrons put into the water so that scientists and explorers could go beneath the waves and breath.

Alexander the Great is said to have explored the Mediterranean using this style of technology.

It took until 1535 when Guglielmo de Lorena was said to have used the very first diving bell, which was worn on the shoulders yet supported by slings.

Alexander the Great may have been responsible for early attempts with a diving bell, but the contraption was a huge bell to trap a large amount of air during its descent into the water.

The device allowed multiple divers to go deep to the seabed and a team could enjoy longer times at depths rather than relying on returning to the surface.

Guglielmo de Lorena, in 1935 invented a weighted chamber that has since become known as the first diving bell.

The chamber was lowered into the water with cables and was capable of keeping 1 person underwater with regulated air. It was atmospheric pressure so a single person could survive.

Air was pumped down pipes to keep consistent air flow in the later variations.

While the diving bell was the technical invention of the day, as it allowed a great deal of time underwater, the reality is it was extremely cumbersome.

If you wanted to move the diver who had a short range away from the bell, the whole equipment needed to be moved, no easy feat.

Exploration was taking a long time, thus there was a need for mobility.

The most famous renaissance men of them all, Leonardo Da Vinci has marveled the world with his technical brilliance and his ability with the arts.

Leonardo sketched many underwater ideas, including the submarine, but perhaps of interest is the curved tubed snorkel, allowing a diver to be face down in the water but breathe surface air.

He also came up with a rudimentary diving suit.

The diving bell had a problem though. More than a few feet beneath the surface, the pressure brought to bear by the water made breathing difficult.

Divers wished to go deeper, to explore further. Underwater exploration was about to take a large step forward.

It was a wearable device that allowed a diver to venture further beneath the water’s surface for an extended period of time. This device is now considered the forerunner for the Self Contained Underwater Breathing Apparatus (SCUBA).

The Inventor Of Fins

They were produced in 1939, but production was sold to Owen Churchill.

The fin design was featured in the very first film of SCUBA divers, and Corlieu went on to captain the French Navy during World War 2.

Guy Gilpatric is considered the inventor of the sport for those into the modern sport of snorkeling.

He was born in January 1896, and took initially to the air at a young age. Starting as a test pilot, but gravitated to a fighter pilot on the advent of WW1.

In the snorkeling world, he’s famous for publishing ‘The Compleat Goggler’ in 1938. The title was a slight nod to the famous angler, Izaak Walton, who published The Compleat Angler in 1653.

The book was an instructional manual for the building of the equipment needed for spearfishing, including the goggles (the mask), snorkel, and fins.

Jacques Cousteau, who made a name for himself as a naval engineer and underwater photographer, is said to have been inspired by Guy Gilpatric’s book.

The snorkeling technology you see in shops, photographs, and movies has not come out of nowhere.

It has been invented, tried, tested, and improved upon by some of the finest minds in history. Whether for sea exploration or warfare, snorkeling has made a mark on history.

Modern equipment is made from the superior materials of the day, and now features more advanced needs, like float valves, and modern synthetics to improve the experience.

Safety standards have improved with mask lenses, and minor improvements have been found in all equipment over the years.

They say the sea is a harsh mistress, and the materials have also been improved upon, from the synthetic rubbers to the coated lenses to reduce fogging.

Modern snorkeling is the pinnacle of inventiveness, experience, and contemporary science.

Snorkeling today has moved beyond the need for collecting sea sponges, and sinking invading naval armies.

The technology being used today, far surpasses what previous inventors could have dreamed of, and thousands of people every year get to experience some of the most breathtaking views available to anyone.

It’s fascinating to contemplate, that what started as a survival necessity, has traversed to this point.

All the history and inventiveness of mankind has got us to this point, so we can enjoy the natural world in all its splendor.