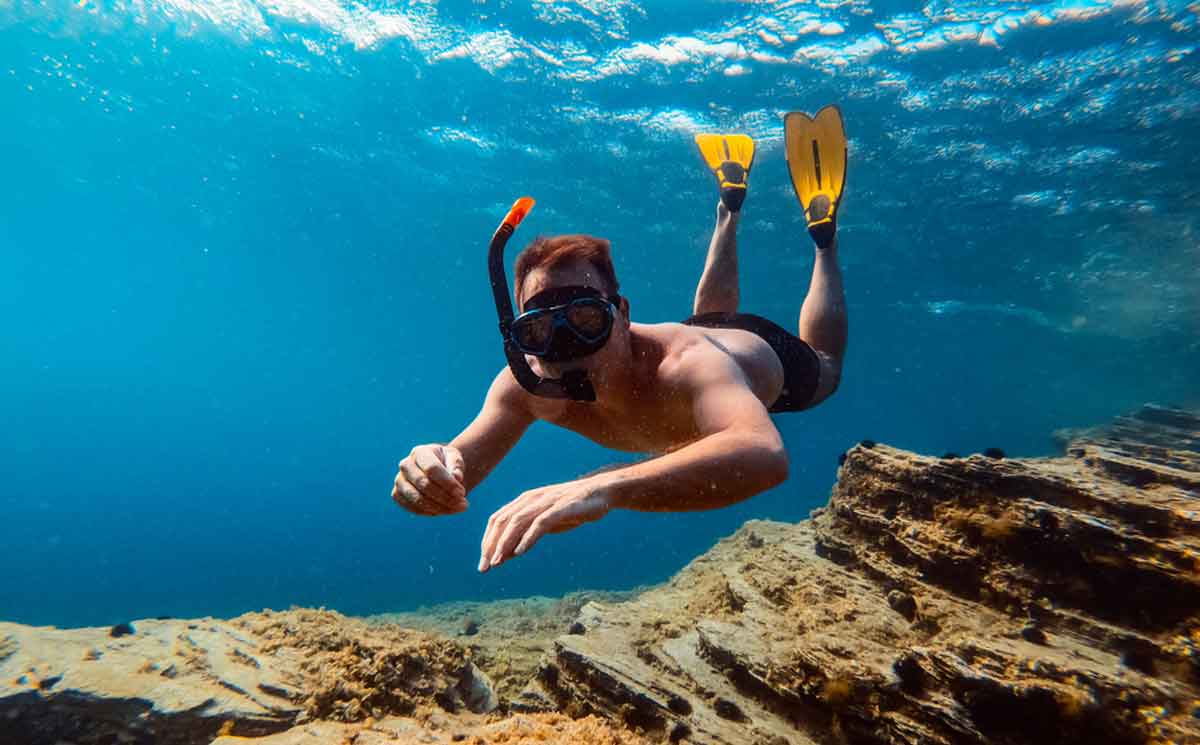 Snorkeling is one of the most popular activities to do while on holiday. Take a typical trip to a beach paradise and the dive shops and snorkeling tours line the beachfront streets.

Almost anyone will sell or rent you the gear you need.

Almost everyone is in a rush to seek adventure and observe the aquatic world, and that’s understandable. In tourist spots, it’s not particularly dangerous, but you can immeasurably improve your imprint on marine life and enhance your snorkeling experience by observing a list of things that are not advisable.

There’s a whole new world waiting for you to explore, from stunning underwater terrain to a visual feast of colors and fish.

As a recreational activity, it is certainly difficult to beat, so let’s get into a few areas that you may want to avoid becoming a victim of.

Unaware snorkeling – the temptation to dive into the crystal clear waters, mask up, and explore is almost irresistible. Even if there are people around there seems to be a ‘safety in numbers’ mentality. Both riptides and rip currents exist even if you don’t know about them. Huge bodies of water moving contrary to your expectations can be frightening if you’re unused to it. I’ve seen people carried off by these and rescued, but make sure you know what a rip current is, and where they are in the area you are snorkeling.

Don’t use cheap equipment – not to disparage those who choose budget gear, as there is some great budget gear. Snorkeling should be an amazing experience. A fogging, leaking mask with a snorkel that is awkward and fins that give you blisters will ruin potential memories. A leaking mask especially will stop you from experiencing the visual impact and will most likely annoy you. Make sure the gear fits well and works as it should before you go out.

Don’t snorkel alone – some sports activities are fine to do without anyone but snorkeling, especially if you are a beginner shouldn’t be done in isolation. Either have a group of friends or snorkel in a spot where other people are nearby. Lifeguards might be there too. This applies especially if you are a beginner, but more experienced snorkelers will snorkel with friends in case the unexpected occurs.

Don’t get sunburnt – there’s a good correlation between warm tropical destinations and the propensity to try snorkeling. Not unsurprisingly. As such it’s easy to forget that you are out in the sun. Additionally, the sun will reflect on the water surface and exaggerate the effect. Make sure you take a rash guard and environmentally friendly sun lotion that is ocean water compatible.

Don’t interfere with marine life – you should snorkel like an observer to the underwater world, not as an influencer. Marine life is a very precarious ecosystem a lot of the time, and interfering doesn’t help. Quite often some things are protected under law so it’s safer to presume that you should just observe,

Don’t snorkel uncomfortably – snorkeling has enough challenges sometimes without adding to them. Make sure the mask fits your face without causing undue discomfort, and also that the fins fit your feet correctly. Finning for a while with ill-fitting fins produces blisters that would make anyone proud. Leaking masks, with wincing pain isn’t likely to produce the experience you’re after.

Don’t cause fin damage – snorkeling in shallow water can come with some issues. A golden rule for snorkeling is not to interfere or touch anything. The issue comes when people move around with fins on. They are large and sometimes seem unmanageable. When you are snorkeling on the surface those fins can connect with the corals and break them. Being careless with your fins can do great damage, as can walking across the corals in snorkeling booties. Always be mindful of what’s happening with your fins.

Don’t be in a rush – the grass is greener syndrome can often make a beginner snorkeler start rushing about, which makes them miss the world that’s right beneath them. The trick is to slow down, breathe deeply and waft with slow kicks, not splash around like you’re in distress. Snorkeling with a slow purpose makes sure coral damage isn’t done and keeps you calm. Fish also won’t be scared and dart away if you make slow and deliberate movements. Patience is a virtue in exploring the world while snorkeling.

Don’t touch anything – this is perhaps the number one rule. DON’T go round trying to touch items in the sea. From wildlife to corals you should try and keep your hands to yourself. Apart from some marine life can be poisonous, you can disturb entire ecosystems. It’s a case of being aware of your surroundings.

Don’t touch coral – to emphasize the point above, you most important thing to keep in mind is not to touch coral. While it can look dead and inert it’s an ecosystem and touching a piece of coral can be fatal to the entire colony. Coral can be razor-sharp and cause bleeding and infections.

Don’t feed fish – this looks like a fun activity, especially as you share their environment, but it’s not something you should do. It disturbs the ecosystem of the area.

Don’t overexert – snorkeling is meant to be a fun, social, and entertaining activity. It’s not something you should treat as a competition. It’s advisable to not overly physically exert yourself as it keeps the energy in reserve should you get into trouble and prevents cramps and other unpleasantness.

Don’t snorkel without having eaten – snorkeling is physically exerting, and as such, it’s best done having been well fed. You need an energy reserve to push, move, and swim through water, which is harder to move through than air. Becoming weak while out in an ocean isn’t the best idea.

Don’t dehydrate – it’s similar for water, perhaps even more so. Snorkeling will make you sweat, especially in the hot sun but the water around you will make you unaware of the effect. Constant snorkeling will lead to dehydration left unchecked, and you won’t notice. Make frequent trips to the beach to replenish with water and make yourself adequately hydrated.

Don’t take alcohol – this probably goes without saying, but alcohol and any sport where you need to have your wits about you isn’t a great mix. A single beer is fine, but not a case of wine.

Don’t stray into murky water – this can be difficult with many in the water but swimming into murky water leads to many potential problems. Not being able to see where you’re going means you can swim into danger, and many of the world’s deadliest sea creatures use low visibility to hide. You can easily bump into something you shouldn’t which may lash out as it is surprised.

Don’t snorkel unsafely – this is a catch-all piece of advice that allows for some common sense. So don’t snorkel remotely while you’re alone, don’t snorkel in the dark, with injuries, or if you’re bleeding. None of that is a good idea,

Don’t let your hands wander – it’s normally best to keep your hands well away from small cubby holes in the rock, or rake around in the seabed. Some stinging barbs or animals don’t take too kindly to you doing that.