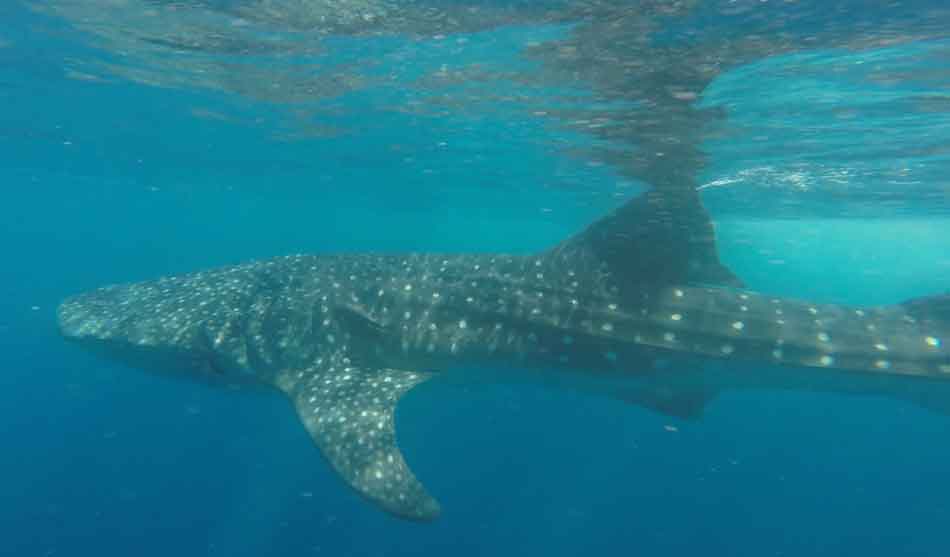 When I speak with fellow marine life enthusiasts – whether snorkelers or divers – about their bucket list of animals to see in the wild, perhaps the most common thing I hear is the whale shark.

There is a good reason for this.

Whale sharks are fairly rare to see and an amazing animal.

Recently, I had the opportunity to snorkel with whale sharks off the coast of the Yucatan Peninsula.

In fact, I had planned this specific trip to align with “whale shark season” in Mexico in hopes of seeing these majestic creatures.

What is it really like to snorkel with whale sharks?

Snorkeling with whale sharks was a very worthwhile experience; however, it was also one you truly have to make the most of. Due to regulations aimed at protecting the sharks, time in the water is fairly limited; however, it was enough to truly appreciate the wonder of these fish.

Let’s take a look at whale sharks and what it’s like to snorkel with them in Mexico.

This article will highlight a bit of information about these sharks as well as detail what to expect from the actual snorkeling experience.

What Is A Whale Shark?

While most people are probably familiar, some people may not know a lot about whale sharks.

While the name can be confusing, these are sharks; not whales.

In fact, a whale shark is the largest fish in the sea, with an adult being equivalent to a swimming bus at up to 30 feet.

Whale sharks typically live to be about seventy years old but can reach ages of up to 150.

They are a type of carpet shark, a term that refers to their carpet-like pattern of coloration.

In fact, whale sharks can be identified by their unique spot patterns, which serve somewhat like fingerprints.

Is It Dangerous to Snorkel With Whale Sharks?

Whale sharks are carnivores; however, people are definitely not on the menu. In fact, the diet for whale sharks consists of plankton and fish eggs.

They swim along with their mouths open, filtering up to 6,000 liters of water through their gills each hour, allowing them to dine on these tiny animals.

While you may have heard that whale sharks don’t have teeth, they actually do possess them.

However, they are incredibly tiny. Swimming with whale sharks is perfectly safe.

In fact, it is far more likely that you will accidentally harm the whale shark than it hurt you.

While they are large, their size is not an issue for you as they swim slowly.

Where Can I Find Whale Sharks?

Whale sharks can be found in all tropical waters around the world with the exception of the Mediterranean Sea.

However, these creatures are fairly rare to see, so it helps if you travel somewhere where they are more prominent in number.

Ningaloo Reef in Australia is a very popular place to encounter whale sharks.

Other popular locations include Donsol Bay in the Philippines, Chole Shamba in Tanzania, the Maldives, Utila in Honduras, and the Galapagos.

However, my travels took me to the Yucatan Peninsula of Mexico, a piece of land spanning from Cancun in the north to Tulum in the south.

Here, “whale shark season” falls from May to September.

The sharks migrate through the area, following their food source.

Can You Dive With Whale Sharks?

In Mexico, whale sharks are protected by law which prohibits you from scuba diving with them intentionally.

In other words, you can’t go find sharks and dive there.

However, if you are diving in a location and one swims by, that is fine.

Thus, scuba divers who see whale sharks tend to simply be in an area where they frequent and are very lucky.

In fact, feeding whale sharks sometimes become concerned when someone swims below them, leading them to dive deeper (and away from the meal they are enjoying).

How Much Does It Cost to Snorkel with Whale Sharks?

The cost for the whale shark trip was $165 plus tips (it is customary to tip your boat captain and guide if you enjoy the service).

While this may seem expensive, it is quite affordable when you consider what you get for the money.

This was a ten hour adventure with hotel pickup and drop off.

Additionally, the boat went quite a ways offshore.

The cost of the trip also included lunch with delicious conch ceviche and beer at a beautiful sandbar near Isla Mujeres.

Can I Touch A Whale Shark?

You should never touch a whale shark.

In fact, you should not touch or grab any marine life.

It is important to remember that you are a visitor in their world.

In fact, in many places, intentionally touching a whale shark will get you fined as they are protected.

Additionally, touching a whale shark can cause a lot of harm to the.

Whale sharks, like many marine animals, are covered in a mucus coat.

This provides a number of functions such as helping with breathing and protecting from parasites and bacteria.

Touching them removes this coat and risks causing harm to the fish.

While I can understand that it is tempting to want a connection with such a beautiful animal, the best practice is to swim and watch, taking in the awe-inspiring size and agility of these animals.

Snorkeling with whale sharks was certainly an amazing experience; however, it is probably different than what you imagine.

It involves a very long day on the ocean.

I was picked up in front of my hotel in Playa del Carmen, about an hour south of the Cancun harbor, before 5:00 a.m.

Upon reaching the harbor, we set out on the boat in search of whale sharks.

Whale sharks are rather easy to spot given their size; however, the ocean is vast, and it does take a while sometimes.

Boats do communicate with one another over radio, making the process quicker.

After about a two hour journey, we found ourselves 26 miles offshore in the middle of the Caribbean Sea.

There were about a dozen small boats in the area, each loaded with about ten people.

As we pulled up to the area, about 50 yards away, I saw my first fin.

In the Yucatan, you typically spend about two to three hours at the site with the sharks.

The goal is to encounter them without bothering them.

This means boats attempt to position themselves in front and to the side of the shark before dropping snorkelers.

In an effort to protect the sharks, numbers are limited.

Each boat may drop two snorkelers and a guide at a time.

You perch on the side of the boat as it slowly cruises around, waiting for the command to jump.

Ideally, you’ll have spotted “your shark” before jumping.

If not, look around once in the water to find it or simply follow your guide.

Once in the water, you want to anticipate the shark’s path and swim diagonally towards where it will be, almost like you are attempting to cut it off, although with the intention of only swimming alongside it.

While whale sharks swim very slowly, they can still easily outswim you!

By anticipating their path, you’ll get the best view and increase your time with them.

On my tour, each person was able to get three “jumps.”

That’s three opportunities to swim with a whale shark.

On one jump, I was lucky because the shark made a ninety degree turn to my side, allowing me to stay with it longer.

On another, as the first shark pulled away from me, another swam by, allowing me to swim with two sharks in one go.

Takeaways From A Real Experience

Being a good swimmer with your fins is also useful as the faster you can propel yourself, the longer you’ll be able to hang alongside the shark.

Additionally, ensure that you use sunscreen and choose one that is safe for marine life.

Otherwise, you’ll definitely get burned out on the water most of the day.

Many people expect snorkeling with whale sharks to mean you spent lots of time in the water.

However, in reality, I may have spent a total of 20 minutes in the water.

Understanding the experience and adjusting expectations is important.

Perhaps the biggest takeaway was the sheer size of the sharks.

When on the boat, they look big but not as big as you would expect.

Once you are beneath the water swimming alongside them, you truly feel tiny against their 20-plus foot bodies.

Finally, when snorkeling with whale sharks, keep your eyes out for other animals.

Manta rays are another frequent bucket list species for people.

They feed on the same things as whale sharks and can often be found in the same areas.

We saw three mantas swimming along with about fifteen whale sharks.

Snorkeling with whale sharks is a bucket list item for many people.

There are a number of places where you can nearly guarantee that you’ll see whale sharks including the Yucatan Peninsula between May and September.

Swimming with the gentle giants is a wonderful experience, but also a bit tiring after spending a day on the water.

However, getting a glimpse of these sharks up close truly helps show the importance of conservation of this species.

If you would like to snorkel with whale sharks, the Yucatan is a great place to go!

2 thoughts on “Snorkeling With Whale Sharks: What Is It Like? (Real Experience)”