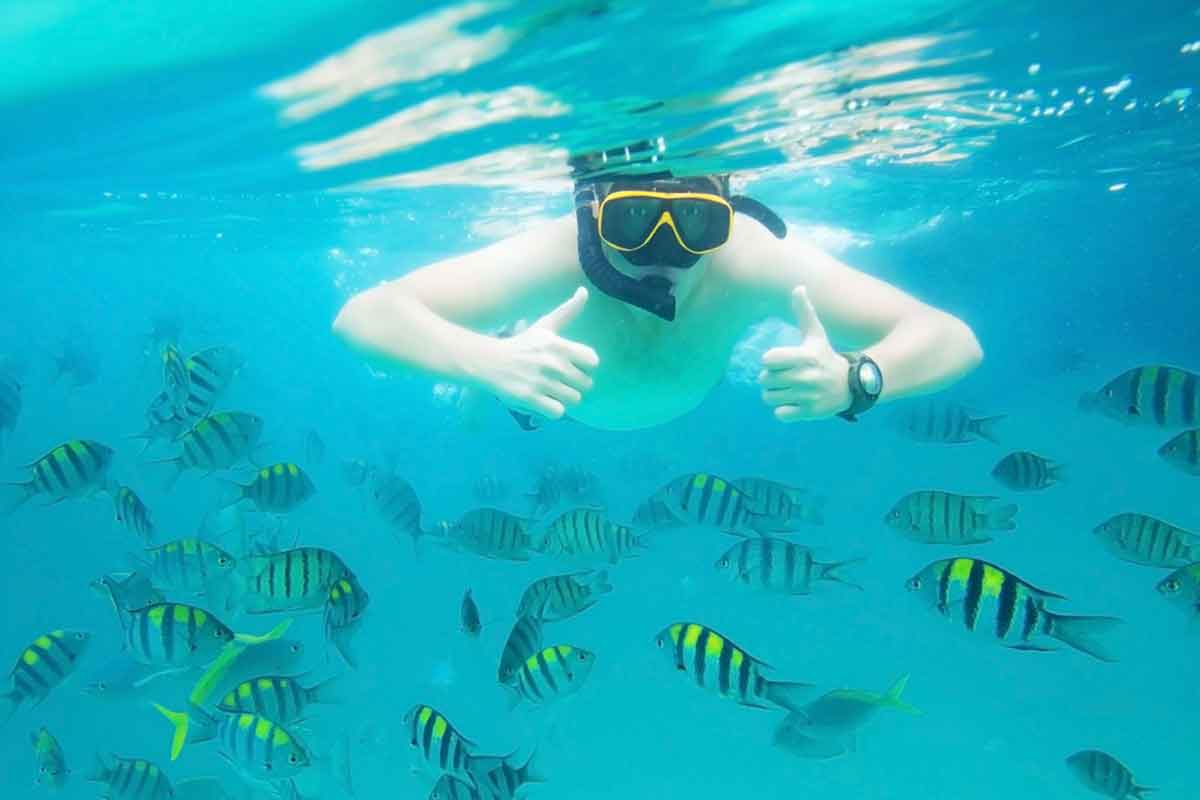 There are many places like that where one can get away to join in the aquatic life with some solitude. The advent of cheap travel has made many destinations accessible to a plethora of worldwide travelers.

The Great Barrier Reef sees some 5 million tourists every year.

While tourist snorkelers aren’t the only contributing factor to reef damage and ocean sustainability, it’s still a concern.

Worldwide there have been a few studies now, and the United States has a Coral Reef task force charting the effects of degradation.

We can all do our bit to preserve marine life and many of these are simple or inconsequential changes to how we go about our snorkeling.

You can minimize your impact on aquatic life by trying to lessen the damage your presence does, even if it’s just practicing swimming before you go. Anybody who needs practice can strengthen their muscles and get prepared so you remain agile enough in the water.

That said, we need a few practical tips to help out our aquatic friends.

A rash guard, in case you’re unaware, is a thin top that covers the torso and the arms. It’s extremely lightweight and made from breathable spandex.

It has a few advantages, but a central one is that they prevent harmful sun rays from burning the body. They act as a natural UV filter.

As such, you need to use much less sunscreen to prevent the body from burning in the intense heat.

While you can purchase more ocean friendly sunscreens, the fact is that you are introducing previously unknown elements to the ocean, and it’s better not to.

Protecting yourself and the environment coalesce when you wear a long-sleeved rashguard. If you wear some headgear as well, this is more effective than any sunscreen.

When visiting known snorkeling locations whether, via a boat tour or a vacation trip, some destinations will lane off parts into snorkeling zones.

You will see ropes and highly visible flotation devices on the water that a snorkeler is meant to remain within. They look like the zone separations at swimming pools.

These are normally for keeping a would-be snorkeler from going into a dangerous area. Many people who snorkel do so infrequently, and as such aren’t aware of rip currents, or riptides.

However, occasionally they will be to protect an area that has been previously damaged.

A snorkeler can help by obeying these zones so you don’t place yourself in danger, or damage the reefs that need protecting.

Rip currents and riptides are powerful flows of water caused by water returning against a flow or natural obstructions. They are usually narrow and long, but if you get caught in one, they will carry you away until the current dissipates.

For a beginner, they can be a source of panic, as fighting against the current is useless. You WILL be going where the water is going.

As such you will probably need rescuing.

These moments can cause a lot of panic, and anything from observers to friends trying to catch attention for their mates stuck in one, tend to cause damage to reefs as they resolve the more pressing matter.

Asking a lifeguard, or a tour guide about known rip currents and riptides and areas to avoid will help prevent this situation from occurring.

Use The Correct Sunscreen

In the last few years, both studies and government action have started to recognize the effect of chemical sunscreens.

A snorkeler will rub themselves with beach sunscreen and dive into the water. Chemical sunscreens then leech off the skin and deposit the chemicals into the ocean,

Chemical sunscreens contain harmful organic compounds that can cause massive environmental damage. Not solely, but the millions of tourists visiting the same area can deposit thousands of tons into aquatic habitats.

Organic compounds can deform the young of fish, upset reproductive genetics, and strip the symbiotic nature of living coral, effectively killing it.

Many places, including Hawaii, have banned the use of chemical sunscreens for this reason.

The solution is to look for a mineral-based sunscreen.

If you lower the area of your body needed to put sunscreen lotion on with a rashguard, you can apply a mineral based sunscreen using Zinc oxide or Titanium dioxide. It also needs to be labeled non-nano and water resistant so it doesn’t wash off, yet be a minimum of SPF30 to be effective.

Unfortunately, unawareness of the issue causes many snorkelers to unintentionally cause damage far beyond what is perceived.

Snorkelers and ocean dwellers seem quite happy to snap off a bit of coral, or can’t resist touching them as they dive underwater,

Corals are living ecosystems that exist in symbiosis with a mucous layer, which if removed can be fatal to the coral colony. Zooxanthellae, an algae nourishes the coral, and if removed causes coral bleaching.

A golden rule of aquatic watersports like snorkeling or scuba diving is not to touch anything. You never know what damage you are about to bestow.

As a rule, you can further break down this rule;

Don’t Reach Out To Wildlife

While it’s tempting to reach out and touch the turtles and fish, you can cause harm without realizing it. Fish have a mucous layer on their body that protects them from disease, and you can stress an animal as you reach out, which it perceives differently.

Many things in the ocean have spines or bite if they momentarily feel threatened, and some are venomous.

It’s just simpler and easier if you snorkel to observe rather than interfere.

You Should Not Chase Wildlife

A snorkeler, or any person in the marine environment, should have the objective of doing as little damage as possible. While in the water you should observe without giving a threatening presence.

While in the water, if you move with slow and deliberate motion this is the rhythm of the sea. Splashing, and darting fast movement is a symbol of distress, and attracts unwanted interest.

The sea is a temporary environment for you, so posing as non-threatening is advisable.

If an animal chooses to come towards you remain in slow motion and try not to reach out, and especially don’t chase them. This can cause them stress as you could be seen as a predator.

Do Not Feed Aquatic Wildlife

This isn’t just a case of singular feeding, but thousands upon thousands of ocean visitors putting food in the water can alter the food chain quite badly.

Apart from introducing new food to the food chain that millions of years have built up, you can deprive animals of vital survival skills. Marine animals that become expectant of food will stop hunting, and search out humans as a source for their sustenance.

Aquatic ecosystems can be quite fragile so it’s best not to interfere.

Don’t Stand On Coral For Selfies

Coral isn’t just in deep water. Many a coral reef is amongst the shallows within easy access for beach dwellers.

While that’s great for convenience, over time, both accidental and unaware damage can be done not only as fins collide with a coral reef, but people can stand on them.

Selfies over coral reefs and careless snorkeling can cause the death of coral colonies.

As alluded to earlier, corals work in symbiosis with a mucous layer, which if disturbed by touching it, can kill off the colony.

Maya beach in Thailand was closed for months so that the reef system could be left alone from all the damage that was done to it by careless visitors.

Working together, not only to set an example but practicing reef friendly snorkeling, we can take responsibility for keeping the marine systems that we are visiting safe from destruction.

Nobody wants to stop tourism, but doing something as simple as making sure your boat tour uses mooring boys and not dropping anchors into the reefs can help sustain the environment you’re hoping to snorkel.

Picking a responsible tour operator can change things. In Thailand, tours to ride elephants were ended because tourists demanded ethical treatment of the animals.

Damage to the coral reef systems is systemic but can but done in a variety of different ways. It can be unintentional and accidental, to deliberate but naive.

When moving around corals, and snorkeler should keep a distance suitable for observing without interfering, and don’t interfere with the wildlife, lest you cause stress.

The reefs and corals of the world deserve our best preservation efforts.

One thought on “6 Snorkeling Tips For Not Damaging The Environment”