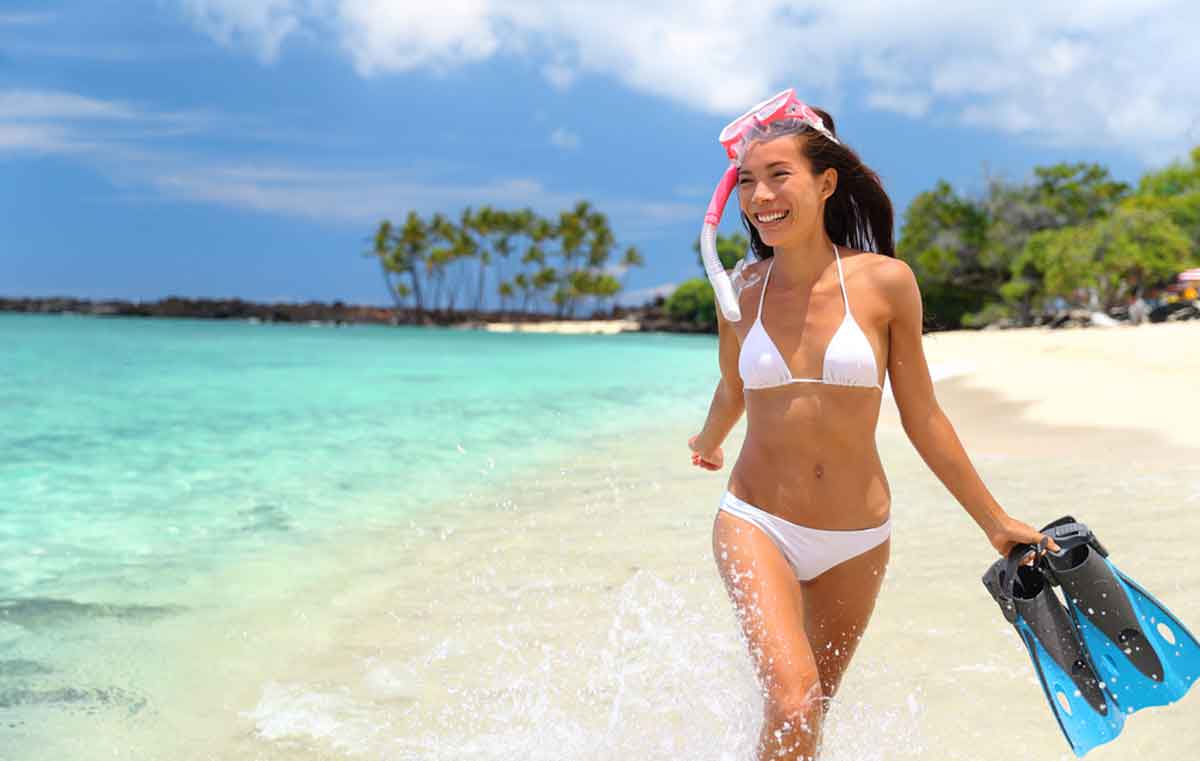 While most can envisage the fact that snorkeling is good fun, something more mundane maybe is that the activity can also be quite physical.

Depending upon how far any individual wants to push it, snorkeling can be quite tiring if unused to the extent of the excursion.

Snorkeling has the potential to bring great mental and physical benefits to many people, so how is snorkeling good for you?

Snorkeling is physical and you will burn around 250 calories per hour. It is cardiovascular and helps build muscle tone and strength in all major muscle groups. Learning breath control improves heart and lung function, and the experience is associated with being mentally rejuvenating.

There are many benefits to snorkeling, an activity that is accessible by many, from young to old, so there’s no reason anyone can’t try it out.

Let’s run through some of the health benefits.

As you might imagine, snorkeling is largely done outside and is physical in nature. Literally.

There are quite a few benefits to this, some will be apparent, but some may not be.

Vitamin D can be obtained from food, but a large amount of it is synthesized by the body when in sunlight.

As snorkeling is largely done in tropical, or at least sunny conditions, someone participating in the activity gets a large dose of it.

One of the primary benefits of Vitamin D is the fact that it fights disease, and boosts an immune system. It’s a key component in helping your body fight off infections.

Low levels of Vitamin D have been diagnosed in patients suffering from recurrent depressions, thus Vitamin D has been linked to helping fight depression and anxiety.

Most sports or activities work a specific set of muscle groups, even though they will help you get healthy. Snorkeling, pretty much like swimming, achieves an all round fitness by using all the major muscle groups in the body.

Because of the nature of snorkeling being a workout of all the major muscle groups, often it gets missed that it’s a great workout for the minor ones. Minor muscle groups play a role in keeping other muscles in place which help in preventing injury.

Unlike running, the natural environment of the water is considered a low impact on the joints. This will ease joint pain and mobility stiffness.

Swimming is considered a great activity for those with arthritis,

For those looking for a physical activity that won’t be difficult on the knees or hips, snorkeling is a great choice.

Whether you use fins or not, snorkeling uses all the muscle groups which will push against the natural resistance of water.

Water is denser than air, so moving an arm through it, or a leg will require a little more strength than through the air. This extra resistance increases muscle strength, and also tones the muscles.

As every muscle group is used, it uses the muscles all over the body.

The use of fins while snorkeling will particularly tone the legs. The blades resist the water and require an effort to push the body through the water. Diving has a similar effect.

Someone engaged in snorkeling regularly will also experience increased cardiovascular fitness. Your heart gets a workout as well as your muscle groups.

Maneuvering, swimming, using fins, and diving all require effort against the natural resistance of the water, so the heart will pump harder to get the required oxygen around the body.

Snorkeling is good for reducing the risks of heart disease and lowering cholesterol levels. It will also help in reducing blood pressure.

As well as developing the heart muscle, a key component in all round fitness, snorkeling also works on the lungs and the diaphragm as you strengthen breathing.

Maintaining slow and steady breathing, when intaking air through a tube requires technique, and stronger lungs will be developed.

Snorkeling is not the same as breathing in the atmosphere, as you must remain calm as your face is placed in the water with slightly more restricted breathing.

Deep breathing techniques will help you with snorkeling and build up lung capacity. Snorkeling has an aerobic component, so the body will get used to taking in more oxygen with each breath,

Snorkeling also involves diving, so a diver must hold their breath to swim beneath the surface. This further assists in increasing lung capacity and aerobic fitness.

Snorkeling is a gentle exercise if you want it to be, and as such the natural oils the body produces when exercising will oil the joints, and loosen the muscles preparing for more vigorous activity.

Snorkeling will strengthen a variety of minor muscles as part of its complete body workout.

Much like swimming it’s recommended by physiotherapists for those recovering from injury for this reason.

Snorkeling isn’t just swimming. While they share many of the same reasons for enjoying the sport, there are additional components.

There are a natural strengthening and toning of muscles that happen to snorkelers because of the resistance of water. Water is denser than air, and moving limbs through it requires more force.

The breaststroke is normally learned by most people first, and front crawl later. The fin kick used by snorkelers has more in common with the front crawlers.

There isn’t any particular stroke used in snorkeling but it’s probably more of the similar muscles used in both these swimming styles than anything (breaststroke and front crawl).

As such a snorkeler will likely use these main muscle groups

Hamstrings and quadriceps – The full group of muscles in the upper thigh work in tandem while snorkeling. Whether you are using fins or not you will use your legs to kick to propel you forward.

The fin blades are designed to move you through the water faster, but they do this by providing increased resistance to the water. Using fins against the water resistance makes a snorkeler move forward faster.

As such the quads and hamstrings get a good workout.

Forearm flexor/extensor muscles – These are the muscles in your forearm, that are used to propel a snorkeler forward, much as they do in any sport involving swimming.

Any swimming stroke uses these muscles, but additionally, a snorkeler uses them to maneuver in the water. Not only are they used in turning around on the surface, but can be used for changing direction, a common occurrence in snorkeling.

Biceps, triceps, and deltoids – While biceps and triceps get a light workout normally, the deltoid is a large shoulder muscle extensively used in propelling any snorkeler forward.

Back muscles – The lateral muscles get an extensive workout during the natural twists and turns of snorkeling.

Trapezius muscles – The act of turning the head, and twisting the arms during the resistance to water will tone and strengthen this muscle.

Spinal cord support muscles – With the modern sedentary lifestyle of working in offices, we can don’t get enough exercise that strengthens the back. Quite the reverse.

Snorkeling strengthens the key muscles that keep the lumbar and spinal regions supported.

Gluteus maximus – This hip muscle (buttocks) gets an extensive workout during the fin kicking associated with snorkeling.

Almost any leg movement against the water will firm up and strengthen this muscle.

Neck muscles – All the muscles in the neck will get strengthened naturally with movement in the water.

Pectoral muscles – The continual extension and contraction of an arm, not only to maneuver but to propel yourself in water will exercise the pectoral muscles. This will strengthen the chest but not massively so.

Calf muscles – The fins are not only used for propulsion but small finessing to the direction. The ankles are continually being used so the calf muscles will tighten and strengthen with extensive snorkeling.

Diaphragm – With controlled and extensive breathing, snorkeling will increase respiratory fitness and this muscle is key.

Overall, like swimming, snorkeling is very low impact but water resistance naturally tones and strengthens all muscles used against the water.

How Many Calories Does Snorkeling Burn

Never been sure how anyone knows this, but most ‘experts’ seem to reckon a snorkeler will burn between 250 to 300 calories in an hour.

This can vary quite a bit, as light surface snorkeling with minimal effort is very different from someone who submerges and swims underwater for a great deal of time.

There is some leeway there.

By way of comparison;

So snorkeling doesn’t burn a lot more calories than other activities, but like swimming, it will use every muscle group at the same time.

When talking about health benefits, it’s not just physical that matters. Mental health is just as important, if not more so.

Light physical exercise is still capable of producing natural endorphins that help with many mental issues, like stress relief and anxiety.

Many people have associated the controlled breathing techniques similar to those experienced by yoga practitioners.

The natural silence and beauty of the underwater world give a very tranquil experience that almost everyone finds peaceful, and works like meditation.

Someone who snorkels regularly may well find themselves naturally more peaceful and at ease with the world.

Specifically, though, snorkeling takes on mental health benefits in a few main areas.

Rejuvenation – Snorkeling is one of the finest rejuvenating recreational activities you can do. Largely done in crystal clear water in tropical environments, a snorkeler will experience the beauty of nature in a cleansing environment.

Stress relieving – Modern life can be more stressful than you think. Day to day activities can leave little time for managing the anxiety that can build up.

Snorkeling allows someone to connect with nature and gently exercise, and is great at relieving stress. In the quiet of the underwater world, there’s a beauty and serenity that is difficult to compare to anything else.

Coupled with the breathing practices that resemble yoga calming exercises, snorkeling is extremely relaxing on the mind and body.

Endorphins from exercise – Endorphins are nature’s natural feel good drugs that get released into your system during exercise. They produce the ‘runner’s high’ phenomenon.

They help produce a positive feeling similar to morphine, which has the effect of making the whole body relax and gives a sense of well being.

Overcoming phobia – Unsurprising called aquaphobia, the fear of water has a grade of tolerance in any individual. Many people are unafraid of water but don’t like the thought of swimming way out at sea.

Some don’t like it so can’t swim very well, and that produces a fear in the water where it’s deeper than they are tall.

Snorkeling is a good way to overcome the phobia. Snorkeling can be done in vests that remain afloat, but also many snorkeling areas are relatively shallow.

Snorkeling near a beach, or over a shallow coral reef provides plenty of ways to focus the mind on the activity, rather than on the fear.

Considered a relaxing entertainment, snorkeling is a great activity to introduce someone to water as well as ease and unease they have about being in the water.

Whether you consider snorkeling a sport, an activity, exercise or just a recreational hobby, the practice has a great many health benefits.

Snorkeling is a great activity that is enjoyed by pretty much everyone who tries it. It’s soothing, relaxing, and practiced in some truly amazing locations.

Along with all the fun though, is that it has some enormous health benefits. While encountering all manner of marine life, fish, and swimming with turtles your body is getting an all over workout.

Snorkeling, in simple terms, has much to recommend it, and anyone partaking in the activity can expect to get fitter.