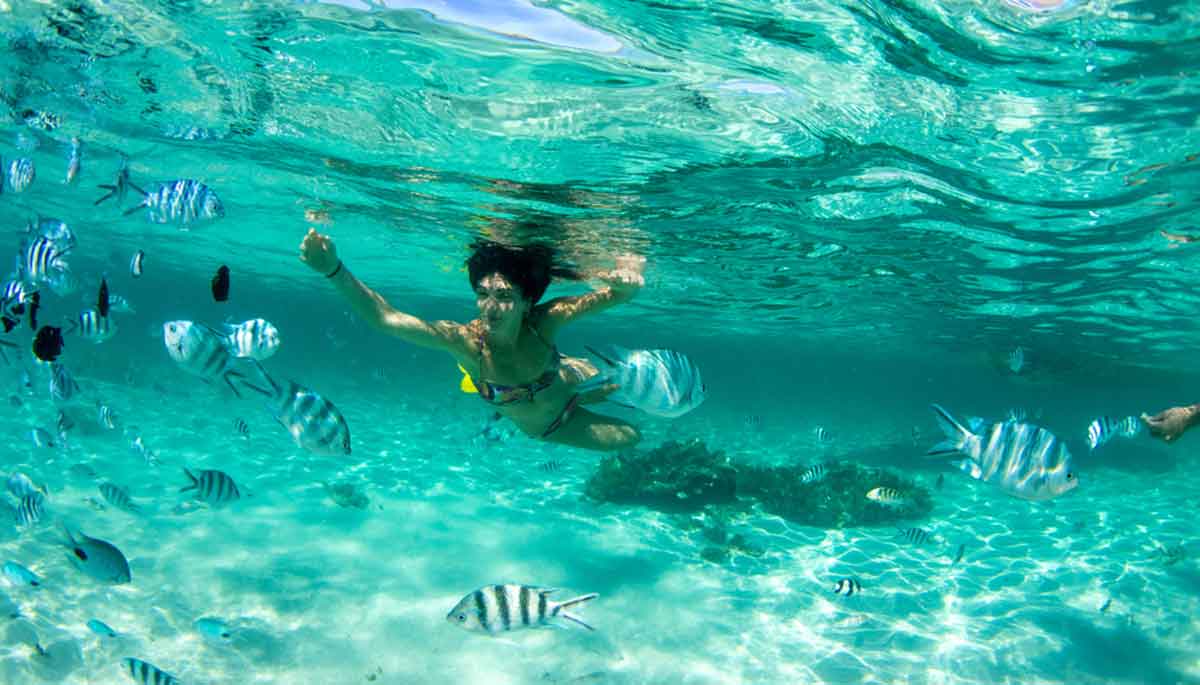 If you imagine yourself in a stunningly beautiful tropical or Caribbean location, and happily snorkeling in the crystal clear water, then you aren’t alone.

It’s an activity that is both opportunistic, and plannable in nature, and attracts thousands to the water every year.

Snorkeling in its modern guise is done with technical equipment developed over years of experience, but early on it was enjoyed with reeds cut to length.

It’s largely recreational but snorkeling has many positive health benefits from muscle strength and stress relief to increased cardiovascular fitness.

There aren’t many sports that connect you to nature in the way snorkeling does. In the peace of an underwater environment, you can enjoy the natural corals and watch fish swim around their world.

There are some of the most amazing sights to see for anyone who wants to take up the activity.

To accompany the fun, there are some fun facts for those who wish to know. Here they are for your amusement, listed below;

It started with reeds – Whether it was curiosity, exploration, or more effective hunting there is evidence that snorkeling dates back many millennia BC.

Apparently the farmers in the Mediterranean around 3000 years BC have left evidence that they collected sea sponges. Although a study has confirmed that sea sponges were collected going back much further, to 5000 BC.

So no-one can quite pinpoint when it might have started.

Leonardo do Vinci invented the prototype snorkel – While the diving bell was used for going underwater to collect food and hunt for longer periods than can be sustained by breathing, there was a need for increased mobility.

Leonardo da Vinci is credited with inventing many pieces of diving apparatus, but in particular, the snorkel. He built a hollow tube, much like the modern snorkel to attach to a dive helmet, allowing breathing anywhere, and not attached to a tube anchored elsewhere.

He used to skin dive off California, or the Mediterranean from th 1920s to the early 1930s, and in 1938 published a book entitled ‘The Compleat Goggler’, which apparently piqued the curiosity of legendary naval explorer, Jacques Cousteau.

In the book, he proposed what is now recognizable by modern snorkelers.

The term snorkeling comes from a submarine – In the book ‘The Compleat Goggler’ by Guy Gilpatric he gave name to the equipment he used.

While the masks were called goggles, the breathing tube was called ‘the snorkel’. This was a reference to the snorkel from submarines that use it for a similar purpose, namely breathing while submerged.

Early submarines used it to get fresh air into the submarine without surfacing.

It’s mainly aerobic – An aerobic exercise is defined as low intensity activity that can be sustained.

Many snorkelers enjoy this aspect of the activity, and will quite happily travel across the surface to enjoy the seabed and the wildlife.

It becomes an anaerobic activity when there are intense bursts of activity over a shorter duration.

You can snorkel when it rains – Contrary to opinion it is entirely possible to snorkel in the rain. Many breathing tubes come with splash guards on them that angle and channel the water away from the tube.

While it doesn’t eliminate the problem of water entering the tube it does maintain an airway. A purge valve on the bend will allow exhalation to ‘blow’ the water back out into the sea.

You can fly after snorkeling – While snorkeling can often be similar to snorkeling there are quite a few key differences.

The bends are a condition that scuba divers get from breathing in compressed air and ascending too rapidly. It can be painful, and in severe cases fatal as nitrogen bubbles form in the blood and tissues.

This limits the time scuba divers can fly. Health guidelines are typically 24 hours after scuba diving.

There is no limit for snorkelers, and they can fly directly after snorkeling.

Only mask and a snorkel needed – Contrary to perhaps popular opinion, a set of fins isn’t needed. They are advisable but there’s no condition that says you have to be using fins to snorkel.

Although many snorkeling pictures display them, you only need a mask and snorkel to actually be snorkeling.

A human body averages 6 liters per breath and the snorkel volume is a lot lower and isn’t compressed air.

When you see a snorkeler underwater they are by default, holding their breath.

Snorkeling in the USA (snorkelling in the UK) – Snorkeling has two spellings. It is pronounced the same, but the USA uses the single ‘l’ spelling.

The UK uses the ‘double l’, which turns snorkeling into snorkelling.

Underwater as long as you hold breathe – Snorkelers have no specific underwater breathing equipment. The snorkel does not provide any assistance when you’re underwater.

Repeated diving and excursions will increase a snorkeler’s respiratory fitness but they will be underwater as long as they can hold their breath.

Increased fitness and higher lung capacity will help you stay underwater and explore for longer.

Wide age disparity – Many sports have very defined aged groups that will typically enjoy it by participating in it. Football, hockey, baseball, and basketball are all age dependent to a certain extent.

As with cycling, and hiking, snorkeling has a wide range of people who can enjoy the sport. As long as you are fit and active there aren’t too many issues.

Toddlers as young as 3 can snorkel, as can octogenarians.

No training needed – Snorkeling is easy to learn. If you are confident in the water there shouldn’t be any issues at all.

Learning the dangers of rip tides is another thing altogether, but the physical practice of snorkeling has a very low barrier to entry.

While training will help you learn correctly from the start, many people never bother and go with the ‘trial and error’ method.

Having basic swimming skills is definitely recommended though.

A scuba diver will often have a snorkel for additional breathing in shallow water, but a snorkeler doesn’t use any additional air sources.

A few companies have experimented with small hand pumped compressed air technologies but it isn’t common.

Don’t have to dive – Despite the number of pictures of snorkelers gliding beneath the waves, it isn’t actually necessary for snorkeling.

A beginner specifically can be happy snorkeling and gliding across the water’s surface.

Floatation devices can be used – For those who aren’t as confident in the water, a few options are available. Most use a snorkeling vest.

It’s designed to be unobtrusive and works much like a life jacket. It’s not ideal but does give many people some added confidence.

Breathe control is necessary but a snorkeler will see improved levels of fitness with repeated exercise.

Easy to learn – Snorkeling is actually very easy to learn. Presuming you can swim so you can enjoy all the benefits, most of the knowledge is for a personal benefit point of view.

Many beginner snorkelers actually just start and figure it out as they go. They can deal with what they find on the ground, and work out their preferences from there.

There’s nothing about snorkeling that’s tricky, considering the huge benefits from the activity.

It’s very relaxing – It’s one of the most relaxing sports that you can imagine. The beautiful landscapes, tropical weather, and the natural serenity of the underwater world have a very calming effect.

It’s low impact – Much like swimming, snorkeling is very low impact. Those suffering from joint pains and issues will find snorkeling much easier than all other sports.

It’s leisurely and you can pace yourself at a speed that works for you.

From the neck to the calf muscles all movement in water faces a natural resistance. Water is denser than air so either moving through or maneuvering through it will be tougher. You will do so, but the muscles will naturally develop to combat the increased resistance.

Even minor muscles get a workout. Snorkeling is one of the few activities that benefit the whole body in a low impact way.

It’s been around thousands of years – Snorkeling isn’t entirely modern. What may have started out as more fundamental in nature is now a recreational activity.

Crete appears to be the location we can trace it back to. They have found evidence of primitive reed snorkels back to around 3000BC which makes snorkeling a human activity that has spanned 5 millennia.

Natural beauty essential – Unlike other activities, snorkeling can, and indeed is, practiced throughout the world. Snorkelers prefer a combination of natural landscapes, warm water, great weather, low tides, and an active marine environment.

According to CNN, the list of the best snorkeling spots in 2019 was;

A varied and beautiful set of amazing locations I’m sure you’d agree.

Breath deep and slow – Breath control is essential to a snorkeler. On the surface, they will be using a tube, and underwater a diver will be holding their breath.

You can snorkel and see whale sharks – There aren’t many sports that connect you with nature the way snorkeling does. Some of the most amazing and genuinely life changing moments can be had if someone can snorkel.

Blue whales are on everyone’s bucket list, along with killer whales, but many people want to see whale sharks.

Snorkeling allows you to experience the thrill of seeing one of these majestic creatures in its natural habitat.

They can be seen in a variety of global locations, including;

Another round of the world’s most beautiful places.

Freestyle practice helps learn – Of all the swimming strokes available to someone wanting to learn snorkeling, perhaps freestyle helps the most.

Most people learn to swim by using the breaststroke, but those who progress to freestyle may have an advantage.

The reason is that the leg kick more closely resembles that used for snorkelers with fins.

One thought on “26 Fun Snorkeling Facts”