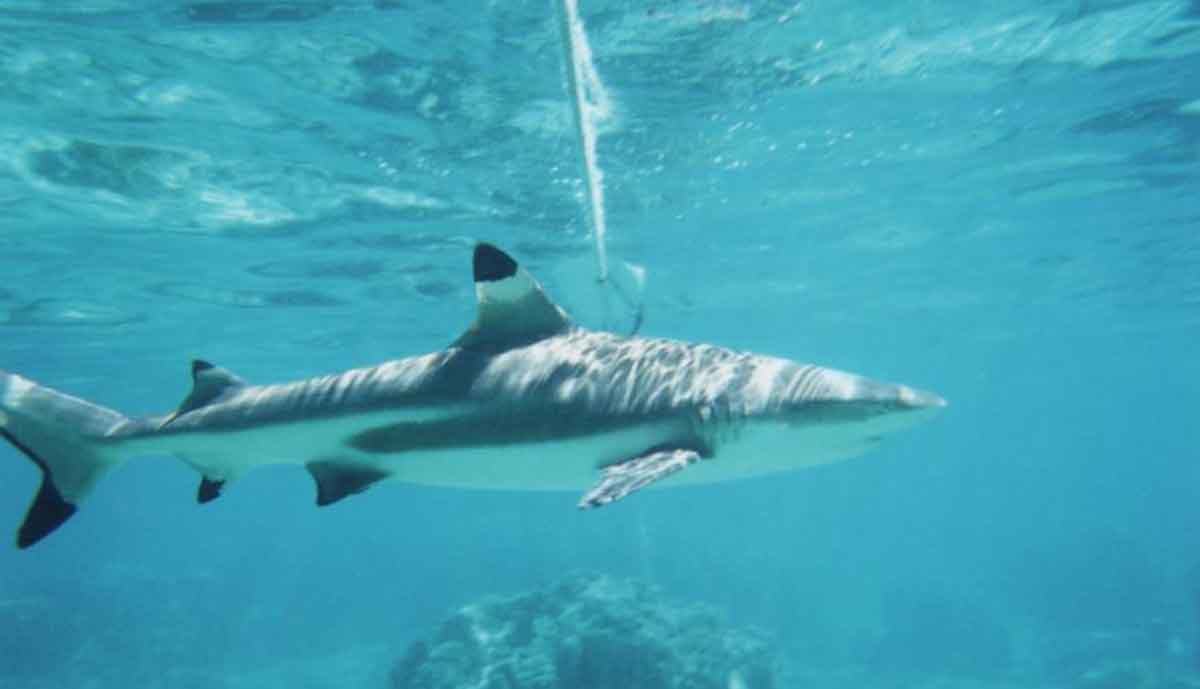 There’s no greater source of unease for watersports enthusiasts than sharks. Whether occasional or recreational, being in the open water can cause many to start speculating.

While the risks may underplay the reality, the vast expanse of the oceans concentrates the mind when snorkeling or diving.

If you are snorkeling in the Great Barrier reef, that vast ocean brings fear as everyone imagines an attack from everyone’s number one sea predator, the shark.

In a nutshell though, what are the dangers with sharks if you snorkel the Great Barrier Reef?

The fear of shark attacks, whether unprovoked or fatal is vastly exaggerated in the Great Barrier Reef. In any given year between 1 and 3 attacks occur that are fatal with five million tourists each year. Some years have zero fatalities. The common sharks on the reef are the white tip and black tip sharks which are not maneaters.

Many involved in the sport of snorkeling actually want to see a shark, as for many it’s a very memorable life moment. Others fear them, so what’s the truth

Let’s start with put this into a global perspective first. According to the Florida Museum, there is a global average of 82 incidents involving sharks annually.

Of those 82 incidents, there is a global average of 4 fatalities a year.

The Great Barrier Reef has five million tourists every year so the numbers are helpful is assessing the real risk of a shark attack.

There’s no doubt that it is concentrated in a few ‘hotspots’ and the Great Barrier Reef is considered to be one of the target areas.

So how many fatalities have we seen in recent years?

In mission beach, Steve Foster was presumed dead from a shark attack when he was scuba diving a shipwreck.

In 2017 no-one died at all. A diver was mauled by a bull shark but survived, and in the Whitsundays, some tourists were suspected to have been mauled by a Tiger shark, but survived.

Daniel Christidis was suspected of being killed by a shark in Cid harbour. There had been a few attacks before the attack but non were killed until Daniel.

Again, in this year no-one died at all.

This year was a bit of a stand out year with three deaths. Zachary Robba was killed performing his dream job on the reef, Matthew Tratt was killed off Fraser island, and Nick slater was killed off Greenmount Beach, Coolangatta.

So despite the fear they still remain an incredibly rare event.

Here’s the tally of fatalities by year on the Great Barrier Reef to shark attacks.

You can see why the year 2020 caused some attention. Statistically speaking, the data tripled.

Should You Be Worried About Sharks At The Great Barrier Reef

So given that the worldwide fatality rate for shark attacks is really low, and at the exact spot of the Great Barrier reef only seems to produce 0 to 3 deaths on any every given year.

A combination of awareness, professional standards for lifeguarding, and advanced medical treatment has kept the rate of deaths in the Great Barrier reef a great deal below what the statistics might have been.

With 5 million tourists on the reef every year the fact is that you would be extremely unlikely to ever see a shark, let alone be attacked by one.

So let’s run through sharks that you could possibly encounter. Don’t confuse that with likely.

Firstly, not all sharks are maneaters. That’s something that gets missed. Many sharks aren’t that aggressive either.

So let’s walk through the sharks. I will start with the 3 most deadly and feared (Great White, Tiger, Bull), and then go onto the ones that aren’t dangerous at all.

This is the big one. Quite literally. Ever since Jaws made this fish famous, anyone in the water has that small fear inside them.

The Great White shark is the world’s biggest predatory fish. A revolving gumline with teeth that fall out, it has 300 teeth which makes it a fearsome predator. Famously aggressive when hungry there are videos everywhere of encounters with this fish.

Its main diet is fish, seals, and dolphins. They are also known to scavenge whales.

Attacks on humans while rare, always make the news. It’s generally accepted that a human attack is the shark mistaking us for a seal or other marine mammals. Not a great consolation, but it does mean that several people have survived an ‘attack’ as the shark lost interest when it realized its mistake.

They’re responsible for approximately one-third of human attacks every year on a worldwide basis. Most are not fatal.

While identifying the species of shark that kill divers, or surfers isn’t that easy, the deaths directly attributable to the Great White are still few and far between.

In 1992, Michael Docherty, a 28-year-old was a surfer killed while surfing in Moreton Island, Queensland.

In 2020, Zachary Robba was suspected of having been killed by a White shark, and a 59-year-old was admitted to hospital in Townsville after a suspected Great white attack. He survived though.

Matthew Tratt was killed by a suspected Great White, as was Nick Slater.

So in 2020, 2 people are known to have died where the shark was suspected to have been a Great White.

How many go unreported is unknown but Great White attacks are like plane crashes. Everyone hears about it.

Tiger sharks are often referred to as the ‘dustbins of the sea’ as they consume almost anything. Nothing is really safe, from fish, sea turtles to rays. They even consume metals, plastic, and wood.

They are aggressive though, being named because of the body stripes. They are the second most frequent attacker of humans, after Great Whites, but the Great Whites will frequently lose interest when they realize they are not seals.

Tigers are more aggressive, and more likely to come back again.

However, the good news is that they prefer deep waters, so a snorkeler or scuba diver is unlikely to encounter one.

In 2019, Danny Maggs was having a splash around with a friend when he was bitten by a suspected Tiger Shark. Danny survived but had his foot amputated.

The Bull shark is another that is known to be aggressive which is actually a scavenger and an opportunistic feeder. They do encounter humans, and attacks by these fish do occur.

The Great Barrier Reef doesn’t have many attacks by Bull sharks.

Kerry daniels was swimming off the coast of Queensland in early 2017 when he was attacked by Bull sharks. Luckily he managed to fight it off with a spear.

In 2020, Rick Bettua was known to have got into a tangle with Bull sharks.

Not every shark has razor-sharp teeth and a propensity for humans. Some sharks are harmless to humans, and you may see one if you are very lucky.

The harmless sharks you may encounter are;

The Pacific Ocean is a large body of water, so although it contains Great Whites, Hammerheads, and Tiger sharks, it’s very unlikely that they will come to the Great Barrier Reef.

The film Jaws has a lot to answer for. It made a shark attack go from something statistically unlikely to seemingly almost inevitable.

It’s a great film, but it gives a distorted impression.

While the media loves a shark attack story, or a sighting, as it tends to grab headlines, as they are rare but stoke fear.

While shark attacks anywhere in Australia, not just the Grear Barrier Reef, most attacks aren’t fatal even when they do occur. They are rare in any year.

What should be noted is that there is obviously a correlation between attacks on the Great Barrier Reef and other areas because it’s an area that humans are attracted to be. More humans in the water, naturally mean more shark attacks.

Five million tourists arrive each year, plus all the locals may make it seem that sharks inhabit the area, but you see more attacks there because humans are more frequently in the water.

Everyone who has been attacked by a shark has been extremely unlucky. They are rare on the reef, certainly the maneater sharks.

Remember, only about 4 to 10 people die each year from shark attacks around the globe.

There are surfers, snorkelers, and divers who have spent their entire lives amongst the Great Barrier Reef and never seen a shark.

When they do occur, the media pounce and make it sound like a comment occurrence. The truth is, they aren’t, they are extremely rare.

So if you are thinking about visiting the reef, please don’t be put off by the threat of sharks. The numbers just don’t support reputation.