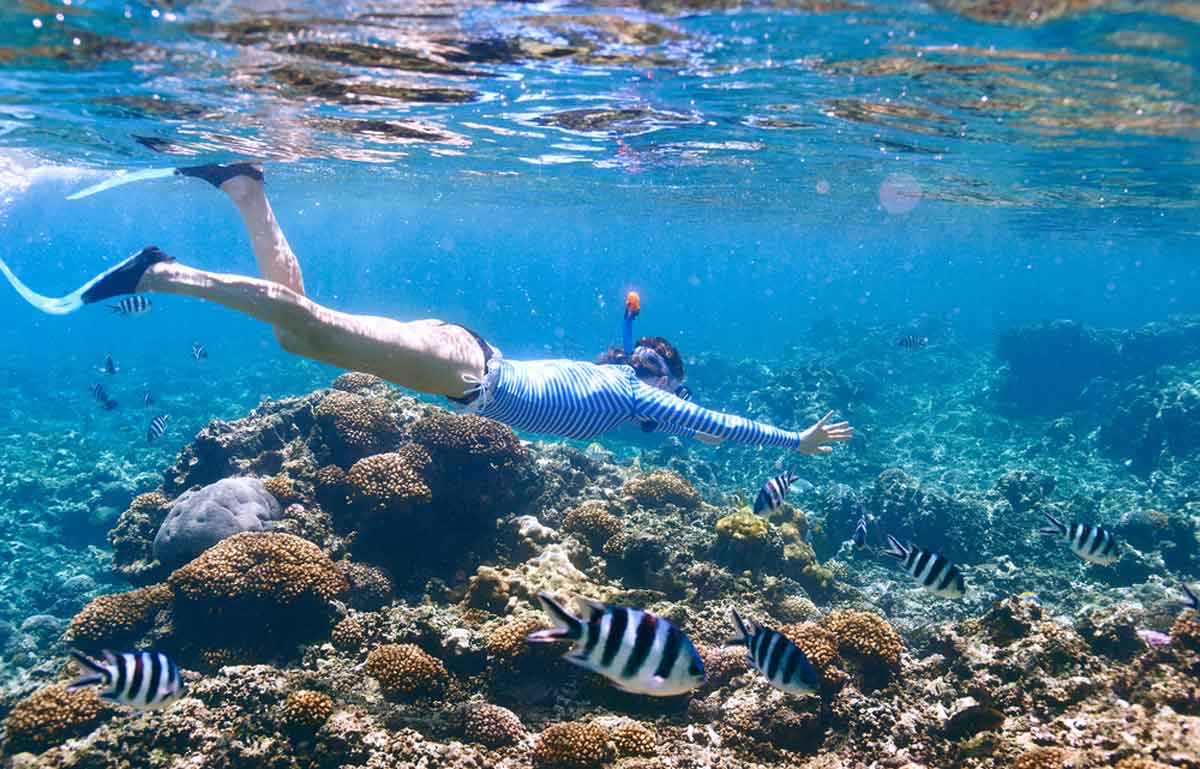 If you go on a holiday, most have a list of activities they want to try, as well as a list of spectacular sights they wish to see.

While snorkeling can provide a comprehensive activity in some of the most beautiful locations in the world, snorkeling on holiday time takes time to prepare the trip, and people want to know when the best times to go.

Many factors go into someone’s overall enjoyment of snorkeling, it isn’t just the location. Air and water temperature are certainly paramount, as is marine activity. Who wants to go and not see the fish, and turtles if they’re there?

While being busy might be off-putting to many, it is also a blessing for some as it provides safety if you’re not a confident swimmer.

Snorkeling is best enjoyed when you try and match the activity to how you live and ‘play’.

There isn’t a one-sided approach to wondering if morning or afternoon is best. Each has there own advantages,

The water temperature on the day will have as much to do with the time of year, and the prevailing conditions as anything else. Some regions of the world have freak cyclones, so that will alter things no matter what.

What’s going on on the surface can often be belied by what’s going on underneath. An offshore wind will move warmer surface water, and currents will have the same effect.

So whether you choose the morning or afternoon may not be as important as the factors that are important to you when enjoying an experience.

That said, here are a few things to think about when choosing a preferred time.

Car parking – Depending upon the location you may have to arrive early before the car parking fills up. Hanauma Bay on Oahu only has about 300 car parking spaces but 3000 people visit it per day. Getting there early means you have the freedom to leave when you want if you have a hire car.

Fewer people – Generally speaking, the earlier you go the less likely a lot of other people will be around. Even in popular destinations, it is still a tourist location so people partake in late night activities that prevent them from rising early.

Good time for photography – With the sun low on the water some of the photography for an early morning snorkel is stunning. You can get that glimmering sea photo, and with fewer people around it looks less hectic.

Fish can be active in the morning – While some locations are just teeming with aquatic life, again some aren’t and rely on tides and currents. Generally speaking, fish can be much more active after dawn as they search for food.

Cooler – In general, the daily difference between night and day is between 7 to 10 degrees. If the afternoon is too hot for you then the morning offers a bit more of a refreshing breeze. As the land heats up it creates an onshore breeze.

Early riser – If you naturally are an early riser it seems prudent to work with your body. If your brain is more active and alert in the morning then that might be a better time to go, so work with what you know about yourself.

No time for adequate food – With snorkeling in the morning you often don’t have time for a good breakfast that will sustain you for the day ahead. Snorkeling too close to eating can cause bouts of seasickness and nausea. A snorkeler inverts and dives so doing that on a full stomach can be an error you only make once.

No lifeguards – While some snorkeling locations are in National parks that have opening and closing times, others aren’t. You might see a lifeguard on duty sign and then times they will be present. Going too early may mean there aren’t professionals around to help you.

Safety – In tandem with no lifeguards, there are also fewer people, so there’s no-one to call to should you get into distress. I’ve seen people get caught by riptides while on tours, so it’s a good idea that there are people around.

Lower light penetration – With the sun not having risen as fully it can the full effect of the suns rays don’t penetrate the water, It’s not normally a problem by mid morning, but very early on the water is darker, which might mean the sights you wish to see aren’t quite as colorful.

Adequate digestion – Snorkeling is a physical activity and it’s not a good idea to do it on a very full stomach. The natural swells and inverted diving can make people ill if they are too full. Snorkeling in the afternoon allows someone to digest their breakfast fully as well as hydrae adequately.

Warmer water – With the sun having been up longer, the heating effect of the sun can make the water warmer, especially in the shallows

Transport – In locations with a great deal of heat, it’s normal for the ‘working hours’ to shift for when it’s cooler. Thus life starts a little later and finishes a little later. Transport like buses often run more often during the day and night more frequently.

Safer – With more people around, if you are new to snorkeling you may find more people present. While some might desire a quieter and more restrained location, the advantage of people being around means they can help you if you get into any difficulties. Lifeguards are more likely to be present during busy times as well.

Sunburn – With the sun fully up, its full effects can be felt. Along with those powerful rays comes sea glare that intensifies the light. If you’re prone to sunburn, snorkeling in the baking heat won’t help. A rash guard can be work for this exact purpose.

Busier – If you are confident in the water, and a good swimmer, then you might not be as worried by other people being around. Busy times in the afternoon can mean you don’t get to either explore or see as much as you might like.

If you are going on a snorkeling trip and trying to decide whether to go in the morning or afternoon, it’s not always easy or simple.

So much rests on how an individual prefers the conditions. Personally, if something is important then email or ask about it. Snorkeling tours can often be done in the morning or afternoon, so ask the company about what concerns you would be the best advice.

That said, you can make some basic decisions concerning the decision. You might be able to access a snorkeling beach at 6am, but chances are good that there will be no lifeguards there. At that point, it’s whether you are a good swimmer, and do you know where the riptides are?

If you’re new, I’d just stick to what other people are doing so there’s safety there.

The simple act of googling the location and doing a bit of research might throw up the answers you seek. When are the tides? Lifeguard times? Mosquitos? All are good questions to know the answers to, so you can make the best out of the information.

If in doubt, ask your hotel, they might well know a lot more about the pros and cons of a morning or afternoon trip.