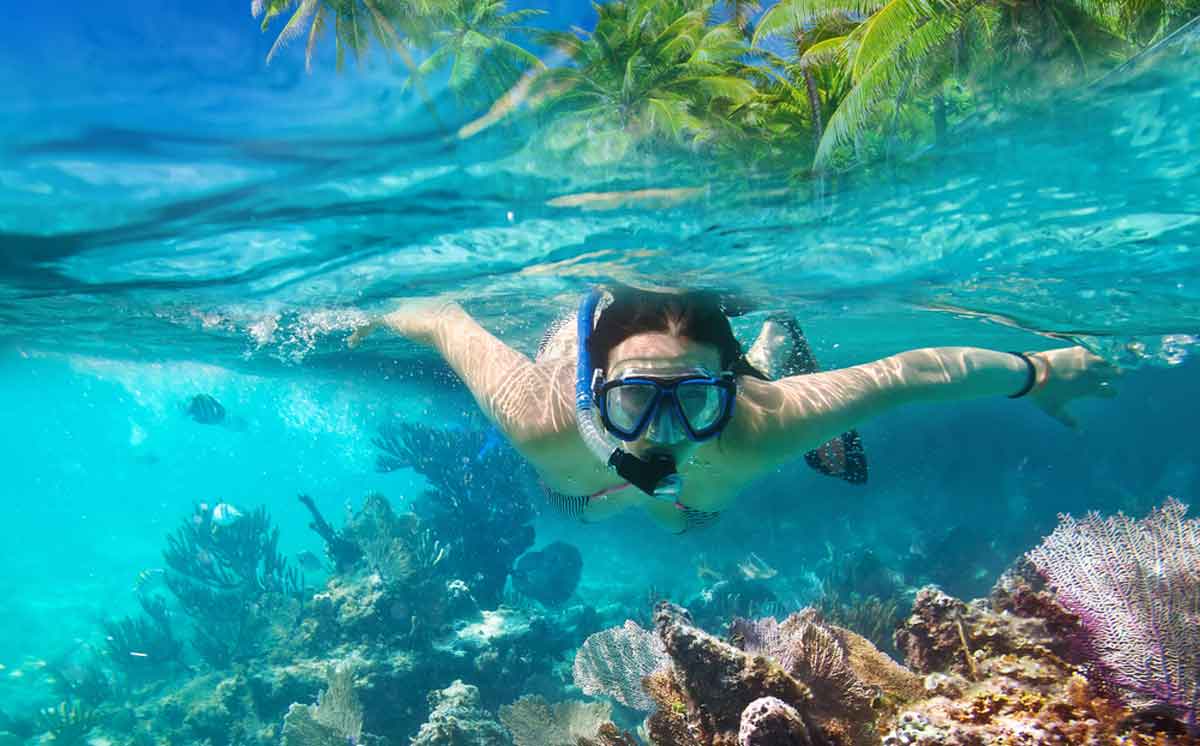 Thousands of people come to snorkeling every year, and for many, it’s a must try sport as they visit their preferred tropical getaway.

As it has a holiday connotation, many assume it’s just a leisurely activity, but snorkeling has many health benefits for those who enjoy the water and the aquatic nature around the globe.

For those attracted to the health aspects of snorkeling, it might be surprising to find out that the activity increases muscle tome and strength, as moving through the water offers a natural resistance that builds up muscle strength.

Snorkeling is mainly aerobic but can be performed anaerobically. Gentle snorkeling on the surface is aerobic and will burn calories so you can lose weight. Intense bursts of speed while snorkeling can be done, and this is anaerobic which will build endurance and muscle strength.

Essentially, snorkeling is either aerobic or anaerobic depending on how you enjoy the activity. It is also heavily dependent on several factors. A snorkeler’s level of fitness, along with the duration and intensity of the swimming is key.

An aerobic or an anaerobic snorkeling workout has benefits and understanding how they are achieved is beneficial for a complete fitness workout.

What Is Meant By Aerobic Excercise?

While it sounds strange, aerobic just means “in the presence of oxygen”

When you exercise aerobically, the activity should be either low or moderate intensity, which can be sustained for an extended period of time. The heart beats slightly faster and thus is defined as a cardiorespiratory exercise, but the activity can be performed over a length of time.

During an aerobic exercise, your heart will beat faster, and you may be slightly out of breath, but the body can replace the oxygen deficit easily in real time, so the activity can be sustained.

Activities such as walking, cycling, hiking, jogging, and skiing are examples of aerobic exercise.

What Is Meant By Anaerobic Exercise?

By contrast, anaerobic exercise is defined as ‘without oxygen’.

That doesn’t mean that oxygen isn’t used, but that the exercise breaks down glucose without using oxygen. Anaerobic exercises are short and with high intensity.

The body performs a short duration burst where the oxygen demand exceeds the oxygen supply.

Some examples of anaerobic exercise are sprinting, cycling, weights, or interval training.

Normally whether something is aerobic or anaerobic isn’t specifically defined by the sport, but how that sport is undertaken.

Most activities normally comprise elements of both, and snorkeling isn’t different.

When a snorkeler is lightly moving around on the surface in a gentle manner, they will be engaged in aerobic snorkeling.

The surface snorkeling is not intense and can be performed over a period of time, and is sustainable. The oxygen demand for the muscles isn’t excessive.

The heart is pumping oxygen rich blood around the body without creating a deficit. Despite the restricted breathing, your blood is well oxygenated.

As aerobic snorkeling is placing the body under very limited stress, the activity can be performed over an extended period of time. As it’s also considered a fun activity, this makes snorkeling an activity that can be done over many hours.

The more you practice it, the greater you will build up your aerobic capacity. The body acclimatizes and strengthens the appropriate muscles so that you tire less easily, and build up strength and endurance.

When a snorkeler undertakes vigorous activity such that they have an oxygen deficit, and the muscles are requiring more oxygen than the body can supply, then they are performing anaerobic snorkeling.

While snorkeling isn’t necessarily associated with this, many will perform bursts of activity that make it an accurate description.

When you snorkel at an ‘intense rate’ that will be anaerobic snorkeling.

As you intensify an activity, after a few minutes, a build up of lactic acid happens in the muscles to signify the depletion of oxygen, and a snorkeler will start to feel a burning sensation in the muscles.

Additionally, for a snorkeler, that lack of oxygen isn’t just identifiable by a deficit, but the lack of supply. A snorkeler may dive beneath the surface, and thus not intake any additional oxygen.

Anaerobic snorkeling helps build up endurance and develops a body system more resilient to any further high intensity bout of swimming. Bursts of speed over set distances underwater are anaerobic.

This will build muscle strength, making future snorkeling much easier on the body.

Undertaking snorkeling for any period will improve your aerobic fitness. It will also improve muscle strength, and burn fat in the process.

Snorkeling, much like any other fitness activity includes both elements of aerobic and anaerobic exercise. During the duration of your time in the water, there will be natural cycles of low intensity (the aerobic), and higher intensity (the anaerobic) effort against the resistance of the water.

One moment you might be gliding effortlessly on the surface looking at the seabed, and the next you might be kicking your legs more profusely. The difference will be whether you feel slightly out of breath or feel the need to take in more oxygen quickly with big gulps of air.

One thought on “Is Snorkeling Aerobic Or Anaerobic?”