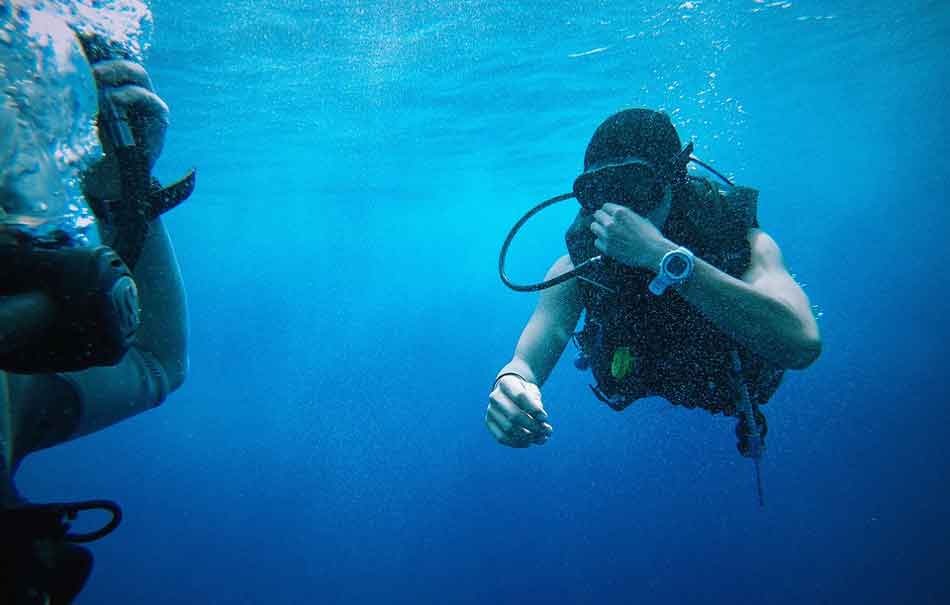 When you think of scuba diving, many of you likely envision coasting blissfully between blue, tropical waters.

However, the ocean is not the only place that scuba divers flock to.

Many divers enjoy going on freshwater dives in dive sites like lakes, rivers, and quarries.

New divers may wonder if diving freshwater is different from saltwater. Is it?

Freshwater diving is different from saltwater diving in many ways including buoyancy, temperature, currents, visibility, marine life, and dive types. Learning about these differences is important for deciding if you’d like to try out freshwater diving.

Let’s run through those differences.

One of the most surprising differences between freshwater and saltwater scuba diving is buoyancy.

This is because saltwater is a mixture of water and salt, meaning that it has greater density.

Water that is denser creates a greater level of downwards force, which makes objects more buoyant.

Thus, you will need more weight on saltwater dives than you will on freshwater dives. When you dive in freshwater, you’ll want to start with a bit less weight as there is less downwards force to counteract.

If you don’t know your ideal freshwater weighting, you’ll want to do a weight check to ensure you aren’t underweighted or overweighted.

However, one thing to keep in mind when thinking about weights in freshwater is that freshwater often uses different equipment such as a thicker wetsuit or the addition of gloves or a hood, which can actually mean you need to add weight.

Thus, a beginning diver may want to consult a more experienced buddy for advice on what weight to use.

Additionally, freshwater locations can be warm or cold. However, in general, freshwater scuba diving is quite a bit colder than saltwater diving.

This will mean that you will likely consume air more quickly on freshwater dives.

The most popular areas for saltwater diving are tropical areas where water is frequently very warm, with divers often needing no wetsuit or a shorty.

However, your typical freshwater diving spot will be a bit colder.

This means you may need a thick wetsuit, hood, gloves, or even a drysuit.

Meanwhile, temperatures in freshwater areas tend to have greater variance from season to season than saltwater environments.

This means your preparation can be quite different by month. If I dive in my local quarry during August,

I’ll wear a shorty. If I dive in November, I’ll be wearing a 7 mm wetsuit.

Another difference between freshwater and saltwater diving is that freshwater currents are lighter and more predictable.

Ocean currents have many factors that generate them, meaning they can vary greatly from one day to the next.

However, freshwater currents are typically caused by wind and very light. The obvious exception here are rivers. However, currents in rivers are typically fairly predictable as well.

Overall, your dive planning in terms of currents should go as expected in freshwater. You’ll also likely have a more effortless dive in this regard.

Visibility is perhaps the factor that scuba divers care the most about.

Most divers long for over a hundred feet of visibility. In saltwater environments, high visibility is typical. In fact, in many places, 30 foot visibility would be considered a very bad day.

By contrast, 30 foot visibility would be viewed as a great day for many freshwater divers as visibility tends to be much less in these environments.

There are certainly exceptions to this. The cenotes in Mexico and Iceland’s Silfra both come to mind as freshwater bodies with almost perfect visibility.

However, if you are diving in your local river or lake, you may find visibility measured in tens of feet or less.

The worst visibility I have ever had in freshwater was 2 foot. In the ocean, it was closer to 40.

The reason that freshwater tends to have less visibility is because the bottoms typically have much denser sediment. Additionally, with less current, particles tend to take longer to settle when disturbed.

Another difference you’ll definitely note is marine life. Saltwater environments are much larger in nature.

Thus, you see a larger variety of inhabitants as well as creatures of much greater size.

When scuba diving in freshwater, you’ll likely see smaller fish and other animals as well as less species diversity.

Another point is that marine life is typically less fearful of scuba divers in saltwater while freshwater fish may be more likely to keep their distance.

On the positive side, you’re unlikely to encounter many freshwater inhabitants that could harm you which may give some reassurance for a nervous new diver.

The final major difference between freshwater and saltwater diving is the type of dives.

With saltwater dives, you may do a shore dive but are more likely to be going on a boat.

However, freshwater dives are almost always shore dives where you walk into the water.

Thus, you’ll have some different factors to consider.

First, you’ll likely gear up and walk your gear into the water, possibly a bit farther than ideal.

You’ll also want to wear boots. While many divers wear boots in the ocean, they are definitely recommended for freshwater because of the walking.

Furthermore, freshwater diving means you’ll be swimming out to the point that you descend, putting a bit of extra effort into your dive.

However, with your BCD inflated, you can do this as relaxed or strenuously as you’d prefer.

Many people scuba dive in freshwater, particularly those who don’t live near the ocean and want to dive more often.

Freshwater diving is typically a bit different than saltwater diving.

When diving in freshwater, you’ll have less buoyancy, typically colder temperatures, less and more predictable current, lower visibility, and less of a variety of marine life.

You’ll also be more likely to do a shore entry. As always, planning for your specific dive site in advance is an important part of ensuring you will enjoy the experience.