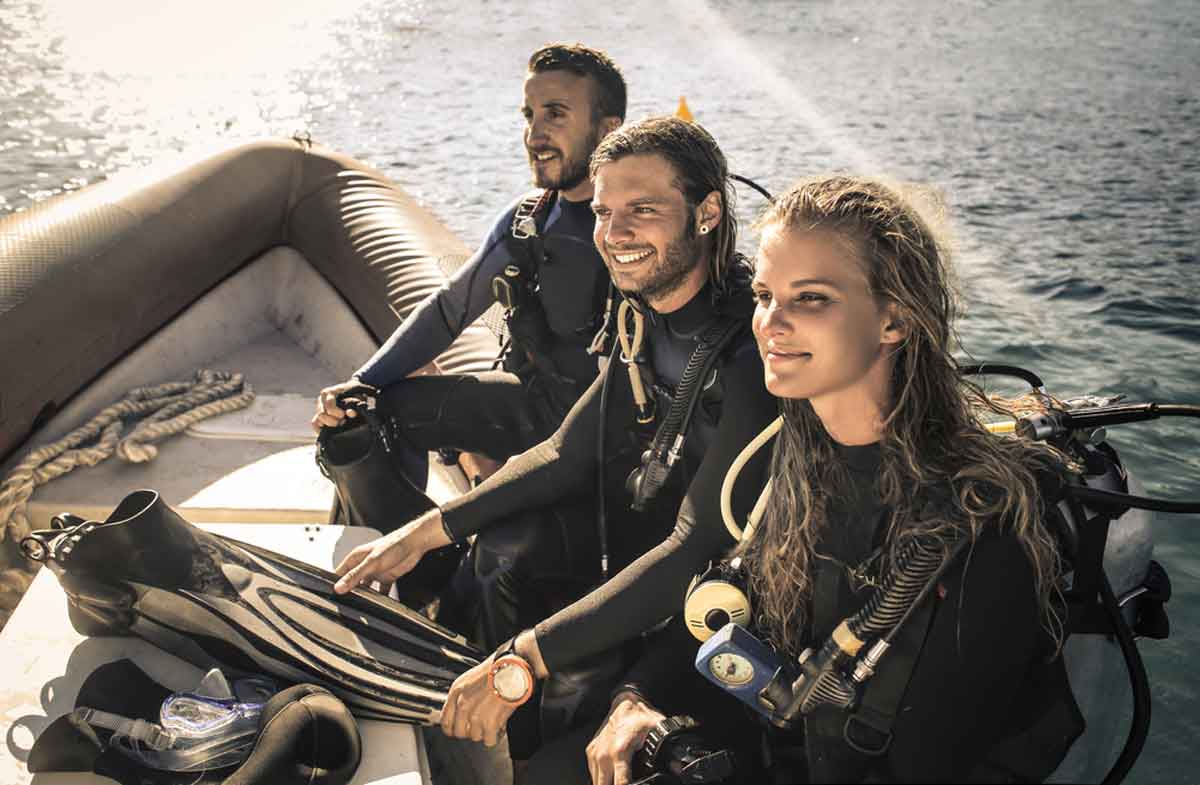 One of the most frequent concerns for new divers relates to the wide variety of scuba equipment that is required for dives.

After all, one glance at a diver and it’s clear that they’re carrying a lot of stuff.

For many people, they may wonder what scuba gear weighs and how this will affect their enjoyment of the sport. So, is scuba gear heavy?

Scuba gear is quite heavy – on land. In the water, it (and you) is essentially weightless. In total, a full set of scuba gear will add approximately 22 kilograms of weight to you. This is beneficial once in the water and only an issue between putting on the gear and submerging.

The reality is that even people who feel uncomfortable with the added weight are able to enjoy scuba diving. In fact, there are a number of best practices and tricks that divers can employ to minimize their time above the surface in full gear.

Let’s explore more about scuba gear and the issue of weight.

How Much Does Equipment Weigh?

The first question to address is the actual weight of the scuba equipment. Take a look at the table below to see the weight of various items:

Obviously, the heaviest item, as would be expected, is the tank. A standard aluminum tank weighs 16 kilograms. The other items make up the remaining 6 kilograms of weight.

Adding thicker wetsuits or cold weather equipment such as a hood or gloves adds a bit more weight, but the difference is largely negligible.

Another thing to consider is weights. Divers need weights in order to be able to sink to the bottom. These vary by person and are typically worn in the form of a weight belt or placed into compartments on the BCD.

When I dive in salt water, I wear about four kilograms of additional weight.

Thus, a fully suited up diver is carrying a significant amount of additional weight. While it isn’t as heavy as it looks, it will likely be uncomfortable for some people.

A typical rucksack – the heavy-duty backpack worn by soldiers – is approximately twice as heavy as diving equipment.

Is It Difficult to Carry the Equipment?

The difficulty of carrying the equipment will vary by a person’s frame and fitness. For me – and for most divers – walking short distances wearing full equipment is not that difficult.

However, recently I put on my gear while sitting on the ground.

Standing up from a seated position was quite the effort and took a few tries before I got to my feet. I quickly made a mental note never to do this again.

The key to managing the weight is to minimize the time wearing the gear before water entry. There are a few general guidelines that assist with this.

First, know that you likely won’t be hauling an aluminum cylinder to the dive site. Dive companies will take care of this. Many of them will take care of your gear as well. Thus, you will typically slip on the gear right at the point of entry.

For example, when I dive from a boat, I set my gear on the edge of the boat and put it on. Then, all I have to do is roll backwards into the water.

I never even stand in full gear.

When I dive at a freshwater quarry or lake, I typically don my gear while sitting on a dock and then roll forward into the water. Again, I never stand. This is a good practice as it saves your energy for diving.

For shore dives, you’ll actually walk a bit in your gear typically. But the goal is still to minimize the distance between putting it on and getting in the water. Typically, you’ll suit up fairly near the water at a place where you can comfortably do so in a standing position.

Scuba diving is perhaps the only sport in the world where laziness is a positive trait. Minimal effort in the water means more enjoyment and slower air consumption.

Above the surface, it means not unnecessarily taxing your body with full gear.

Is the Weight a Problem in the Water?

The weight of gear may seem cumbersome on the surface, but it can generally be managed.

However, what about when you are under the water? How heavy does diving gear feel then?

In reality, when you are at depth, you will feel weightless.

In fact, the goal for a diver is to be neutrally buoyant. This means you neither rise nor sink without effort.

How is this possible? First, think about your natural state in water. Have you ever stopped swimming in a pool? Notice that you don’t sink to the bottom? This is because of the air in your lungs that keeps you at the surface.

This is also why divers have to add weight. Even with the additional weight of full scuba gear, divers still need to add weight in order to effectively sink at a desirable rate and stay underwater.

Once you get to the depth at which you want to dive, you typically put a few puffs of air into your BCD, which makes you neutrally buoyant and essentially weightless.

When you dive, you will become accustomed to your gear. It will not feel cumbersome or heavy. In fact, you may even forget you are carrying a heavy tank on your back.

Is Physical Fitness Required for Diving?

Physical fitness is definitely beneficial for diving in a number of ways. When people are fit, they will breathe less oxygen and have more time at depth. They will also feel less tired after diving.

However, it is definitely not a requirement.

There are divers from all levels of fitness from couch potatoes to marathon runners. They can all have enjoyable experiences under the water. You’ll also see divers from various heights and weights.

Some people may worry that they are not strong enough to dive with gear. For example, can a 5’3”, 110 pound woman with a small frame dive?

The gear may prove to be more difficult on land, but remember that most dives involve very little time on land in gear, particularly those done on vacations.

The one time when someone may struggle a bit in gear is climbing a ladder back onto a boat or a dock. While most divers can do this with little problem, some may have difficulty. Fortunately, the boat crew is ready to provide assistance.

Thus, while physical fitness will make you a better diver, it is not required to enjoy the sport.

Is Weight an Issue When Traveling?

The final weight-related question that is common involves traveling. After all, carrying all that weight on vacation is surely awkward and expensive, right?

Actually, many divers prefer to bring their own gear when they travel. There are many benefits to this including comfort and safety as you are more familiar with your own gear than rentals and know that it fits.

Airlines typically allow luggage of weights up to 23 kilograms. However, remember that the bulk of weight a diver carries is from their tanks. Without the 16 kilogram tank, you’ll only be carrying 6 kilograms of gear at most, leaving an additional 17 kilograms for that bag.

Transporting your own gear will also help you save money by avoiding rental fees. If you are a frequent diver, this will quickly add up. Still, if you’d like to only bring certain items, most dive companies offer rental for virtually any type of gear you need. Many will provide a package of full gear, a smaller package assuming you have your own mask and fins, or offer gear a la carte.

The amount of gear that divers wear may seem like a lot for a new diver. In reality, most divers quickly become accustomed to diving gear. Typical dive gear weighs approximately 22 kilograms not including the weights needed to achieve buoyancy, which vary from person to person.

However, the reality is that diving gear is only heavy above the surface. You will be weightless below it once you achieve neutral buoyancy.

Limiting the time you wear gear at the surface by putting it on as close to entering the water as possible makes the task a lot less physically demanding than one would think.