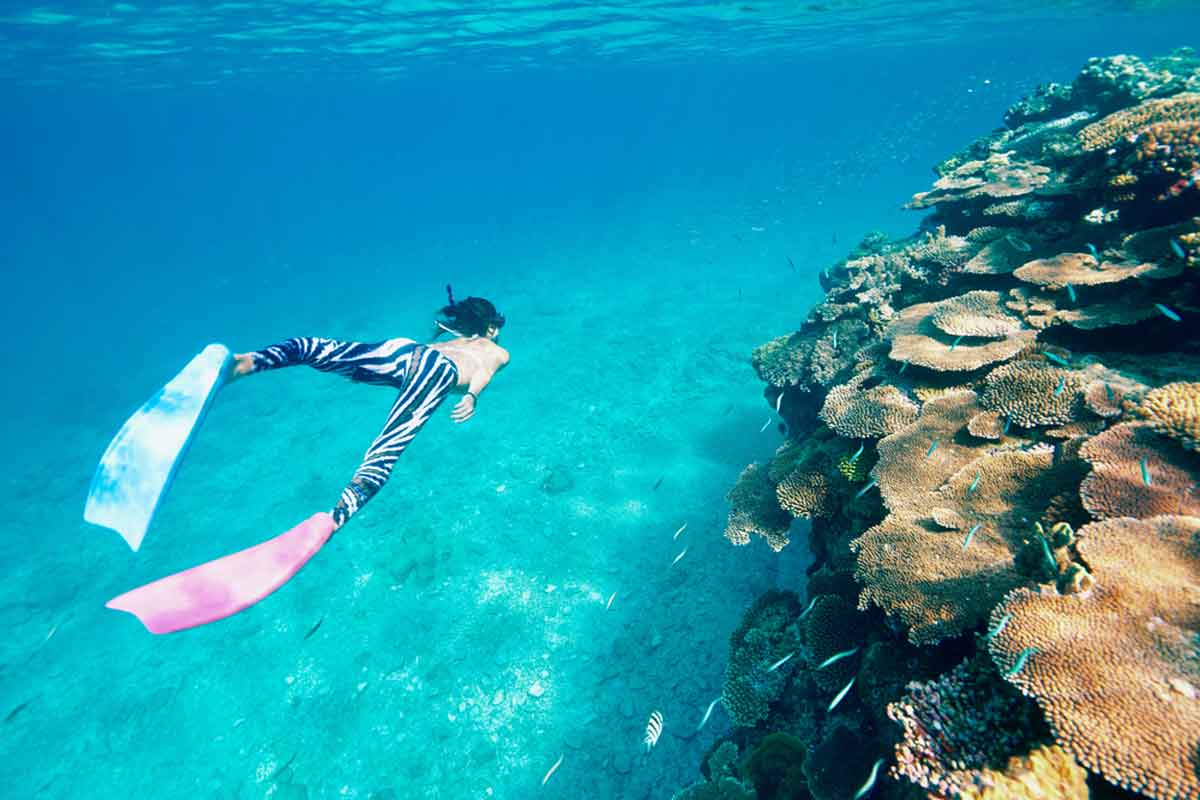 Of all the activities that exist snorkeling is entertaining and unique. It’s both fun and informative, but also adds cardiovascular and muscular strength to the swimmer.

Requiring only minimal equipment a snorkeler can swim amongst the corals and the fish for a few hours or an entire afternoon. The time can just whizz by.

Much like swimming, it’s a low impact sport so benefits those with joint issues. The water resists natural movement making snorkeling a great exercise for toning muscles.

As it’s physical in nature while having amazing experiences you are also burning through calories without realizing it. So, how many calories does snorkeling burn?

Snorkeling uses approximately 250 to 350 calories per hour depending upon the level of intensity. A typical snorkeling session might be 90 minutes of moderate exercise and burn 400 to 500 calories.

I’m not a health expert by any means, so if I’m way off on this, please drop a comment below but that sounds about right to me. I spent some time looking around the internet and playing on the free calculators to come up with some educated guesses.

How many calories you burn through if you go snorkeling is largely dependent on how long you stay for, how much time you spend in the water, and the level of intensity you wish to indulge in.

How Many Calories Do You Burn In An Hour?

Snorkeling isn’t quite like lying on a lilo in a pool. Despite the fact that it’s an exciting recreational activity that obliviously sustains the length of the exercise, it is actually physical in nature.

In a few ways, actually.

The snorkel actually restricts the passage of air to the lungs. Not in a permanent way but you are breathing through a tube so it is slightly harder. This increases your heart rate which increases the calories you burn.

The same for being underwater diving. Your heart beats faster producing the same effect.

Water is 830 times denser than air. It’s much harder to move through, so your muscles have to work correspondingly higher to achieve movement. This burns more calories as well.

The simple act of kicking with fins displaces a greater amount of water than with feet alone so requires the muscles to work harder.

All of this contributes to an increased calorie burn. Snorkeling is aerobic in nature with low intensity so you will definitely burn off the breakfast you ate.

If 250 to 350 calories per hour is an agreed range then it stands to reason, that as well as dependent on each individual it will also depend upon the type of snorkeling you embark upon.

Leisurely – This style of snorkeling is aligned with surface snorkeling and moving around looking at the underwater world. Keeping an even pace will probably burn the lower end of the range, around 250 calories per hour.

Moderate – If you go a bit further with effort, and as well as surface do a few frequent dives and generally spend some time fin kicking underwater you might burn around 300 calories per hour.

Active – If you are highly active, rest very little, and spend a lot of time diving and moving around you might burn approximately 350 calories per hour.

How Many Calories Will You Burn In A Snorkeling Session?

This will largely depend upon what you mean by a session.

A snorkeling tour in a holiday location might only be at an island for 90 minutes with say 60 minutes of time in the water. However, if you visit a known national park and do an afternoons snorkeling session you might easily be in the water for a few hours.

Everyone is different so there’s no limit.

If you just surface paddle for an hour before needing to get on the boat to return you might burn around 250 calories.

However, if you go beach snorkeling, are fit and active, and spend 3 hours in the water you might burn nearer 900 calories.

A good and reasonable average for a beginner is to assume you might be in the water light to moderately active for 90 minutes and burn 300 to 500 calories.

To put this in perspective

So, an hour of moderate snorkeling will burn off that cheeseburger, and after 90 minutes you can add a beer with it.

While snorkeling isn’t quite like running in the intensity stakes, it is still physical. The harder breathing, tougher water movement, and excessive fin kicks make it more calorie intensive than most give it credit for.

Snorkeling uses all the major muscle groups as you fin kick against the water resistance, and if you spend a lot of time finning you could burn up to 350 calories for every hour in the water.

As well as good exercise it muscle tones several groups, mostly the quads and hamstrings if you have decent sized fins.

One thing is for sure, you will definitely feel hungry at the end of snorkeling session.

The good news is that while you’d notice the physical exertion in normal life, like cycling, snorkeling is done in such a fantastic environment, you may not even notice you are exercising.