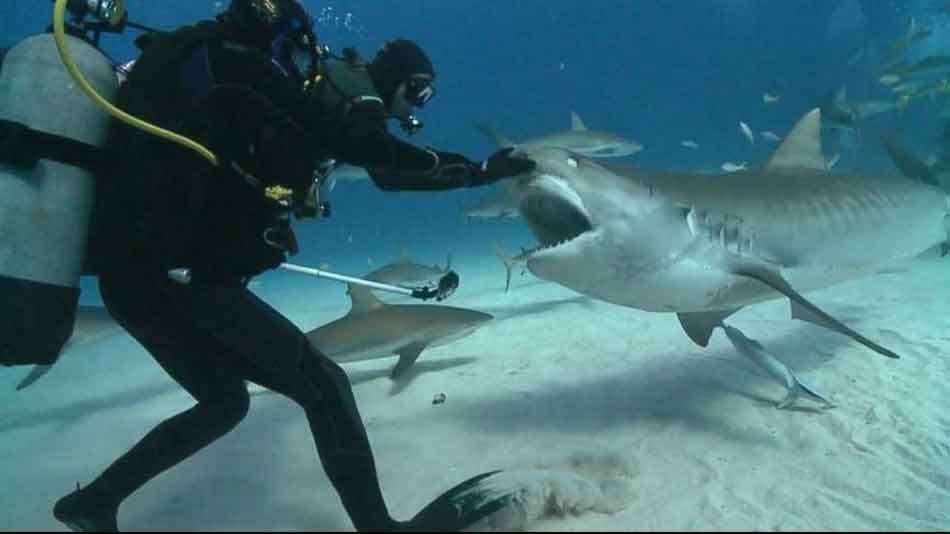 There are many amazing things to see under the sea; however, many people also have fears related to the marine environment. The most common fear by far is a shark attack.

A scuba diver can avoid shark attacks by not diving during dawn or dusk, avoiding areas where feeding or fishing is happening, and paying attention to things around you. However, the reality is that shark attacks are rare and understanding shark behavior can help you stay safe should you encounter an unpleasant situation.

There are clearly a lot of things to talk about when learning about how to avoid shark attacks.

Let’s get a sense of the important things to know.

How Often Do Sharks Attack?

Typically, there are between 70-100 shark attacks annually.

These are attacks that are known. It is important to make this distinction because many attacks from undeveloped nations may not be reported because publicity may hurt valuable tourism.

Over time, the numbers of shark attacks have risen. This is not because sharks are becoming more aggressive; rather, it is because larger numbers of people are going into the water, meaning more shark-human interactions.

In 2020, there were 57 unprovoked shark attacks around the world, the majority of which occurred in the United States, particularly Florida. Again, this trend is largely tied to areas where more people enter water.

Why Do Sharks Attack Divers?

There are believed to be a variety of reasons why sharks attack.

The most common reason is because they are provoked. In fact, 45% of shark attacks in 2020 were classified as provoked.

Provoked shark attacks often occur due to someone being careless (grabbing a shark or feeding it) or accidentally (following a shark, causing it to react defensively).

For unprovoked attacks, the type tends to fall into two major categories: confusion or curiosity.

Confused attacks typically occur when sharks mistake humans as prey. No shark actually views humans as food. If they did, there would be many more attacks. However, sometimes we can resemble their prey.

A common cause of this is great white sharks and surfers.

A surfer lying on a board in a wetsuit can look like a tasty seal. Additionally, while white sharks have good vision, they roll their eyes back when they begin an attack to protect them.

This means they don’t realize they are mistaken until after they’ve struck.

Curiosity is another reason. Sharks, like many animals, are often curious about things in their environment. How does a dog investigate things it’s curious about?

It often mouths them because its paws are limited. Sharks only have fins, so they also investigate things with their mouth.

The takeaway here is that sharks rarely attack out of aggression or feeding.

Obviously, you don’t want a shark to bite you for any reason. This is why understanding shark behavior and how to respond is important.

How Do Sharks Attack Divers?

There are actually three major types of shark attacks: sneak, hit and run, and bump and bite. Understanding these types of attacks can help keep you safe underwater.

When we imagine shark attacks, we usually think of sneak attacks.

Typically, the person will not see the shark and will sustain multiple bites. This attack is associated with predatory behavior and occurs when sharks mistake people for food.

However, the reality is that sneak attacks are the rarest type of shark attacks.

They are, however, often most fatal. Sneak attacks also tend to occur at the surface, so they are of little concern for divers. Sneak attacks are more likely to occur with surfers, swimmers, or snorkelers.

Hit and run attacks occur when a shark bites and then leaves.

This happens most often in murky waters and surf zones. It is typically a sign of confusion. The shark may be surprised by the presence of someone or mistake someone as food.

The final type is the bump and bite attack. Often, sharks will circle someone a few times before biting.

They will often also bump into them before biting.

These bites arise from curiosity. They can lead to repetitive bites if a reaction is one associated with prey such as thrashing.

In fact, scuba divers are only involved in 4% of shark attacks. (Surfers are 61%).

There are hundreds of species of sharks; however, nearly all attacks tend to involve one of three types of sharks: great white sharks, tiger sharks, and bull sharks.

While great white sharks are responsible for the most attacks, the shark that divers are most likely to encounter is a bull shark.

They have been observed by drones swimming far around surfers in California rather than swimming beneath them. Seeing one while diving is incredibly rare. They are typically not aggressive.

Tiger sharks are quite curious. They are known as the “garbage can of the sea” because they will eat lots of things.

Tiger sharks will still typically shy away from humans but may become curious about divers at times.

Tiger sharks have a reputation for being aggressive but actually are not.

A frequent diver will almost certainly encounter bull sharks from time to time.

They can be aggressive at times.

Despite this, divers regularly dive with bull sharks without issue. In fact, a popular dive expedition in Playa del Carmen specifically seeks out bull sharks.

How Do I Avoid a Shark Attack?

There are many things you can do to avoid a shark attack. Let’s take a look at some of the most important things.

Sharks are most likely to attack people who are alone. This is just part of their predatory behavior.

While divers are at a low risk, diving with a buddy or in a group will further reduce the likelihood of being the victim of a shark attack.

Watch What You Wear

There are two things that you’ll want to focus on here.

First, make sure that you don’t wear jewelry when you dive.

Jewelry reflects light which can look like shiny fish scales.

This may attract the interest of sharks and will definitely attract barracuda, who may also accidentally attack.

Many sharks have black and white vision, meaning contrasting colors is how they easily see things. Thus, bright colors can draw their attention due to the contrast against the blue water.

Make Yourself Look Small … or Big

This one requires a bit of judgment because it is highly situational. Do you want sharks to see you as big or small?

The reality is both are true.

If you encounter a shark that is showing no interest in you, you want to make yourself look small.

This will make it unlikely that the shark will notice you or see you as a threat or competitor for food. It allows you to stay put and watch the shark as well.

However, if a shark has shown interest in you, particularly if it is circling you, you want to make yourself look large.

Turn vertically in the water and widen your body to show size. This will deter an investigative bite.

A key way to avoid shark attacks is not to dive during certain times and places.

First, do not dive during dawn or dusk as these are times that sharks tend to hunt and can make it more likely that you’ll be mistaken as prey.

Secondly, never dive in an area where sharks are being fed. This is actually a popular way of attracting sharks in some tourist destinations in order for divers to get good photos.

Even in these situations, shark attacks are rare; however, it vastly increases the likelihood. A shark that is eating will be far more likely to bite.

Finally, never dive in an area where people are actively fishing. The same reasoning applies here.

Hooked fish are distressed fish and can attract sharks who sense their struggle on the line.

This sends sharks into feeding behavior.

Pay attention to where you are and what is going on around you.

This is important for scuba diving in general. You are more likely to encounter sharks in certain areas such as steep drop offs or sandbars because this is where hunting is easy for them.

Sharks are also typically swimming near the surface.

Additionally, if you do see a shark, particularly a type associated with higher frequency of attacks, pay attention to it.

You should never turn your back on a shark.

Making eye contact with a shark will deter an attack in many cases as the shark will prefer to bite when something is not paying attention to it.

Sharks are often feared by many people; however, shark attacks are very rare.

The biggest threat to a diver is provoking a shark or curiosity. Knowing what to do can keep divers safe.

The most important rule is to be aware of your environment.

Never turn your back to a shark, especially a bull shark or tiger shark.

Understand their behaviors and how to respond. This will further decrease the already low chance of becoming a shark attack victim.