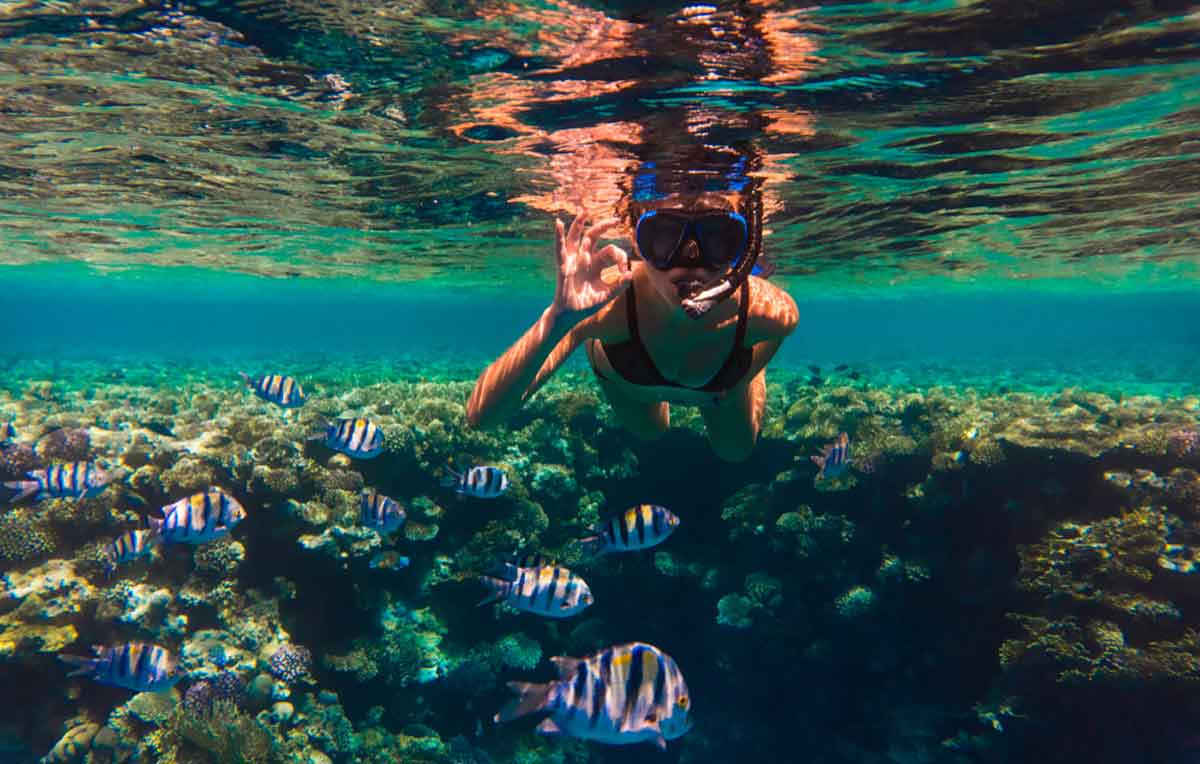 When you think about communicating with another human most naturally assume verbal. After all, most people might assume that communication is about talking.

But most people are wrong.

A few studies have been done that show verbal communication is just 7% (or thereabouts) leaving a whopping 93% of information transactions between us as non-verbal.

Sometimes communication is a shrug or a look, but often there is a deliberate attempt to move away from the verbal as a means to convey a message.

So when verbal communication is either impractical (underwater) or unadvisable (army patrol) then a set of recognized hand signals is used to convey information.

Every sport has a set of communication rules for hand signals where they may be practical, but what about snorkeling? Do snorkelers use hand signals?

Snorkelers don’t need a set of hand signals as scuba divers might. While they aren’t required it’s advisable to learn a set of basic hand communications to convey important safety information.

Like most activities in life, clear, concise, and easily understood communication is a critical factor. It’s no different for water sports.

Snorkeling, while not as dangerous as scuba diving from a technical point of view, can still present situations where you might want to communicate effectively and quickly.

You may be beyond audible range, and knowing a few basic signals might help. While above the surface you may communicate as normal, but underwater you can’t speak, so anybody involved in water sports has learned a few basic hand signals.

While there are numerous signals if you want to go into the whole range, for snorkeling a lot of them are redundant, so here’s a simple list of the ones you might encounter.

Many of them are fairly common to normal life and you will have seen them before, but to avoid confusion they often have very specific meanings.

As alluded to earlier, the snorkeling community doesn’t have a set of agreed signals in isolation to other sports.

However, scuba divers do and will use a set of agreed signals to communicate effectively. For a snorkeler, many of them aren’t necessary as they aren’t relevant, but others can be useful.

A snorkeler is never going to need the ‘bubbles/leak’ signal, or need to communicate to their diving buddy that they need a decompression break.

However, some signals might be pertinent for a snorkeler to learn.

In case you are thinking of not learning, consider, you may need to communicate to someone you don’t know, or indeed receive one yourself.

If someone made the ‘distress’ signal to you while in the water 50m away with waves drowning out any audio, would you know what it was?

So let’s work through a few you might find useful.

Firstly, a word of warning. OK is not the thumbs-up sign. That signal means to ascend or the end of a dive.

Most people learn the ‘OK’ hand signal early on. It seems to have been learned by many people at some point through life.

The OK hand signal can be used as a question and a response.

If a buddy does it to you, then you are meant to reply, hopefully with the same hand signal. Likewise, if you do it to someone in the water, they should reply.

Failure to respond should mean that something is wrong, but as most people on a beach don’t know this, then you have to use some common sense.

While a small OK finger signal is fine for the proximity of diving, the greater distances involved on the surface needs a different signal.

While in the water if you place both hands on the top of your head so the person you are signaling is in front of you, making sure your elbows form a loop effect.

Touching the head, even if with one hand signals to other water users that you are OK.

Not OK Signal – Something Is Wrong

As a snorkeler, you will probably never need this but you might be in the water and see it, and as it’s important, it’s worth learning.

To communicate a problem, extend a flat open hand, palm down, and rock the hand back and forth.

If someone said to you ‘did I guess right?”, and you made this gesture then you’ve got the action correct.

As a diver, or water sports enthusiast though, it means that something is wrong.

If it’s followed by a pointing gesture then it becomes ‘something is wrong in that direction’.

This one can be highly confusing because it’s basically a one-handed wave.

Any surface based communication usually involves the whole arm as the movement is more easily visible at distance.

So while OK, is two hands touching the head, NOT OK, is a one-handed wave, made as if you were saying hi to someone.

So if you’re in the water, don’t wave to anyone you know as it can easily mean ‘not OK’ to other users, boat pilots, and captains, as well as lifeguards.

There’s never much confusion with this one. While in normal life you might do it with one finger, for a water user the same action is performed with all the fingers.

With a palm face up, and pointing towards a buddy, curl the fingers up and then extend them. Repeat the movement.

This is a signal more appropriate to use by instructors but you may see it so it might be worth committing it to memory.

The hand is extended palm down and then moved downward, when you have good eye contact with your buddy.

It doesn’t mean ‘go down’, but rather reduce speed. You could be missing something or overexerting yourself.

This another common signal that has been transferred to aquatic communication.

While there are two signals for this, the common one makes you look like a traffic cop. If you imagine trying to stop a car as you cross the road, then that’s it.

It’s just a flat extended palm towards your intended buddy.

Again, while a snorkeler doesn’t need the look at me style of this hand signal it might be useful if there is something that you want somebody else to look at.

The underwater world can be teeming with life and you may spot something that would be of interest to your partner. Or at least make somebody aware of something.

To make the look signal just extend only your 2nd and 3rd fingers and put them up to your mask towards your eyes.

Once the snorkeler who makes this signal to a partner receives eye contact that they’ve understood and then points in the direction they wish their buddy to view.

Go In This Direction Signal

To indicate a direction a diver may just flat vertically extend the palm using all the fingers.

Using one finger is more associated with the look signal.

Five fingers more indicated the wish to travel in that direction indicated.

Danger In This Direction Signal

Let’s hope you don’t need this one.

Or indeed see it.

As it’s important though, I will include it. Someone may be trying to inform you of a rip current that you’re about to swim into.

To make the danger signal, clench your fists and then cross them over your torso, like two crossed sword blades, or a skull and crossbones.

Once you think they’ve seen or acknowledged your message you can point with a clenched fist the direction of the danger.

Hopefully, you’ll never need that one, but like ‘not OK’, it’s the warning ones that you need to know first.

Snorkeling is normally not particularly fraught with danger, or the need to communicate with anything other than verbal communication so it’s not worth overly stressing about learning a set of signals.

However, they are common signals to those in the water sports pastimes so if you see them you will at least know what they mean.

If you go snorkeling in shallow water and don’t stray into the depths then you may never need these signals, nor will you see them.

But learning the ‘not OK’ on the surface is useful in case you see a diver or swimmer in trouble.