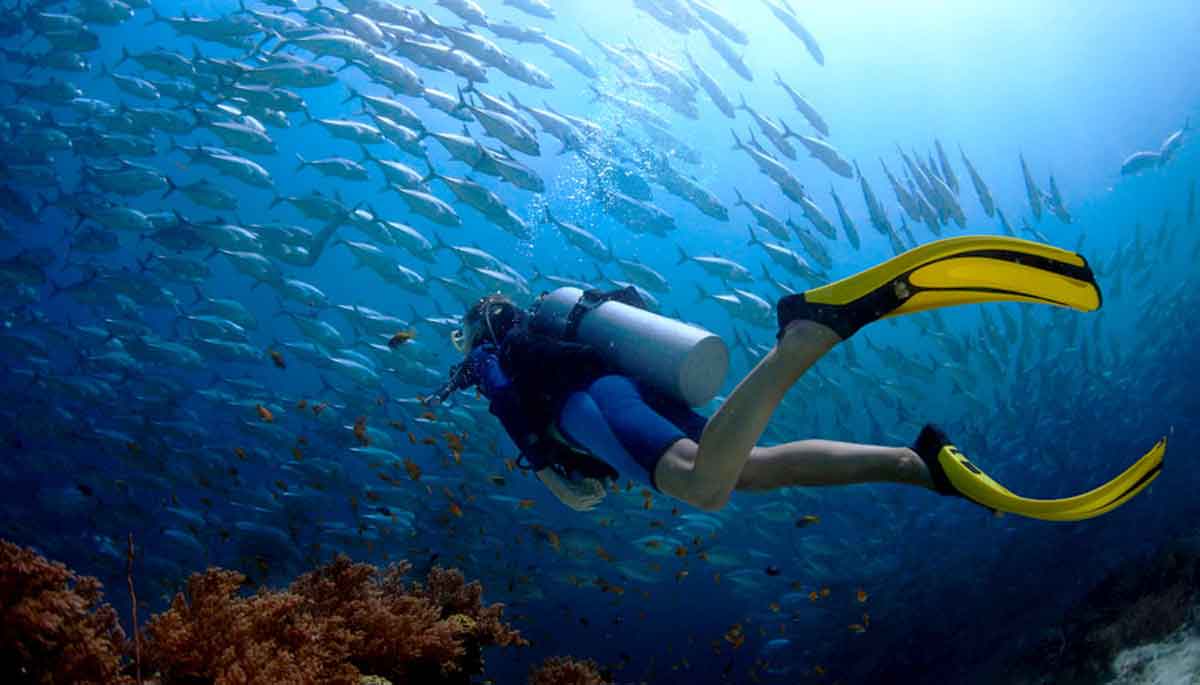 Safety is an important aspect of scuba diving. This is clear to anyone who has ever even taken a basic open water course.

However, many people frequently ask questions about how to stay safe once actively in the water in terms of being protected from sharks and other predators.

This is a natural concern. After all, when we are in the water, we are not in our environment but rather theirs. We’re also very slow by comparison and – let’s face it – no one really likes the thought of being bitten, stung, or digested by something else.

One of the frequent questions that divers tend to ask is related to the color choices of their gear. This has been particularly relevant since scuba gear began being produced in many different colors. Do bright scuba gear colors attract predators?

Yes, bright colors can attract lots of different fish including some predators. However, unprovoked attacks on scuba divers by any underwater species are extremely rare. Furthermore, most divers would prefer to attract fish, even some predators. Combine these facts with the safety benefits of bright colors making it easier to be seen, and there is no reason you should avoid them.

Let’s take a closer look at this question.

What Role Does Color Play Underwater?

This in of itself is an interesting question and can have many different answers that vary depending on the organism in question. One of the major purposes of color is communication. This can be seen in different species for different purposes.

For example, young and adult parrotfish have different colors. Meanwhile, some species of grouper change color to indicate readiness to mate, an efficient tool on a reef filled with hundreds of fish.

Another important use of color is camouflage, which allows organisms to blend in rather than stand out. Many octopuses can expertly change color to blend to their environment. Some fish change their color from stripes to bands depending on if they are swimming or still. Others have a “fake eye” on their tail which can confuse predators.

Color can also be used as a warning. For example, the slow swimming lionfish is believed to use bright colors to warn other fish of its venomous spines. Bar jacks turn from silver to black when swimming with stingrays to protect their territory from other bar jacks.

Finally, some fish use countershading as a form of camouflage. Countershading involves having distinct color patterns depending on whether you are looking upwards or downwards (think sharks with white bellows and grey tops).

As can be seen, there are a wide array of functions of color in the ocean. It would seem to suggest that fish can see color. This is largely true.

In fact, a great deal of research has been conducted on this topic. One of the most interesting studies involved fish that were dyed red and treated with a foul-tasting chemical. Snappers quickly learned to avoid the red fish and instead eat the normal colored ones.

However, not all fish are able to see color. Specifically, sharks cannot see color. This has been confirmed by university researchers in Australia. In fact, while sharks’ eyes contain the cones that perceive color, organisms must have multiple types of cones, meaning that sharks only have monochromatic vision.

Thus, the answer about whether fish see color or not is that it depends on the fish. However, most fish likely can see color.

Are Predators Attracted to Bright Colors?

When people are asking about predators, they are typically talking about sharks and sometimes barracuda. A novice diver may also wonder about moray eels; however, despite their menacing look, they are not going to bite a diver unless provoked.

Let’s start with sharks. If you’ve been around the diving community long enough, you’ve likely heard the phrase “yum yum yellow,” referring to the belief that yellow attracts sharks.

We’ve already established that they have monochromatic vision, so clearly they aren’t attracted to color that they cannot see, right?

Actually, sharks do seem to be attracted to color, particularly yellow. An old experiment by the United States Navy put dummies with different colored life vests in the water. Sharks most frequently approached and interacted with yellow ones.

The television show MythBusters attempted to prove this myth wrong. They put bait into bags of many different colors and dragged them behind a boat. Sharks attacked the bags of all colors, but attacked the yellow ones slightly more often. This suggests that while sharks rely on senses other than color to hunt, they are attracted to yellow.

The reality is that sharks are not attracted to a color in particular as much as they are attracted to high contrast colors. Yellow stands out more easily than any color; thus, it generates more interest.

Barracuda are also attracted to bright colors (as are many things in the ocean); however, they will not attack a diver wearing bright colors. The big danger for barracuda is highly reflective shiny things like jewelry. A diver with a wedding ring may end up needing stitches.

Should I Wear Bright Colors?

Your color choice is obviously completely up to you. The brightly colored diving gear is particularly popular. The reality is that wearing brightly contrasting colors will attract some animals; however, this is highly unlikely to lead to an attack.

In fact, many divers want to observe wildlife so attracting fish of all sizes is a goal. In fact, many species of sharks are notoriously shy, meaning that bright colors can lead to sightings divers would otherwise miss.

Additionally, there is a major safety component at play with bright colors. You have likely noticed that your backup air source is likely yellow. This is because the color makes it easier to see in the water and easier to find quickly in an emergency.

Bright colors are also very useful for diving in low visibility conditions as it helps you find your dive buddy more easily. I have frequently been diving in quarries with ten foot of less visibility.

The only thing keeping me able to see my buddy in front of me were her pink tank or yellow fins.

In short, even if you are leery of predators and don’t want to attract them, the bright colors are useful as a safety measure. The truth is they are far more likely to help keep you safe than put you in danger.

The one exception to this is if you plan to take part in a shark diving expedition such as those offered by dive shops in Jupiter, Florida. These tend to be baited trips and bright colors are not allowed as sharks are already being fed which increases their aggressiveness and can cloud their judgment a bit.

If you do want to stay less visible to predators, you should opt for blue gear or potentially black or grey colors. These colors will keep you relatively muted underwater.

While most fish are believed to see color, sharks do not. However, they do see contrast between bright and dull colors, meaning that bright scuba gear stands out to them.

When underwater, you are much more likely to encounter an equipment problem, become entangled, or act improperly in an emergency than you are to be bitten by a predator.

Bright colors do attract fish, including predators like barracuda or sharks. However, this is a feature rather than a bug for many divers. Also, the safety benefits of bright colors vastly overcompensate for the potential of a bite.

If you would prefer to blend in underwater, go with a muted color, ideally a blue. Otherwise, feel free to choose any color you’d like.