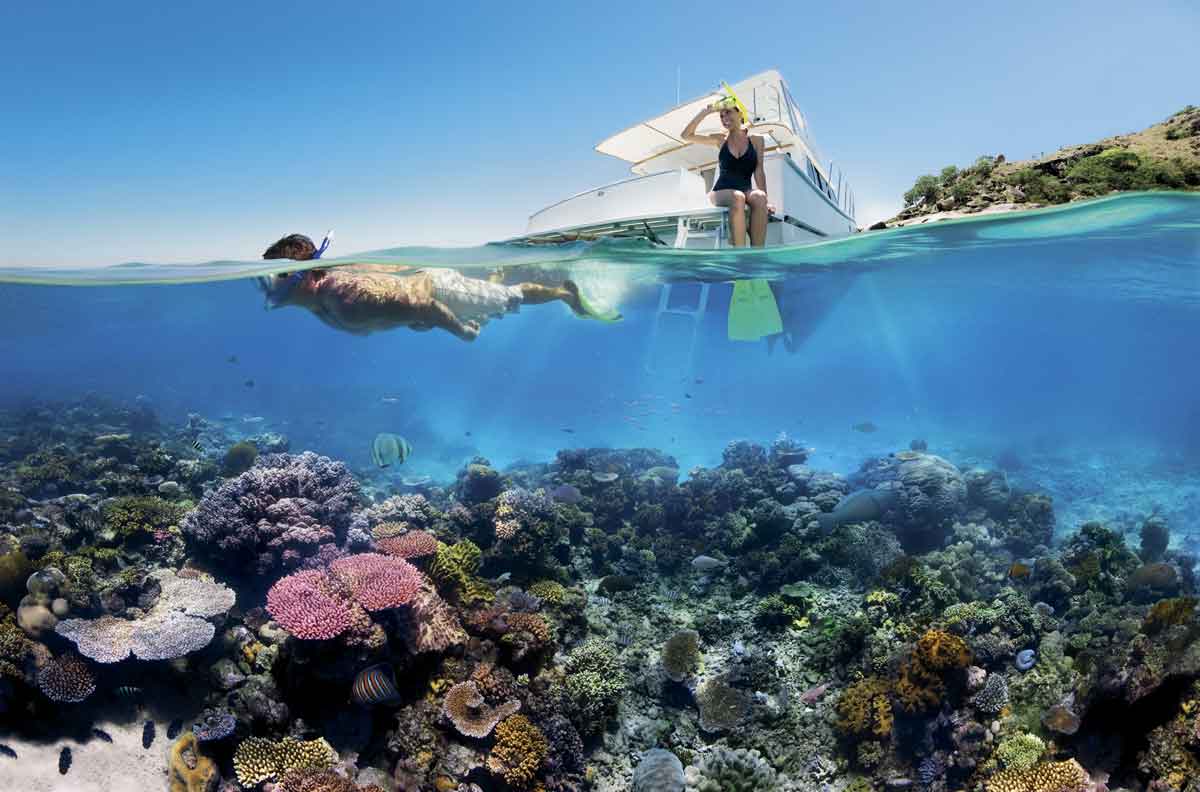 On almost any bucket list of ideas is a visit to the Great Barrier Reef. Whether it’s just a boat trip, a snorkeling trip or you are going to don the scuba gear it’s been a World Heritage site since 1981.

With around 5 million people vising the reef every year it is certainly popular, and if you spend the effort getting there many people wonder if you can snorkel amongst the corals and fish.

After all, why get all the way there just to see it from a boat. So, can you snorkel in the Great Barrier Reef?

Yes, you can snorkel the length and breadth of the whole Great Barrier Reef all year round. Snorkel tours run from Rockhampton to Northern Queensland throughout the year, with Cairns being the most popular.

As you can snorkel at any month in the year you like, the question then becomes what time might be best to go.

There is certainly plenty to see at any time of year but between December and May are the summer months. The dry season is considered between May and November,

The ‘rainy season’ is considered to be between December and March.

Wet season – From December to March you can still visit the reef anywhere you like, and you will still a vast array of marine life.

January to March – The vast majority of turtles hatch during these three months. After hatching they make their way to the Pacific ocean. The heat from the summer helps incubate the eggs, which were laid between November and January. The gestation period is between 45 and 75 days meaning they hatch January to March.

March onwards – Once the rainy season ends, the Great Barrier is considered to get ‘better’. More species of fish arrive, and whales may even be seen.

July/August – These two months are considered the best time to visit the reef. The water is purer, and the divers and snorkelers frequent the Queensland coast. You start to see rays, the most species of fish with more whales. All in the clearest blue water.

What Is The Great Barrier Reef?

The Great Barrier reef is a series of complex small islands, atolls, shoals, and coral reefs extending between 10m to 100m off the Queensland coast in Northwest Australia.

It starts on the Northern tip to Bundaberg, just North of Brisbane.

There are said to be over 3000 singular reefs that make up the natural wonder, from stand alone reefs to those off the coast of an island.

The complex has been formed over millions of years from the marine life of the Pacific.

Can You Snorkel The Whole Of The Great Barrier Reef?

The reef isn’t beach snorkeling so you will have to find an open tour operator. But yes, you can snorkel from any area of Queensland and get a tour to the Great Barrier Reef.

Many people say that the reef isn’t worth seeing South of Mackay but you can get tours all along the coastline. The North is generally regarded as better.

Tourist boats that take groups out operate from many areas, with the boats being pontoon styled in nature so there is easy access to the water.

Undoubtedly the main area of attraction is centered around Cairns and the Whitsunday Islands.

Drive through any port, town, or city along the coastline and you will see adverts for daily tour operators.

Can You Snorkel The Great Barrier Reef All Year Round?

There are no official regulations that state you can’t visit the reef at some point or another along its route.

So no matter what time you are in the area, you should be able to find an operator that is doing a tour.

In order to protect the reef as much as possible, the Great Barrier Reef Marine Park Authority has set specific mooring locations around areas they are trying to protect, so you are limited in that sense, but all of the Barrier reef is accessible.

Everyone must comply with these rules.

Are There Dangers To Snorkeling The Great Barrier Reef

One of the things that put people off is the belief in the dangers of snorkeling in the open water with plentiful marine life. I mean, there must be sharks, and poisonous jellyfish, right?

There are five million tourists who visit the reef every year, and in 2016 there were 10 deaths associated with visiting the corals. This prompted some legislation about boats carrying life vests and buddying systems.

In 2020 a total of 5 unprovoked shark attacks happened in the whole of Queensland, 2 of which were fatal.

In 2018, there were 4. This number caused some media speculation as it was considered above average.

So while it’s true that sharks can attack, even unprovoked the handful of deaths worldwide, although slightly off skewed by the fact that the big three (White, Tiger, and Bull) are all found in Australian waters, they are extremely rare.

They just tend to make the news.

There are different statistics all around the internet so who knows the exact number but you have to go back to 1929 for the record number of fatalities in the whole of Australia. Which set the record at 9.

Again, 5 million tourists and a few fatalities each year is not a large amount considering. It is unfortunate but it shouldn’t be a set of statistics that let’s fear rule you.

According to statistics you are more likely to die from a falling coconut.

You will only see sharks will only be seen if you are lucky. They will most likely be a reef or nurse sharks.

In summary, yes you can snorkel the Great Barrier Reef anywhere you like as long as you can find a tour going there.

It’s available all year round, but the better months are July and August.

You can travel up the Queensland coast from Bundaberg to the Jardine river and you will find dive tours all along the route.

From Brisbane, many report that the best snorkeling tours for the Barrier Reef start around Mackay and Airlie beach, but wherever suits you.

The most popular spots are Cairns and the Whitsundays, and like the rest of the reef, you can take a snorkeling tour any time you like.