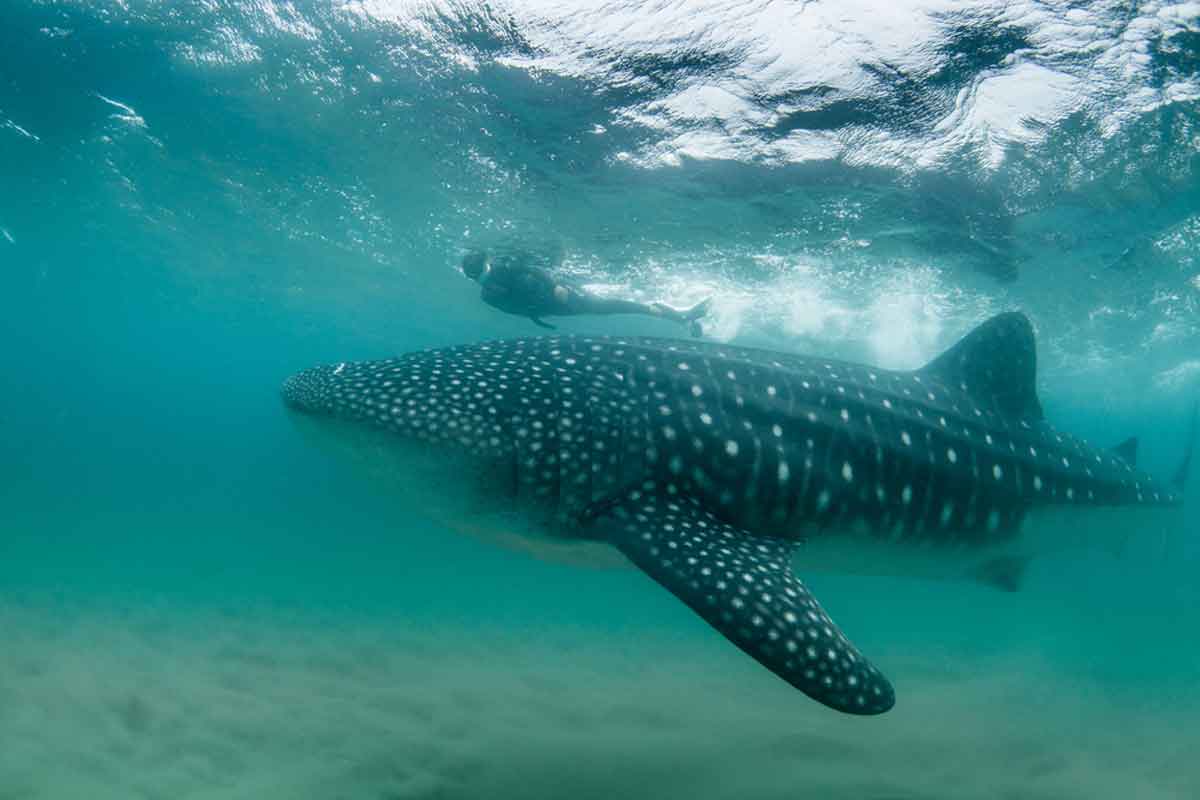 Snorkeling always looks idyllic, and they’re right, it is. The combination of tropical weather, beach paradise, and marine wildlife tempt many to give snorkeling a try.

Even a small amount of research will bring up images of people swimming across the surface, looking down at the most beautiful underwater world. If you have never done it before, it’s only right to have a few questions.

The ocean should be respected as a place where unseen dangers may arise. From aggressive marine animals to the awesome power of nature itself as the watery environment turns on you.

So, can you snorkel in the open ocean?

Yes, you can snorkel in the open ocean. Many tourists spots around the world are classified as open ocean where you an see large marine animals like whale sharks and killer whales. While open ocean typically refers to over 12 miles offshore, most tend to use the term to mean just beyond what you might consider ‘beach snorkeling’.

Whether you are a swimmer or a snorkeler, there needs to be a healthy respect for the environment you are in.

I’m not advocating excessive caution that in the end might be off-putting, but rather, a common-sense risk appreciation based on what are typical realities.

So what are the risks? Perhaps more importantly, what do we mean by the open ocean?

Technically the open ocean is more properly defined as being over 12 miles from the coast with at least 200m of water below the surface.

Now, you could technically you could snorkel in that environment, the question is why you’d want to. It would be a real pain to travel to, and there’d be nothing to see.

The whole point of snorkeling is to swim along the surface, occasionally diving beneath, in order to immerse yourself in the marine environment.

What people tend to mean when they say ‘open ocean’, is an area slightly beyond what you might consider beach snorkeling, possibly in an area where you can’t stand up in.

Many top spots around the world are classified as ‘open ocean’ by snorkelers in passing. The bay’s around Oahu, the islands of the Caribbean or even the Great Barrier reef tend to get classified as open ocean snorkeling.

If that’s your definition, then yes, you can definitely snorkel in the open ocean.

Dangers To Be Aware Of Snorkeling In The Open Ocean

If we are talking about an area of water a little beyond the beach that you may want to visit while snorkeling then by all means go for it.

There’s a little fear of the unknown in humans which tends to exaggerate things, but there are still very real problems that can arise.

If you are going beyond beach snorkeling then if it’s your first time then it’s sensible to stick to what you find comfortable. Never feel pressured into accepting a risk you are not comfortable with.

If you are new and see swimming pool lane dividers, make sure you stick within the boundaries. They’re there for your protection. I’ve seen at least one and heard of many more, snorkelers who stray beyond the bounds and have to be rescued by the safety boat because of rip currents.

In general, the better the weather in terms of wind, the lower the wave height, and the calmer the sea the better off you will be.

In general, then, a few things to think about;

Weather – make sure the weather is what you are comfortable with. Ominous skies, with brewing storms, is not the time to venture out of your comfort zone even if you are on the holiday of a lifetime.

Riptides – these are strong current flows that move with the rise and fall of the tide. You may find them around harbors or headlands, but they are VERY powerful, you can’t swim against them – a snorkeler is going where the water is going.

Rip currents – similar to riptides but from a beach. The returning wave water flows back into the ocean and causes a powerful current that can extend to around 300m out to sea. Again, if you get caught in one, you are going where the water is going

Lifeguards – beyond a certain range other people may not see you, and lifeguards might not see any distress. Remote areas may not even have lifeguards so make sure you have people around you.

Barracuda – depending upon where you are snorkeling, you may see Barracuda. Despite their reputation, fatalities from Barracuda are rare. Swim rhythmically, and not like a distressed animal will help, as they are scavenger fish.

Jellyfish stings – these can float around and potentially be problematic, more from number than an individual fish.

Marine life – most marine life is probably more cautious of you than the other way around. Fish may be curious, the very attraction of snorkeling, but octopus and eels will leave you alone rather than attack.

The big one everybody seems to fear is sharks, but popular snorkeling areas rarely get shark attacks, even on something like the Great Barrier Reef where there are Great Whites around.

Take a look at this video to see what I mean

To summarize, yes you can indeed snorkel in the open ocean.

We can argue over definitions but there are many snorkeling locations around the world that are beyond a beach where the water is deep enough for whale sharks to visit and you can snorkel beside them.

The same is true for shipwrecks, reefs, and atolls.

Nearly all popular spots have a lifeguard or a tour that you will be quite safe. A tour will never take you out taking unnecessary risks. Do some google checks on the company if in doubt.

Not all snorkelers go for beach snorkeling and there are plenty of attractions around the world that are categorized quite reasonably as open ocean. Tours exist for the very purpose of seeing whale sharks in Mexico or the Philipines so not only can you snorkel in the open ocean, it’s often considered the desired location.