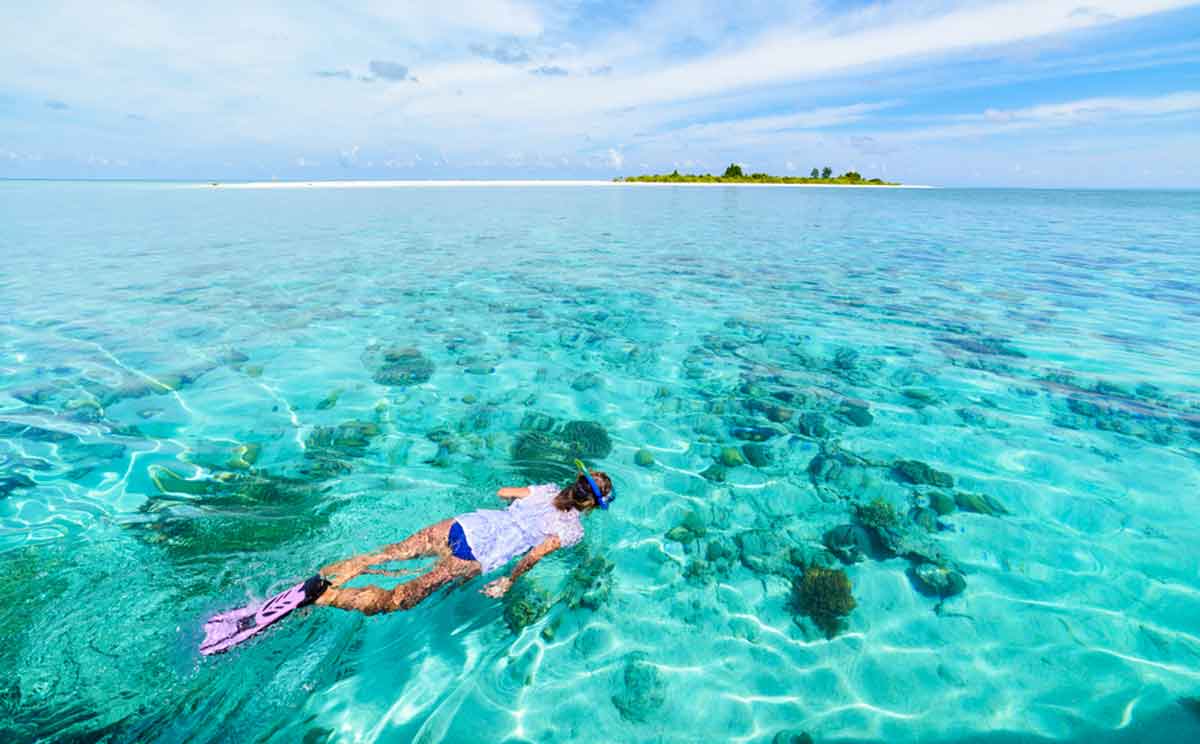 For those that don’t suffer from asthma, it’s an issue you are blessed to be without. For many, it can be debilitating, and for others just an annoyance.

It can affect the participation of many sports, mostly those with some sort of physical exertion, as asthma affects the ability to breathe unrestricted.

With scuba diving, they do advise medical consultation if you are in any way concerned, but many just want to try snorkeling and wonder if it’s something to worry about, whether it’s for themselves or a fellow family member.

So, can you snorkel if you have asthma?

Asthma sufferers do go snorkeling but it’s best to take precautions. If asthma is triggered by allergens then you should be fine to go snorkeling. If physical activity brings on an asthma attack, then try the equipment before you go, keep the inhaler waterproof and safe, as well as staying to shallower water with friends.

I am in no way going to pretend I am a medical expert, but I do suffer from asthma. It’s not severe and it’s allergen related, so if I am not near the effecting pollen then I don’t get it.

In preparation for writing this article, I read through an absolute tonne of forum noticeboards to get a flavor for the problem as well, but I don’t consider that a replacement for medical advice, just a reflection of people’s experiences dealing with the problem.

I’m going to prequalify any advice here by suggesting you go and see a doctor and ask the same question if you are at all worried.

I found this surprising, but according to the Center for Disease Control (CDC), 1 in 13 people have some form of asthma.

Perhaps, more surprisingly, according to Healthline, those with severe asthma is 3.6% of the population.

That’s a lot of people.

So, asthma is a common condition of the lungs that manifests with breathing difficulties.

As it stands at the moment there is no cure but is managed with suppression of the symptoms. Asthma causes swelling in the tubes used for breathing which restricts the ability to intake air.

While it can manifest randomly, asthma typically has a trigger that can include;

You can see why those entertaining the idea of snorkeling might be concerned about trying it. There looks like a few potential triggers in there.

I’ve read of a few studies that also connect asthma to psychological problems such as claustrophobia. It seems reasonable to ask whether a beginner to snorkeling suffering from claustrophobia would suffer an asthma attack.

Could Snorkeling Trigger An Asthma Attack

Anyone suffering from asthma might reasonably have some hesitation and trepidation before trying out snorkeling.

While smoke may be unlikely on the water, snorkeling may well come across the triggers for their asthma with physical exertion, saltwater mist, cold water, or any claustrophobic effect when they place their head into the water.

There’s plenty of natural stimuli to trigger an attack if you are particularly susceptible.

A snorkel will naturally restrict breathing, not too much, but if you get asthma from physical exertion, then the natural resistance of the water and diving could lead to ana track if pushed.

The good news is that you can always stop, and just stand up at any time, should that alleviate the problem for you.

Is Snorkeling With Asthma Dangerous?

So, while snorkeling could be a potential cause, the relevant question might be whether the problem is probable, and if so, is it serious enough to warrant being called dangerous.

From personal experience, and reading around I’d say, not really. That said, it does seem prudent to take natural precautions.

Every asthma sufferer will understand their triggers, their susceptibility, severity, and can take appropriate preventative action.

It’s worth noting exactly why an asthma attack and snorkeling might be dangerous.

When an asthma attack occurs the passage of air becomes restricted as the airway swells. Whatever has triggered the attack cases a panic because the lungs have to work extremely hard to inhale and exhale.

If you try to imagine that snorkeling, then the reason for caution becomes clear. A snorkeler already has a restricted breathing tube to the snorkel tube, or they may be underwater. They may be far from their inhaler, in an environment where they are quite literally, out of their depth.

Additionally, water has a greater density than air. The lungs are working against greater resistance.

There’s no really clear answer to whether snorkeling for asthma sufferers is dangerous. There are many factors, not least of which is the severity of the symptoms you will likely experience. If your asthma is mild then there shouldn’t be any issues.

If it isn’t then consider taking all precautions before embarking on a snorkeling trip.

When assessing risk it should always be probability and severity, coupled with whether the problem can be solved easily.

Tips For Snorkeling With Asthma

Like a lot of things in life, if you have asthma then going snorkeling doesn’t need to be a barrier, but more of a combination of education, experience, and preparation.

If you plan properly, communicate well to those around you, then there is no reason why snorkeling should be prohibitive to you.

It shouldn’t be something you are afraid to try.

An asthma sufferer is in good physical health, is confident in the water, and has prepared properly then there’s no reason they can’t snorkel.

There is probably a difference between what types of trigger stimuli though;

Allergen triggers – asthma attacks that are triggered by a reaction to dust mites, pollen, or cat furs have less to fear, as the stimuli that give rise to the condition are absent. The risk of attack appears to be minimal.

Physical triggers – If the asthma attack is more likely to be triggered by physical exertion, then obviously that has more likelihood of occurring. There is a natural physical element to snorkeling, but it can also be quite relaxing, rather than exerting. There’s no reason you can’t regulate the physical nature of your activity to suit your needs.

For those who are more afflicted by asthma attacks under physical exertion then it’s perhaps wise to practice breathing through the snorkel before you get into the water. Purchasing the gear beforehand and simulating the experience can go a long way to feeling comfortable using the equipment.

Other things to consider are;

Waterproof the inhaler – Take a few inhalers, and waterproof them. Waterproof dry bags can be purchased quite cheaply, and these will keep an inhaler dry even if submersed in water.

Stay with a buddy – Don’t venture out alone. As snorkeling is done is some of the world’s most stunning locations it can get quite distracting, along with the nature visible beneath the surface. If it’s your first trip, make sure you are near someone and make sure they know your problem.

Inform boat crew – A lot of snorkeling is done from a beach, but many areas need a boat trip to get to. They will have taken asthma sufferers before, so make sure they no and ask them to keep an eye on you.

Go slowly – Take it slowly. It’s not a physical sport in a tough sense, but taking it slowly seems prudent.

Consider a snorkel vest – A snorkeling vest is a small flotation device that will permanently keep you above water if you’re worried. They can be cumbersome, and a bit annoying if you are more confident, but they will help keep you stress free if you are worried.

Shorter snorkel tubes – You can take this too far and make it ineffective, but a shorter tube will be easier to breathe through than a longer one.

In the mid 2000s, a company called MediDive introduced a snorkel that had an inhaler attachment so that a diver can use the ventilator underwater.

It doesn’t seem prominent, but I did find a few places online that are still selling them.

I’ve never used it but it is something to investigate.

It’s probably prudent to end on the reminder that should any of this concern you, please get the consent of your doctor, and follow their advice.

Perhaps the important point is to not be overly cautious. A good sea breeze while snorkeling will keep allergen based asthma attacks at bay.

Asthma sufferers are at a higher risk, but that risk can be mitigated and controlled to the point that it might not even be an issue.

Taking a wander around the forum boards, many posts say they go snorkeling, take precautions, and it isn’t a major problem.

Every individual should balance their own risk before determining whether to take a snorkeling trip. If you’re in good physical shape and healthy then snorkeling shouldn’t present all but the most severely afflicted from having a go.

If you’ve never snorkeled before, are considering it, but wondering if asthma is prohibitive then I’d say take precautions, but don’t let your desire be dampened by fear.

Most deal with it perfectly satisfactorily. Keep an inhaler nearby, try on a mask and snorkel before you go, stay close to friends, and stay in shallow water will not only limit the risk but provide you the confidence to continue.