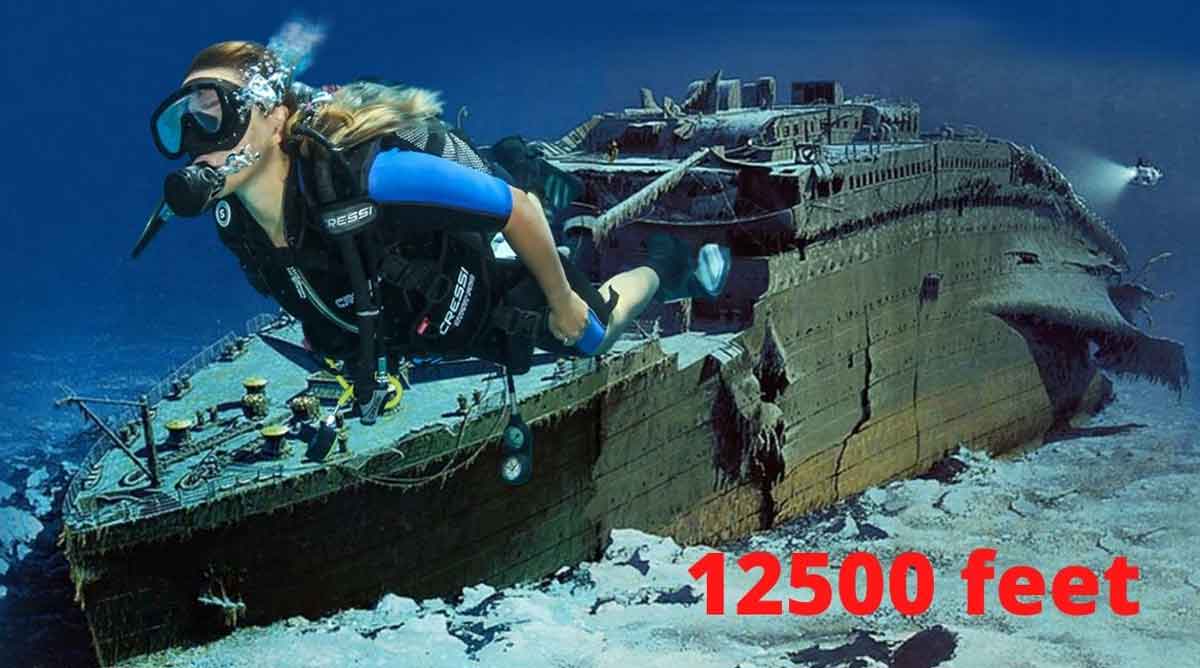 Some events in human history just stick with us through the ages. Momentous events like landing on the moon or the first pictures of the galaxy are milestones in human achievement.

As well as the things we aspire to, other things, like disasters, also seem to stick with us. There’s no bigger disaster story than what happened to the Titanic on the night of the 14th to 15th April 1912.

Scuba diving professionals and recreational divers all like a wreck to dive and explore. It’s an interesting exploration that few humans get to accomplish, which adds to its allure.

So, can you scuba dive to the Titanic?

No, you cannot scuba dive to the Titanic. The Titanic lies in 12,500 feet of ice cold Atlantic ocean and the maximum depth a human can scuba dive is between 400 to 1000 feet because of water pressure. The increasing water pressure also restricts blood flow by constricting tissue. It takes a submersible 150 minutes to get to the required depth so even assuming a human could survive the crushing pressure it’s not possible to take the required amount of breathable oxygen.

As you might imagine, it’s quite a tricky thing to contemplate. The Titanic is not in an ideal location and getting there comes with many challenges.

An Overview Of The Titanic Location And Depth

It took 14,000 men to build the Titanic in two years and 2 months. At the time it was designed as the largest passenger ship in the world, and built by Harland and Wolff in Belfast, Northern Ireland.

Five days into its maiden voyage, at 11.40 pm on the night of 14th April 1912 it famously struck an iceberg in the North Atlantic, two days before it was due to dock in New York.

It took a total of 2 hours and 40 minutes to fully submerge with 5 of the 6 front watertight compartments flooding within the first hour.

More than 1500 people died that night, and despite the worldwide coverage of the event, the exact location of the Titanic’s resting place was a mystery until 1985.

The water in that area of the Atlantic is around 3800m in depth.

Tragically, three hours after disaster struck, the maiden voyage of the Titanic turned into a watery tombstone for thousands.

Following a top-secret mission to discover the wrecks of the USS Scorpion and the USS Thresher, two sunken submarines, the discoverer of the Titanic was Robert Ballard, on the 1st September 1985.

The Titanic lay 370 miles off the coast of Newfoundland in two separate pieces around 600m apart with a trail of debris between the two sections.

Its precise location is now known and it lays in 12,500 feet of ice-cold water.

What’s The Maximum Depth You Can Scuba Dive To?

While most take up scuba diving to ‘explore the depths’ the truth is is in terms of ocean depth, the water is rather shallow.

An open water certification qualifies you to go to around 60 feet in depth, and there’s a good reason for this.

As it’s the first qualification then only basic skills and fitness can be tested, and the depth is quantified for safety contingent with the level of experience.

Water pressure increases the further you dive. At the surface, the pressure is 1 atmosphere, but as you descend every 33 feet the pressure will increase by an additional atmosphere. Thus at 66 feet depth, the limit for open water certification, there is 3 atmospheres pressure on the diver.

This pressure increases the further you dive down to coincide with the increasing water column above them.

A diver breathes air by expanding the lungs against this pressure. Beyond a few hundred feet this becomes increasingly difficult.

Pressure exerts itself on all tissues in the human body and constricts the blood flow.

While depth gives additional challenges, namely light, sea creatures, and the problem of getting breathable oxygen at depth, the water pressure increases to the point where it becomes impossible to survive.

Professional divers can go to 400 feet and that is 12 atmospheres of pressure that the lungs have to work against.

So how far can a human go down in a water column?

This isn’t an easy question to answer as it can depend upon the physical strength of a diver and for many, it might be a one way trip. It’s not unknown for deep divers to come back up coughing up blood, so there isn’t a really practical limit.

Somewhere between 400 ft and 1000 feet seems like an educated guess.

It’s not defined adequately because there aren’t too many volunteers to be crushed to death for the name of science.

Scuba Diving To The Titanic – An Unrealistic Dream

Physical pressures aside, getting to the Titanic presents many challenges. The location is in a harsh environment for starters.

Scuba uses compressed air technology for normal users and this has a practical limit of around 130 feet if you are just using air.

To cope with the increasing depth a professional diver can get to around 400 to 500 feet with the proper equipment and training, along with the differing air mixes.

People have worked in specialized areas at around 1000 feet but that is far from common.

As the Titanic has 12,500 feet of Atlantic ocean above it it is around 12x further down than we as humans can survive.

It’s simply impossible for a human to visit the Titanic without submersibles.

A scuba tank lasts about 45 minutes to an hour in shallow water, but as you increase the depth the tank will provide less breathable oxygen to the diver.

Even if that wasn’t the case it would take 150 minutes to descend to the depth and scuba equipment cannot cope with hours of breathable air including the time taken to reascend and avoid the barotrauma.

Many people think you might be able to launch from a sub to avoid the requirement for carrying air to the depth but the pressure would crush you instantly, so that’s not plausible as an option to scuba dive the Titanic.

Many people assume that the depth might crush your bones as well, but there isn’t any water depth on the planet that would cause that.

The Femur bone will crush at 24,600 psi. Each atmosphere of water pressure is a 14.7 psi increase.

This is 55,224 feet depth of water, which is nearly 17km beneath the surface. The Marianas trench is 36,200 feet so bone crushes at 60% beyond the deepest ocean water on the planet.

Scuba diving to the Titanic is a mixture of impracticalities and impossibilities.

Coping with getting to the location and dealing with the harsh conditions is but a small part of it. The weather is impractical and descent time for carrying breathable air is longer than is technically possible.

The real problem is depth. The Titanic lies in 12,500 feet of water, so even if you could get there, a human could not survive the physical pressure of the water column. It would crush your ability to breathe and restrict blood flow so as to prove fatal.

The only way for a human to see the Titanic in situ is to take a submersible craft to the required location.