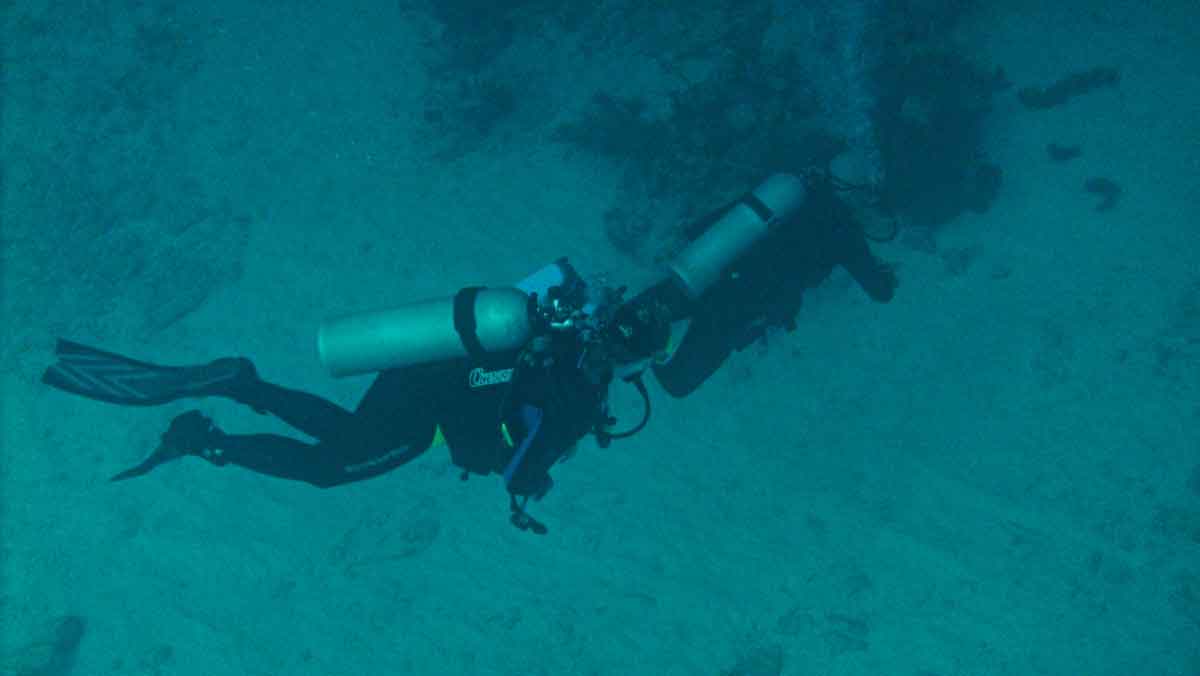 There are many different things that divers consider when planning a dive. These include things such as temperature, depth, and visibility.

In fact, visibility is perhaps one of the most frequent things anticipated by divers when planning a dive.

Many divers dream of warm Caribbean dives with hundred foot plus visibility. This is not surprising as these are great conditions for easily navigating and being able to easily spot wildlife.

However, what if conditions are poor? Can you scuba dive in low visibility?

Yes, you can definitely dive in low visibility situations. In fact, there are many ideal dive destinations that simply have low visibility. However, divers must be prepared for this situation as low visibility brings unique concerns. With proper preparation, any diver can enjoy low visibility dives.

So, what can divers expect from a low visibility environment? Where might they encounter them? What can they do in order to enjoy a low visibility dive? We’ll address these things in this article.

For example, my open water certification occurred in a quarry with lots of sediment. Visibility was only a few feet, making it difficult to see even my dive buddy’s fins two feet in front of me.

However, others may consider low visibility to be 20 feet, particularly if they are used to crystal clear waters. Thus, it is highly variable from person to person.

In short, a low visibility dive could be considered a dive where a diver’s horizontal visibility is less than what they desire.

Low visibility is caused by a number of factors. One aspect is a shift in tides. As tides ebb and flow, a large volume of water shifts. This can cause sediments from the ocean floor to shift, which can cloud up the water.

However, it is not simply the changing of the tides that can cause low visibility. Some areas simply have a large amount of particulates in the water in general.

For example, many freshwater quarries, lakes, and rivers are sediment-heavy.

Wind can also cause decreased visibility fairly rapidly. High winds chop up the surface waters, which reduces the extent to which light can penetrate the water.

This, in turn, reduces visibility. Storms can significantly reduce visibility very quickly, sometimes drastically shifting it even during the course of a dive.

Finally, a factor that affects visibility is current. At the surface, currents can bring in silt and sand from the shore or the shallows.

However, deep currents can disrupt silt on the bottom of the ocean, mixing it with deep waters. Thus, even when conditions are calm on the surface, there is a possibility for low visibility at depth.

There are many situations where divers encounter low visibility dives. In fact, the vast majority of potential diving sites are not in crystal clear waters.

If you are diving somewhere other than tropical waters or the Arctic, you’ll be much more likely to encounter low visibility.

For inland divers, the majority of freshwater sites tend to have low visibility. In fact, finding a site with 30 foot visibility in the Midwestern United States would be something I consider to be impressive.

However, there are even a number of places even in relatively clear waters where divers can encounter low visibility. One of the most common is wreck dives. Even in clear waters, exploring wrecks is by nature dark and difficult to see.

The reality is that there are many low visibility dives where people can encounter impressive things. Shipwrecks are one example. However, low visibility conditions are ripe for seeing wildlife that would not normally be out and about in clear conditions. Many people love night dives because new wildlife can be seen. The same is true for low visibility daytime dives.

How Do You Prepare for a Low Visibility Dive?

Obviously, diving takes a great deal of care and planning. This is even more important during low visibility conditions. These types of dives can be very interesting and enjoyable; however, extra care needs to be taken in order to ensure that they are safe.

In order to prepare for a satisfying low visibility dive in any situation, it is important to understand five major factors, which we will discuss here.

The first critical aspect of a successful low visibility dive is planning. It is always important to plan your dive; however, when visibility is low, this is even more critical.

If you’ve never dove the site before, it is advisable to do research online or talk to people who have experience with it. If you’re diving with a company, the dive master will be able to provide information about what to expect.

By understanding the site, you will have an idea of what to expect in terms of geography. For example, when I dive quarries, I typically expect to navigate a certain direction until I encounter a landmark (i.e. a sunken school bus), then navigate to the next point along the dive.

Having a careful plan ensures an improved diving experience.

The buddy system is perhaps the thing that is most integral to a safe and successful dive experience. This is something that is drilled into students as early as their initial open water training.

After all, your buddy is your lifeline in case of issues such as equipment failure.

While your dive buddy is always important, think about how you go about dives in very clear conditions. You are likely a bit lenient with typical protocols, sometimes drifting a bit away from your buddy. This is not something that can occur in low visibility environments.

In low visibility, you should stay within a few feet from your buddy. This will ensure that you can always see one another and communicate effectively. This may feel a bit odd at first as you may at times bump into one another, but it is required for low visibility dives.

A dive is only good if you have the right equipment. This is particularly true of low visibility dives. So what equipment do you need? There are a number of things that are recommended.

First, let’s consider the coloring of your gear. Black is definitely the norm; however, in low visibility, bright colors are key. If you own your own equipment, this may not be an option. However, if you are renting, you’ll likely have more of a selection.

Favor bright colors that last at a deeper depth such as yellows.

On a number of occasions in very low visibility dives, my buddy’s pink-accented wetsuit or yellow tank were extremely useful for allowing us to keep track of one another.

In addition to color choice, you should carry a light and a backup light. These are very portable and can be secured to your hand with the backup attached to your BCD. Dive lights can greatly improve visibility and ensure that you can accurately read your gauges.

The backup light is important because you never know when your primary may fail. I learned this the hard way once. I was diving a wreck of a 727 when my light battery began to fail in the middle of the hull.

While I still had some light, it was very dim and I ultimately had to navigate by the lights of my buddies.

Another important thing to plan is navigation. In low visibility environments, your compass is your best friend. We typically navigate visually; however, when that is difficult, planning out your dive path at the surface and following it at depth is critical.

When at depth, focusing on major landmarks can help aid in navigation. Like I discussed earlier, this is typically how we navigate in quarries with low visibility.

However, even in the ocean, there are typically major landmarks that stand out visually which can be used for navigation.

If you’re diving a large wreck that has multiple down lines, consider bringing a marker to tie onto the line at depth so that you can ensure to ascend the correct line. Otherwise, you will risk surfacing far away from your boat.

Finally, when navigating in low visibility, it is important to move slowly. You know how driving too fast can lead to problems when driving in a heavy rainstorm?

The same is true for swimming too fast in low visibility diving. Going slowly can also help divers to notice more things, making for an enjoyable dive.

The final aspect is not one that deals with technical aspects but rather your attitude. One thing that can quickly lead to a negative diving experience is letting frustration or disappointment take over.

Don’t get me wrong. It always feels a bit disappointing when conditions turn out to be poor. It is tempting to feel like a great dive has been ruined. However, low visibility diving simply takes a little extra time and effort.

A proper attitude will ensure that you will be more likely to be calm and respond well to issues that arise during the dive. It will also enhance your ability to gain what you came for: enjoyment.

While most divers tend to favor clear waters and high visibility conditions for obvious reasons, low visibility dives can be enjoyable as well. Low visibility is caused by things that disrupt the light being able to reach greater depths such as a rough surface, high sediment content, storms, or strong currents.

In order to have a safe and enjoyable dive in low visibility conditions, divers should carefully plan their dive, understand how to best navigate, equip themselves with the appropriate equipment, keep their buddy close by, and have a positive attitude.