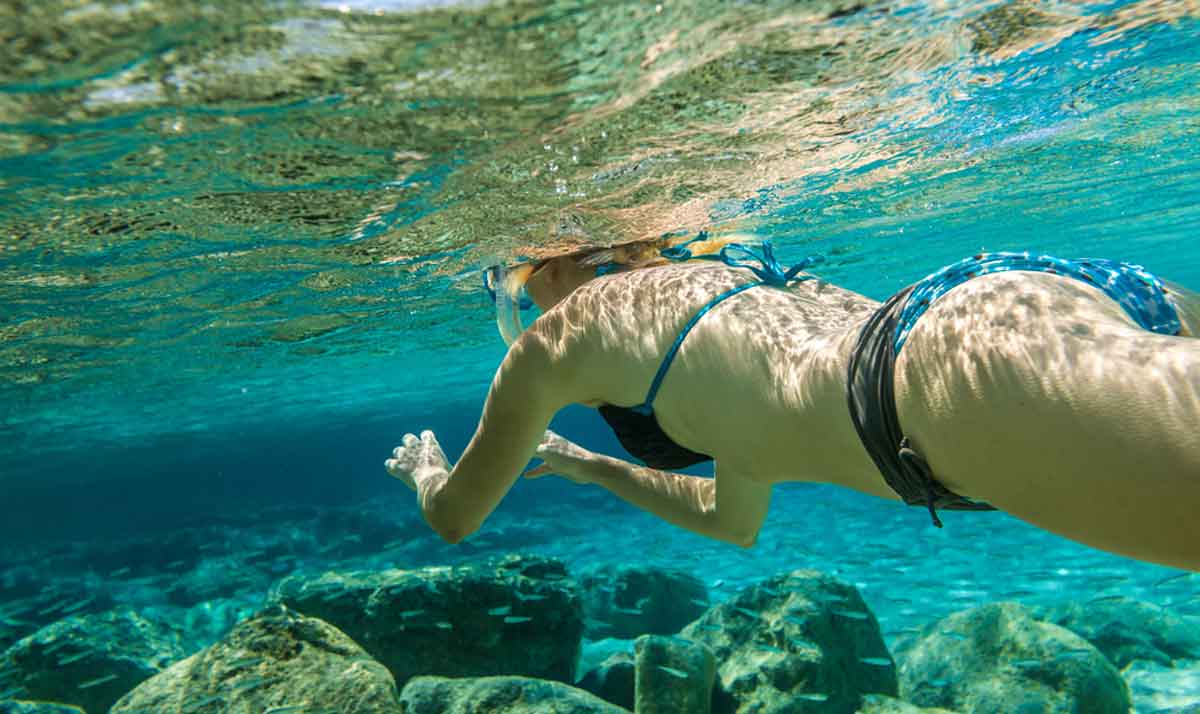 Sports and activities come in various forms. Some are physical and social, and others are solitary and inactive. Snorkeling is a blend of leisurely activity, exercise, and interest.

This interest attracts many to the sport every year. While basketball isn’t considered dangerous, snorkeling can have some inherent dangers. Not because it’s naturally dangerous, in fact, it can be extremely safe and entertaining.

But when you’re dealing with open water, and marine life I think everyone can see why snorkeling on your own might lead some to question whether it’s a good idea.

Sometimes you want to do something and don’t have friends immediately around you. While that immediately stops a game of cards or a match of tennis, it doesn’t prohibit trying some snorkeling.

Many people might want to try snorkeling, and may not have the social circle to do so. So, can you go snorkeling on your own?

Yes, snorkeling can be done on your own but it’s best practice to plan the trip well beforehand. Go somewhere familiar and don’t stray too far from the beach. Go in good weather and be aware of the local currents.

With scuba diving, they positively recommend a dive buddy. While it’s good for socializing, it’s primary reason is safety. Breathing and underwater aren’t words that coalesce with ease. When trouble comes, it’s good to have someone to act as both a lookout and an aid for safety.

This could well be a temperament question. Of course, you can go snorkeling on your own. If you don’t live in a dictatorship there’s no reason you couldn’t go to the most dangerous areas, throw some shark bait in the water, and swim straight into a riptide.

There’s nothing to stop you.

The better questions might be whether it’s a good idea and if you want to how to prepare for the risks?

Is It A Good Idea To Snorkel On Your Own?

We should probably define what we mean by the term ‘on your own’.

It seems simple, but there seems to be two different types of how the term might be used.

The first is when you are remote with no-one around you. If you drove to a deserted island and went snorkeling. You would be on your own. Totally on your own.

The other is like saying you went to the cinema on your own. Yes, you didn’t have people around you you were acquainted with, but there were people around to observe any obvious distress.

So if you go to Hanauma Bay in the tourist season at peak times, you could go on your own but there’d be a few thousand people that might be with you locally.

That’s two different types of ‘on your own’.

While technically they are both ‘on their own’ they represent very different scenarios, and that requires a different kind of approach.

The Risks Of Snorkeling On Your Own?

While snorkeling attracts many to give it a go, the fact is that it does come with risks. They may be small, but they are there.

Some are simple to calculate while others perhaps require some knowledge of how water or equipment works. It’s not a fair world, and knowledge dispels fear so adequately assessing risks allows the snorkeler to calculate their decisions.

So what are the risks associated with snorkeling on your own?

Riptides or rip currents – when bodies of water move so does everything caught in them. You cannot swim against these water movements so it’s imperative to know where the currents are, and when the riptides are strongest. If the water is unfamiliar to you, or in an area that is likely to cause these current movements, then it’s better you not snorkel alone.

Injury – physical Injuries in any sport isn’t a great result, but with snorkeling, it has a more deadly tone. The most typical injury might be cramps but cuts, and sprains are also a risk while in a current.

It doesn’t even have to happen in the water, imagine doing something simple as slipping on a rock.

Marine life – while the risk of sharks is minimal, bites and cuts from fish and corals, as well as lionfish and jellyfish need to be addressed. Getting stung can bring panic and stress, so it’s better if you have a buddy to also keep an eye out for danger.

Exhaustion – snorkeling can take it out on you. It’s physical in nature and depending upon your level of fitness, it can become exhausting quickly. That’s fine if you are near the beach but not quite so easy to get out of further away.

Unpredictable – The fact is that you are dealing with the water. Certain eventualities can be foreseen, sunburn, and driving for example, but others can’t. Who knows when a bit of fear can cause you to panic, or a gash down the leg near rocks.

Or something as simple as getting lost in unfamiliar terrain. The fact is that the more you have a propensity to go snorkeling on your own, the more you should surround yourself with the familiar.

What To Do If You Want To Go On Your Own

Despite there being risks, it’s important not to let fear rule you.

As alluded to earlier, ‘on your own’ doesn’t necessarily mean without anyone present. Thus a lot of the risks are eliminated. Cramps might be awkward if you are a bad swimmer and get them if you are truly alone, but if there are people near you, they will almost certainly see the distress.

The other fact is that you can often prepare adequately to minimize those risks. Keeping yourself well hydrated with electrolytes can keep cramps at bay.

Risks are just that, risks. They are not definites, and with proper planning, you can adequately mitigate them.

So what are those risks, and how might you assess the risk to yourself if you want to go snorkeling alone.

Swimming ability – assess how good a swimmer you are. Try not to over evaluate yourself, but if you are confident in the water then going alone becomes easier.

Tell someone – make sure at least someone knows what you’re doing. Even if it’s just a text message let someone know. That way if you don’t check in later, someone at least knows you should have done.

Weather – a quick weather check before you go so you can make sure that the weather is not going to turn on you while you are snorkeling.

Familiarity – probably not the best time to go snorkeling trying new locations. Try going somewhere you are at least familiar with. When you aren’t familiar with an area, there’s more to go wrong.

This especially refers to knowledge of rip currents or riptides.

Hi visibility – try to make yourself as highly visible as possible. Time to break out that lime green rash guard.

Flotation device – consider a hi-vis snorkel vest if you’re not a competent swimmer. At least this should aid buoyancy.

Beach snorkeling – if you are going alone the best thing you can do is mitigate a lot of the risk about being in open water. Problems near the shore mean that you are not far from land, and with any difficulty often you can just stand up.

It’s also more likely you might be seen by passers-by, than if you were miles away into the ocean.

Attitude – best to check the bravado when you go out snorkeling alone. The more you try to overreach what you’re doing the more at risk you are. I’ve lost count of the number of times the water has surprised me, so while keeping calm, don’t push your luck.

This might include where to hide items if you need to if it’s a place where you’d go snorkeling in a natural location rather than a tourist spot.

Snorkeling isn’t that dangerous whether you go snorkeling alone or whether it’s part of a group. With friends or in a popular area limits those risks, as well as increasing the likelihood of a lifeguard being on duty. Lifeguards that have easy access to rescue boats.

The more of a beginner you are, combined with an unprepared trip to a remote area the more you increase the risk of something going wrong.

Nobody likes things going wrong, and that’s especially true when you add water into the equation. Have fun by all means, but NEVER take the sea as a complacent entity. When it turns on you, it turns on you. No amount of complaining helps at that moment.

That said, you can mitigate the risks and still have fun. It’s all about sensible planning and confidence.

Don’t go snorkeling alone if it’s the first time you’ve done it. If you don’t have anyone to snorkel with, join a group or try it at a popular beach first.

Getting comfortable with risk is just a matter of patience, practice, and proper planning.