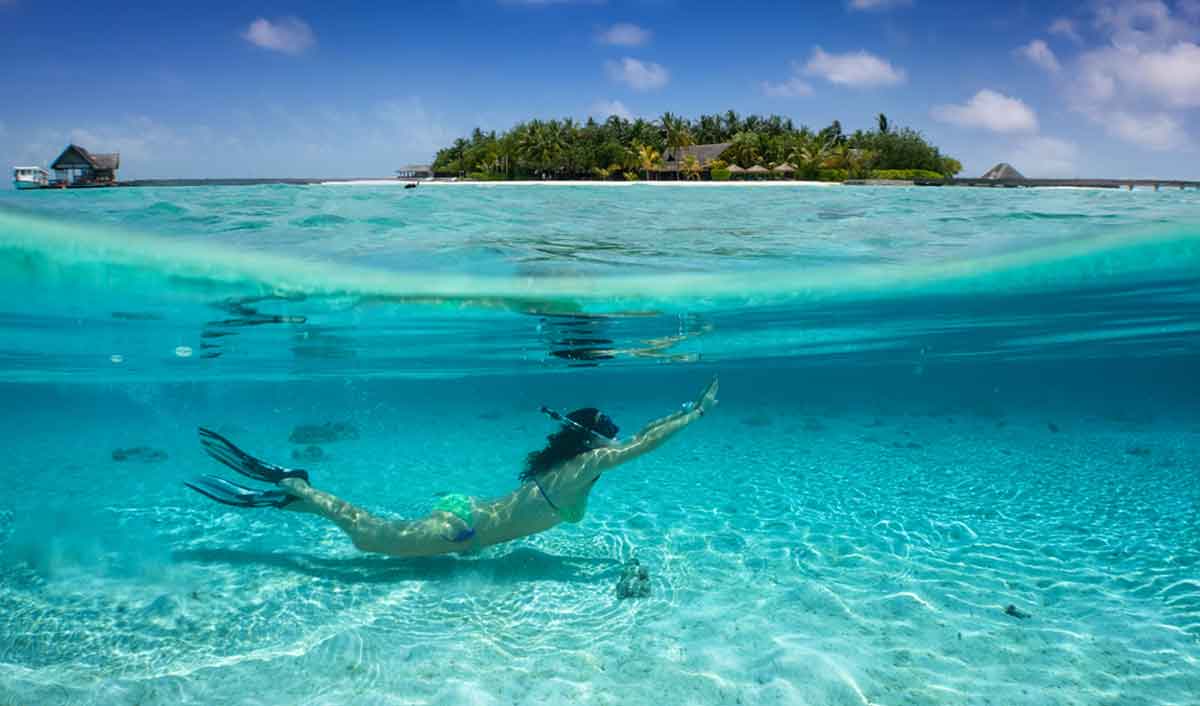 Even if you have never snorkeled before you will still have heard of the bends. There are plenty of Hollywood movies that mention it.

Most people, while not knowing what it is, nor what actually happens can give you a rough scenario that it is a condition related to returning to the surface of the water from being underneath the waves.

So, if you are snorkeling, what are the bends?’, and can you get the bends from snorkeling?

No, you cannot get the bends from snorkeling. The bends is a condition whereby a diver breathes in compressed air at depth and ascends as the pressure decreases. It requires a nitrogen build up in the body tissues, and an ascent from a reasonable depth. Snorkelers do not take underwater breathes and the water depths are far too shallow, as well as there is not enough time for nitrogen build up.

There can always be extenuating circumstances, like a propensity for nitrogen build up but as a rule snorkelers are not in danger.

What Are The Bends?

The bends is the common euphemism for what is technically called either decompression sickness, or barotrauma (Baro meaning related to pressure).

The bends are the condition that arises when there is a rapid decrease in the pressure around you, so it can happen in either air or water.

It’s most commonly associated with scuba divers ascending from the depths.

A diver breathing underwater is taking breaths of compressed air. With the increased pressure of going deeper underwater, the further down you dive the more air particles you take in.

Although the human body relies on oxygen, the composition of air is 21% oxygen, but 78% nitrogen.

Thus, the deeper you dive the more nitrogen particles the body absorbs. On land your body doesn’t do a lot with nitrogen, but as pressure increases with depth, that nitrogen will be absorbed into body tissues.

A long, deep dive will store nitrogen in the body tissues that have a tendency to release as the pressure lowers.

That’s why if you shake and puncture it, you get the spray of soda effect.

If you open a bottle very, very slowly the pressure release is slow and the reaction is far less severe. That analogy, that of opening a bottle slowly, is similar to a scuba diver ascending slowly to alleviate the condition.

As a diver comes from the sea depths at pressure (decompressing), and moves towards atmospheric pressure at the surface, those nitrogen molecules will leave the body tissue.

A diver will breath deeply as he slowly ascends so that as the pressure decreases the nitrogen will slowly leave the body.

Should the diver ascend too quickly, the nitrogen has not had time to escape, and nitrogen bubbles form in the body joints and tissues.

Why Is ‘The Bends’ Dangerous?

The precursor situation to the bends is naturally fine. A diver is getting an increased amount of nitrogen into their body tissue, but it’s not dangerous.

The same is the case with an unopened soda can. It’s perfectly stable normally in that state.

The danger comes from a rapid release of pressure, either the diver ascending too quickly, or the soda can being opened quickly.

As the water pressure lowers on ascent the nitrogen bubbles come out and form gas bubbles within the body. As well as being painful, they are dangerous.

The gas bubbles were formed at the greater pressure of depth, and expand as you ascend into the lower pressure.

The body will naturally expel the excess gas, but it can only do it at a certain rate. If you ascend slowly the body has time, too quickly and it doesn’t.

Those expanding gas bubbles can put bubbles in the blood, as well as body tissue. In a severe case this can be fatal, but frequently it’s just joint pain.

Incidentally, that’s why it’s caused the bends. The pain can be so brutal that a victim will literally be doubled up in agony.

In a soda can the bubbles will form out of the depressurized liquid. With a diver, nitrogen bubbles form in the blood. This can seriously interrupt natural blood flow.

There are a lot of symptoms of the bends, which include, but not limited to.

As you can imagine, it’s not a great thing to contemplate, and divers take a great deal of trouble to avoid it.

It’s not immediate either, which is why scuba divers recommend the last dive 24 hours before the plane takes off.

What Depths Do Snorkelers Go To?

So ‘The Bends’ happens when you ascend to the surface from being underwater.

As you’ve learned, it’s a condition that arises from breathing compressed air at depth.

A snorkeler without diving doesn’t really break the surface so the depth of just snorkeling isn’t relevant.

However, snorkelers often ‘duck dive’ and go beneath the waves, but unless you are technically moving into freediving depths, then it would only be 3 to 4 meters deep on average.

The maximum really for most snorkelers would be a round 5 meters. That’s not to say there aren’t isolated spots here and there where it gets deeper.

Most tropical snorkeling spots aren’t particularly deep, with many coral reefs being barely beneath the surface.

Now, the shallowest known and recorded case of the bends was 3 meters in a study but they were all scuba divers who spent time in the water breathing compressed air.

The fact is that most snorkeling just doesn’t go that deep.

What Would A Snorkeler Have To Do To Get The Bends?

A key component of getting the bends is taking on oxygen from a compressed air cylinder. In theory at least a snorkeler could dive down, and breath off a scuba tank at depth, and resurface quickly, but that’s a very specific condition.

Not to say, unlikely.

The faster you ascend having taken in compressed air, the quicker the water pressure changes around you.

Scuba devotees of recent times recommend an ascent speed of around 9 meters per second, so that speed is safe so that your body can dispel the nitrogen build up, so a snorkeler would have to go faster than that to not decompress correctly.

The main factors that cause the bends are breathing compressed air, depth, time at depth, and rapid ascent.

The reality is snorkelers, and even freedivers don’t have to worry about the bends as they will not be breathing in from a compressed air source. A snorkeler breathes atmospheric air pressure then dives.

Additionally they are not underwater long enough for any build up of nitrogen to take effect.

They also don’t go deep enough. The bends happens because of a rapid ascent from depth where the problem builds up. From the depths a snorkeler will typically get to, there is no risk of serious decreases in pressure.

However, there is a caveat to this, in that if the snorkeler has been scuba diving recently and is already carrying an increased nitrogen load while snorkeling, as the bends can take a while to display itself.

A snorkeler should be able to catch a plane without worrying about the bends, as a scuba diver might.