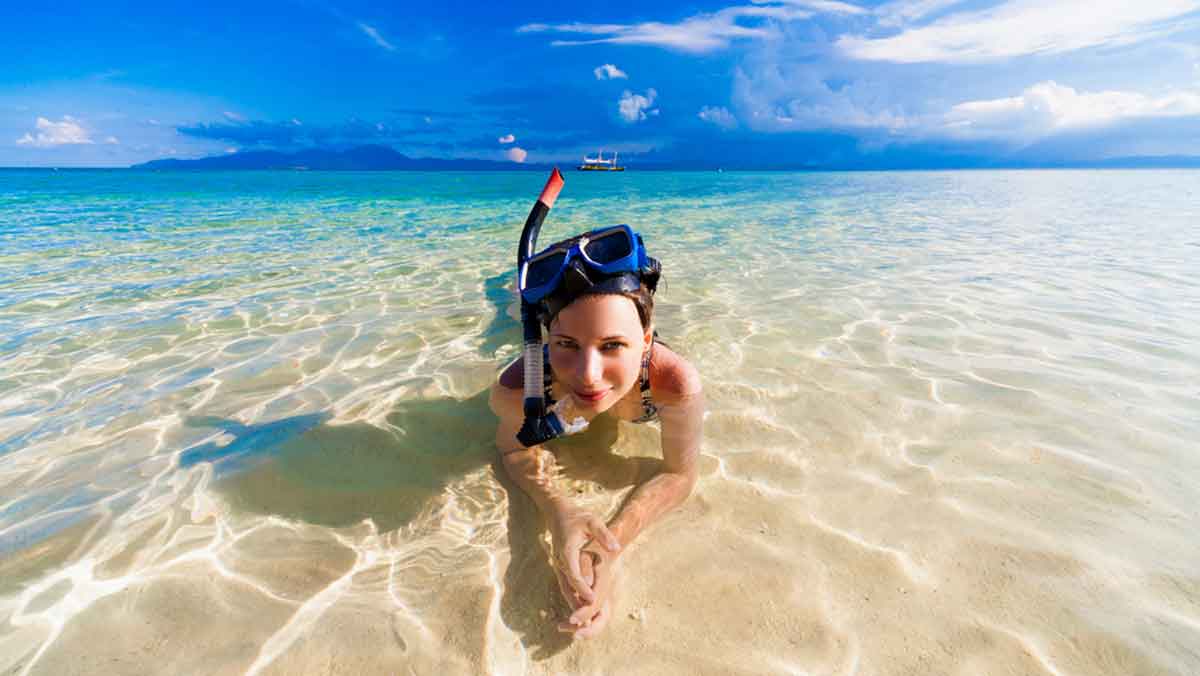 Feeling ill at any time isn’t fun. Feeling nauseous while traveling as you do in a car is annoying as well as not fun.

Feeling ill while you’re meant to be enjoying the experience is a combination of everything as well just plain frustrating.

Snorkeling will take most us to some fantastic places, as well as give us the incredible opportunity to see the natural world.

If you are one of the unfortunate souls who gets a little queasy with boat or ferry travel, or even in a car, you may be wondering what the likelihood is of getting ill if you want to snorkel.

So, can you get seasick while snorkeling?

Yes, it’s entirely possible to be prone to seasickness while snorkeling. The nausea is caused by disorientation perceived by the inner ear with tides and currents, pressure changes, or lack of food and water. Solutions involve earplugs, seasickness tablets, ginger, and allowing adequate digestion, along with proper hydration and avoiding swells.

As it happens I get seasick, but not while snorkeling. On a large boat, it doesn’t happen, but if I haven’t been on a yacht for a while and I spend some time on one, it gets progressively worse for 24 hours. Then it suddenly gets better.

Weird for sure, but that’s what happens to me.

Often just called motion sickness, for those afflicted it can be reasonably common in swimmers, particularly if they undertake open water swimming. From a pool is less likely but it can happen.

Let’s walk through what causes the problem, and more importantly, what can be done to either prevent or mitigate the effects.

What Causes Seasickness While Snorkeling

As it’s known as motion sickness the common denominator to feeling ill is the act of being in motion. While walking doesn’t cause it, traveling in a vehicle does, whether it’s a boat or a car.

The vehicle moves in a way different from the perception of the brain. The inner ear, which perceives balance, gets a different set of inputs from what the eyes are seeing. The brain is confused, it doesn’t understand whether you are moving or not.

The result is you feel unwell. Seasickness is the name given to motion sickness on the water.

Most snorkeling is done in open water, near a beach or land. Ocean currents, tides, and waves cause water movement that your eyes may not perceive readily.

Feeling seasick in the open water is largely a result of this. You are attempting to sight too often (sighting is the process of looking up to get your bearings) and this causes confusion.

Constantly looking around you tends to happen when you are new to snorkeling, both because you are constantly trying to orientate yourself and you are trying to see as much of the aquatic world as possible.

Snorkeling isn’t just a sport based on the surface of the water. There’s an additional component of depth. While the tides and currents may cause inner ear perceptive differences, the inner ear can also detect pressure changes.

A change in pressure can bring about bouts of seasickness.

An exacerbating factor to seasickness could well be adequate food and water intake. Snorkeling against the water and currents requires exertion and can make you more dehydrated than is immediately obvious.

Physical exercise will cause you to sweat but you won’t be aware of it. The natural cleansing effect of being in the water covers up what is happening.

Some people also need a meal to ‘settle’ before any activity is undertaken. Snorkeling very soon after a heavy meal isn’t a good idea for a variety of reasons. The movement inside the stomach of undigested food as your body moves, twist, and inverts can bring on seasickness in a number of people.

Snorkeling can provide a variety of sights around you, from coral to fish, as well as the natural undulating landscape.

So it’s only natural that a snorkeler will be constantly moving their head to experience as much as possible. Sometimes there’s a lot to see.

The motion of excessively moving your head can also induce seasickness. The inner ear gets confused again and sends the required signals to the brain to prevent you from continuing.

Specific to any form of open water swimming or snorkeling, the swells, tides, and currents will force you to deal with the issue.

Like any motion sickness, the immediate cure is to stop the motion and orientate yourself. If you can stand up, and fix your eyes on the horizon, that will assist greatly, making sure your ears are free from water.

If you are finning around in the open water, where that isn’t possible, and start to feel nauseous the best thing to do is immediately fix your eyes on a location in front of you.

The act of stabilizing your head and giving your brain something to concentrate on naturally orientates the brain, and may cure the nausea. If it doesn’t, head towards the land, so you can recover.

It’s best to fix your eyes on something that isn’t also moving, like fish, or another snorkeler. The idea is to pick something fixed so the brain works out what’s happening. A lot of people can also just distract the brain with thinking, even about something banal.

In fact, this might be a good reason why people who do suffer motion sickness don’t get it while snorkeling. The aquatic environment is filled with interesting things to see, which makes the brain ‘forget’.

While fixing your eyes on a location may well work, the best way to avoid a problem, is to give yourself the best possible chance of avoiding it, by preparing intelligently for it.

The army has a saying, known as the 7 P’s – prior planning and preparation prevents piss poor performance.

Some humor there, but it makes the point adequately. Preventing something is superior to having an effective cure.

With that here are some tips that stop motion sickness in general, but some are good for snorkeling in particular.

Avoid – Any alcohol at all. Alcohol can make people ill anyway, let alone add the rolling swells of snorkeling. Also make sure you don’t eat the thing you know will disagree with you, or new foods that might, depending upon how important the snorkeling is to you.

Adequate digestion – Before you go snorkeling allow 2 or 3 for the digestion of any food. A full stomach and the inversion of a duck dive can cause that nauseous feeling. Keep hydrated, but don’t overfill on water, as it may produce the same effect.

Antihistamines – There’s evidence, anecdotally, that antihistamines (allergy prevention) can prevent seasickness. However, they can also cause drowsiness, so there are pros and cons to this method.

Earplugs – Any form of motion sickness has a cause in inner ear imbalances. If it’s caused by different pressures, then mitigating that effect may stop the seasickness. Wearing earplugs can help with this in a lot of people.

Shallow water – Shallow water can help with unease and the brain can find itself with fewer issues of orientation. It’s also easier to stand up and take away any of the causes for motion sickness.

Wristbands – A wristband works on the acupressure principle, and there are specific brands for swimmers, so you can try this and see if it works for you.

Avoid bad water – Ask a lifeguard and use your common sense. The lifeguard can tell you where the tides and currents are, and avoid large swells and waves that cause the motion. There might be a period of slack water where the sea isn’t particularly moving at all.

Ginger – Try something with ginger in it. Several studies have linked ginger to having an effect with respect to seasickness. So ginger supplements, ginger tea, or ginger biscuits. Take some ginger cookies to snack on.

Focusing – This is an attitude really, but if you go snorkeling with the attitude of keeping your head movement to a minimum, and thinking about what you are experiencing can take away the effects of motion sickness. The truth of this one is to make sure you have fun. Having fun makes you forget about the issue, which in and of itself will help.

Seasickness tablets – If all else fails, might be an idea to take specific seasickness tablets. Many brands are pharmaceutically active in trying to prevent the problem. Take a few with you if nothing else seems to work.

If you don’t have an issue with forms of motion sickness then you’re lucky. Feeling ill while you are trying to enjoy a recreational activity isn’t great. You may have taken a plane or cruised to some of the most desirable locations and can’t fully experience its wonders.

Seasickness is likely caused by imbalances in the inner ear caused by pressure changes, or the discrepancy of witnessing a different movement than your ears are silently telling you about your balance. The confusion makes you ill.

Preventing the problem is a personal issue, there is no ‘one size fits all’ approach. Many causes aren’t replicable either so it may be fine the next time you go, maybe because the swell isn’t as great.

Learning how you personally react is the key to defeating the problem. Snorkeling is a fantastic activity, with some of the most amazing views available in the modern world.

Anything from adequate prevention to ginger, tablets, or earplugs may work for you. If it does then I’m happy for you.

Enjoy your time in the water, nausea free.