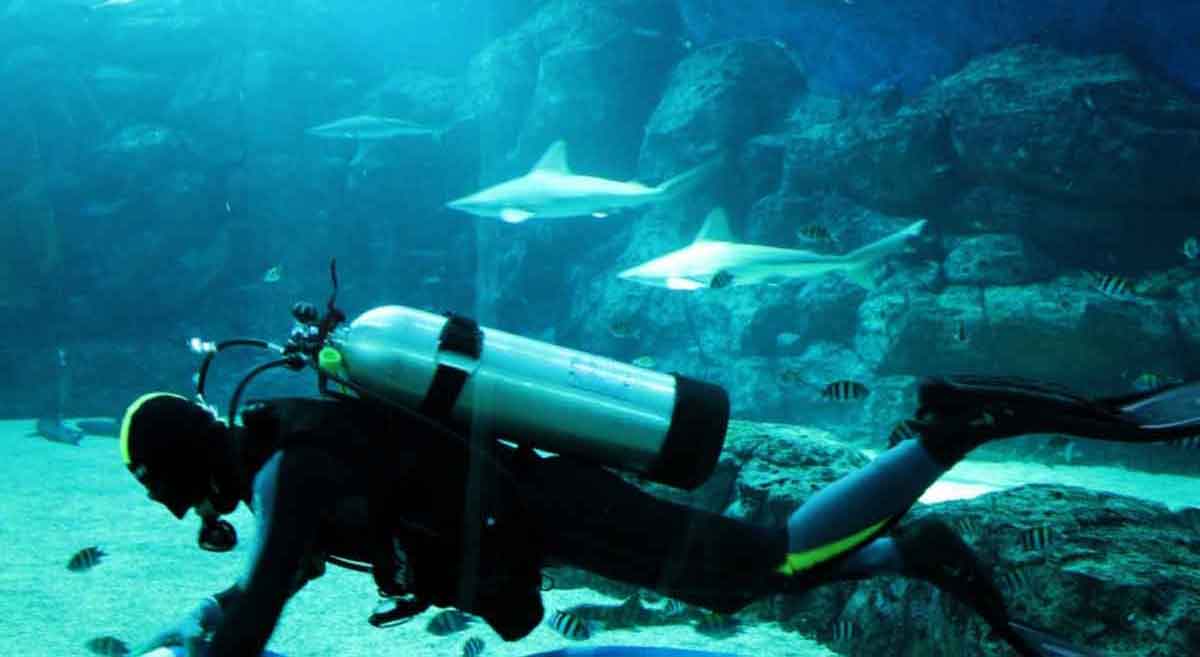 Everyone has seen Jaws so we know they can, as very little is impervious to a 30.06 round fired from an M1 Garand rifle.

For those aware of the physics of compressed air the thought can be alarming. It’s not entirely unwarranted either. It certainly isn’t common but occasionally people have died from a scuba tank exploding.

So, are you carry a small timebomb on your back, can scuba tanks explode?

Scuba tanks will not explode in general use if they are well maintained and have been given a hydrostatic pressure test and are currently within guidelines. Scuba tanks are tested to 5/3 or 3/2 of the working pressure so overpressure is not a great risk. Other risks include exposure to heat, valve failure, and puncture.

There’s no doubt it’s an unnerving thought, the highly pressurized container being unstable and exploding, but the truth is it isn’t particularly risky.

Every scuba tank has a pressure rating and are tested up to 1.5 times (5/3 or 3/2 of the working pressure) the stated pressure as part of the test. For example, a 200 bar tank will be tested to 300 bar.

Scuba tanks are regularly subjected to a hydrostatic test which over pressures the tank within these parameters. Failure can be for any number of reasons but observable integrity loss, dents, pitting, corrosion, bulges, and thread damage all qualify in rejection of a tank on safety grounds.

Dangers To A Scuba Tank Exploding

Realistically speaking and freak metal stress notwithstanding, there are only a few causes of loss of integrity to a scuba tank.

Steel is highly durable and tough as well as ductile. Many scuba tanks are made of steel. However, steel is not corrosive resistant so remains susceptible to neglect. Aluminium doesn’t corrode, but it doesn’t have the structural integrity that steel does, so there are pros and cons to each choice.

Another key point is that compressed air is exactly that, air. The tank does not contain combustible gases, so is not the danger that a hydrogen tank would be for example.

If you are worried by an explosive tank, pick steel but take care of it.

Any form of puncture will cause loss of integrity in the steel or aluminium. A deformation will also cause a similar loss. Puncturing the steel container causes a rapid lowering of pressure.

Puncturing can be caused by external causes, like bullets, but potentially by dropping on sharp edges. Scuba tanks should be handled carefully at all times, and well strapped down on a boat.

As every scuba tank is basically a container for pressurized air, by definition there comes a point where you can force enough air into the tank that the internal pressure cannot be contained by  the tank.

At that point you will get a violent explosion.

Obviously this danger is only present when you are filling the tank, but it’s also an advert for allowing people skilled in tank filling to do it. They have the safety equipment.

While heat is great in terms of holiday destinations, localized heat produces an interesting effect.

With heat, molecules move faster as they have an external source of energy. The air in your pressurized scuba tank subjected to a heat source will slowly increase the internal pressure. As the pressure increases the same effect as overpressure happens.

Unless you are a killer shark gliding around the waters around Amity, the most likely cause of a scuba tank failure and explosion is a faulty or broken valve.

This is as likely to happen with an aluminium tank as with a steel tank.

The tank valve is considered the most likely point of failure in a scuba tank. The tank valve is the equipment that allows for the highly pressurized air inside the tank to be delivered to the diver at acceptable breathing rates.

A defective valve compromises its ability to safely control the release of pressurized air. They are often caused by impact by either dropping or not carefully controlling a tank.

The potential danger of an explosion comes from the increased risk of the valve being unable to provide a controlled release of air. The air release becomes uncontrollable, and thus explosive.

Although aluminium tanks are impervious to water corrosion, steel tanks are not.

When filling a tank, a good reputable business will air blast the valve to get rid of water and contaminants. Doing this prevents water entering the internals of the tank that will cause corrosion.

It can happen incrementally, but over time the water within will weaken the metal and produce a point of failure. Significant failure will cause the tank to explode when filling at a lower pressure than the stated pressure.

Will Scuba Tanks Explode Due To Depth Pressure?

The correct term may be implode.

As a diver goes further beneath the surface the water pressure increases which ironically decreases pressure on the tank. The difference between the internal and external pressure is diminishing.

As a diver does deeper there is little danger of a scuba tank exploding unless there is significant shock or a faulty valve.

At the depth that is attainable to humans the scuba tank is more than capable of resisting the increasing depth pressures.

At around 2200m the depth pressure is 215 bar so about equivalent to the internal pressure of the tank, and that is far beyond the depths a human can safely dive to.

Scuba diving is by nature a sport with some inherent risks managed by controlled environments and systems. Of all the risks that might be likely an explosive scuba tank is infinitesimally small.

It’s not that they don’t happen, it’s just that the systems and procedures to stop it are functioning fine.

Any business that rents or sells scuba tanks will check and regularly assess the functionality of a tank to make sure it passes stringent safety requirements.

This is more necessary for scuba equipment than most because of not only the robust environment a scuba tank finds itself in, and the corrosive elements of water.

The biggest risk to a scuba tank is the rapid release of the pressurized air contained within. It’s not technically an explosion although the effect can be deadly. The more reasonable hazards to a scuba tank are sharp and severe impact, or corrosion of the steel tank.

So, yes, a scuba tank can explode, but not in the traditional sense as there is no combustion.

One thought on “Can Scuba Tanks Explode?”