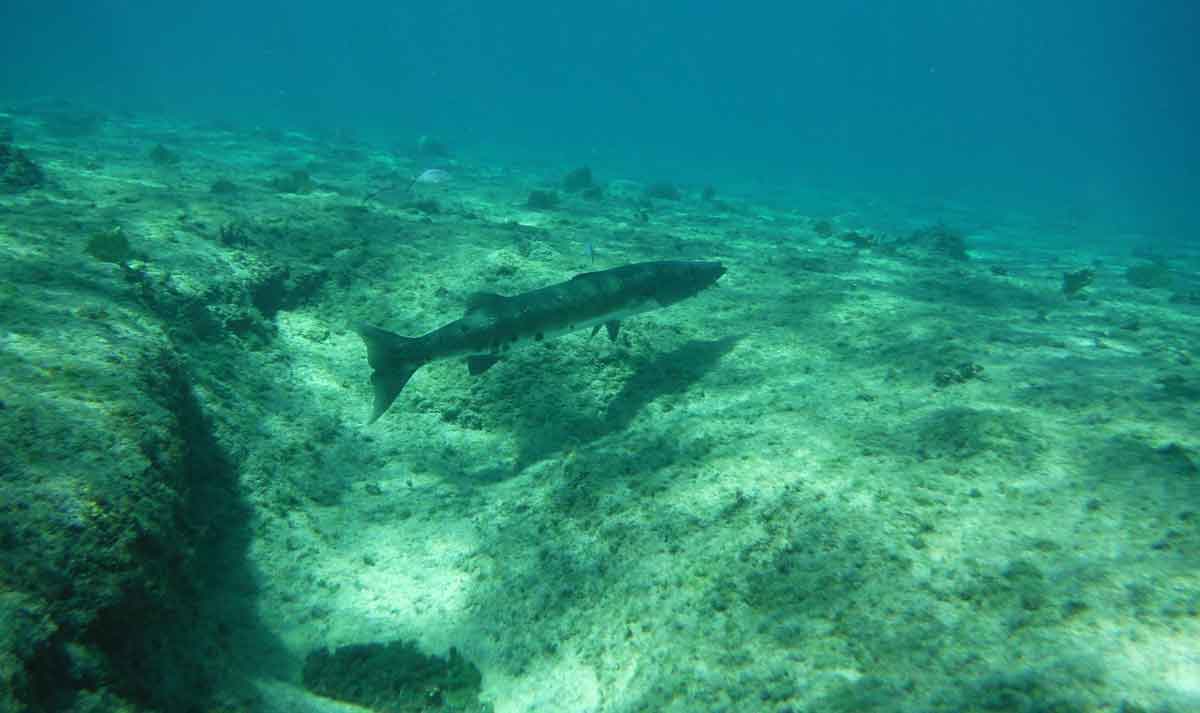 Snorkeling always appears idyllic, even to those who haven’t given the sport a go. Those paradise beaches no doubt have a lot to do with it.

Many things naturally counteract the want to try it. Not everybody likes watersport, and prefer relaxing on holiday. For others, it’s a lack of confidence in themselves and their swimming ability.

One thing that people are hesitant about is the marine life, specifically the less than friendly marine life. Everyone lies the colorful harmless fish that skit about, but eels, sharks, aggressive fish give pause or concern.

One such fish that people fear is the Barracuda. They are synonymous with tropical snorkeling destinations and inhabit many of the most famous snorkeling areas in the world.

But are Barracuda dangerous to those who wish to go snorkeling?

Barracuda are not particularly dangerous to the snorkeler. Despite swimming in the same waters they are a scavenger fish and rarely attack humans. You should remain calm, wear non reflective items, and swim smoothly in waters containing them.

I preface all this by saying I am not a Barracuda expert. I’ve seen one but that’s about it. Snorkelers I’ve met don’t seem to worry about them a great deal, but this article comes from a research point of view more than anything else.

The thing I’ve learned is that they rarely attack humans, which seems surprising to most. At least it was to me.

Rarely attacking is different from harmless though, so let’s walk through what Barracuda are, what triggers them, and some tips to avoiding their more aggressive qualities.

What Is A Barracuda?

There are 28 recognized genus of Barracuda. They are a torpedo-like ray-finned predator and scavenger that swim in both tropical and subtropical waters.

Instantly recognizable, they attack by relying on speed and a powerful bite to immobilize their prey. They range in size as adults from around 90cm to the Great Barracuda which grows to around 6ft in length.

They are poisonous to eat as toxins build up in their body, but they eat other species of fish, such as snapper, jacks, grouper, or herring. They have poor eyesight but a great sense of smell.

As an adult, you will find them alone, as the younger Barracuda are the ones that school (called a battery). So, if you see a bunch of Barracuda they are probably the younger versions of the fish.

Divers and those involved in waters report that the Barracuda are normally quite shy, with some of them almost being camera friendly.

They’re attracted to fast-moving, flashy fish. Presumably, because this is a signal of distress in the sea, and that distress triggers an attack.

They are ferocious when they do decide to attack, relying on a speed burst that reaches 27mph. What I found surprising is that a school of Barracuda may compete with dolphins for the same food.

Where Are Barracuda Found?

I found this surprising but Barracuda are found worldwide. They’re anywhere in the tropical or subtropical zones (30°N – 30°S). Only in saltwater though.

They’re most common around the Gulf of Mexico, the Caribbean, and Western Atlantic.

They are rare in the Eastern Pacific, and lightly populate the Indo Pacific and the Red Sea.

It seems to me, if it’s normally warm water, there could be Barracuda.

How Do Barracuda Behave Around Humans?

Like sharks and piranhas, the Barracuda is given the reputation of being a ferocious, indiscriminate killer, but the reality is somewhat different.

Much like Sharks and Piranha to be honest. They’re much misaligned as well.

Although thought of as dangerous to those snorkeling around the reefs, they are opportunistic feeders, preferring fish, and scavenging the ocean for food. Any attack from a Barracuda on a human is likely them mistaking you for a distressed larger prey.

They like things that glint in the sunlight, so might mistake something you are wearing for a fish. They have poor eyesight.

How often the Barracuda attack is debatable but is still pretty rare. I can’t find any evidence that they just attack on sight, or repeatedly. Rather the reverse, most people seem to describe them as curious fish.

I read several times that there are only 25 documented Barracuda attacks in the last Century, which is certainly rare. How that number is arrived at is unclear, and as a story, I link to below, there might be a case of under-reporting.

Snorkeling sites in tourist areas aren’t going to promote every attack, that’s for sure.

Nevertheless, it seems it is unlikely that if you see a Barracuda it will attack indiscriminately, only attacking if it is trying to defend itself. It might even mistake some items you are wearing as a fish.

If they do attach it’s most likely going to be a laceration or a deep cut. The attacks don’t seem to be fatal, although there may be some we don’t know about.

Barracuda seem to strike once and don’t go back for repeated bites, so as long as you can get to safety, you’re probably going to be OK, even in the extremely rare likelihood of an attack.

There doesn’t seem to be any statistics for Barracuda attacks like there are with sharks, so this seems to be reflective of the rare likelihood of a fatality.

Is It Safe To Snorkel With Barracuda?

With all I’ve found out about them, it seems OK to snorkel in waters known to contain Baracuda. After all, the top tourist spots seem to be in areas where they’re present.

It’s probably safe to conclude that snorkeling with Barracuda isn’t as dangerous as everyone thinks, but it’d be safe to keep an eye on them.

Adults are supposed to be solitary, only schooling up to heard small fish. So if you see a school, called a battery, then they are probably juvenile fish.

They seek fast and distressed prey, with a propensity for fish. They scavenge and there have only been 25 documented attacks in the last century. Most human victims from Barracuda seem to survive.

There’s a good description of a Barracuda attack while snorkeling here, if you’re interested in reading. What fascinating is that the author recounts that he has swum with Barracuda lots of times before.

Tips If You Will Snorkel Around Barracuda

To try and work out how to prepare, react, and act around Barracuda I did a fair bit of reading. I learned a few things, so here’s what I am thinking about knowing Barracuda may be around.

Stay calm – Firstly, the thing to do is not panic. They rarely attack humans and tend to only do so in defense.

Snorkel smoothly – As much as you can, swim and snorkel with ‘grace’. Smooth rhythms are the lifeblood of the sea. Look at a shark or a ray and you see calm and flowing movement. Quick darts and thrashing signal distress to sea animals. If it senses distress, the Barracuda is more likely to attack.

Shiny items – Barracuda are supposed to be attracted to flashing objects, like a fish in distress. They are caught on lures for this reason. Try not to wear earrings, watches, or necklaces. Anything that might ‘glint’ in the sun.

No eyelids – A fascinating fact I’m sure, but the reason I bring it up is that Barracuda will sleep with their eyes open. If you spot one, motionless with its fins lightly moving, it may be asleep. They are still highly alert, so startling it probably isn’t a good idea.

While not perhaps as harmless as an angelfish, there’s a good reason not to be overly fearful of Barracuda when snorkeling.

They aren’t everywhere, and you may not see one. If you do, it could quite easily be on its own, and just be curious about you.

The moment you see one you don’t need to unduly panic. They don’t attack on sight.

I watched a bunch of videos for this article and it seems that most times Barracuda cause injuries to humans it was when they were being hunted themselves, either from spearfishing, or fishing. It just seemed like self-defense to me.

Attacks on humans seem rare, and they only seem to cause lacerations rather than fatal wounds.

So it might be just a case of making sure you don’t seem like prey by not wearing glinting metals, remaining calm so you don’t appear to be distressed, and make slow graceful movements.

So Barracuda aren’t dangerous in the sense that you are most likely to be OK if you encounter one.