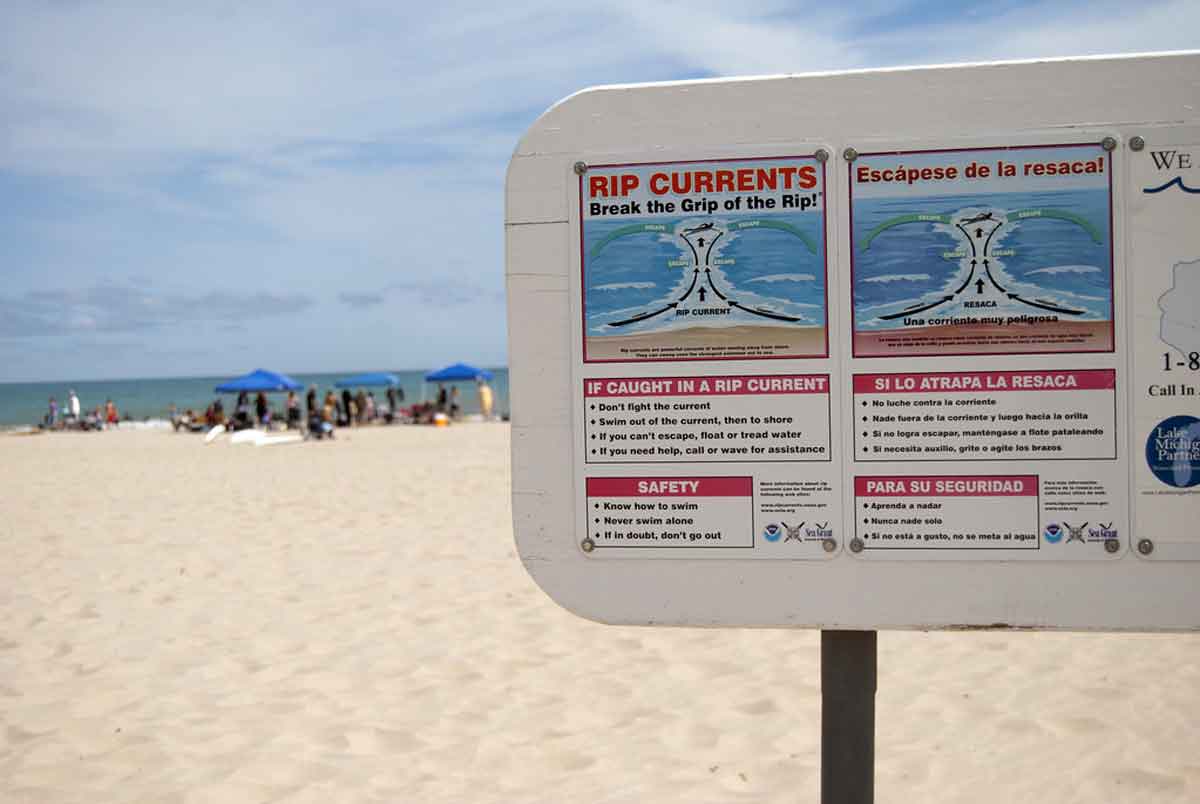 With all the idyllic imagery that goes with snorkeling, it can look like a paradise sport, and it is. It’s extremely enjoyable and rewarding.

While snorkeling isn’t described as dangerous, that doesn’t mean there aren’t dangers to be aware of. Knowledge dispels fear they say, so knowing the dangers of snorkeling makes the sport non-dangerous.

For beginners though, with limited knowledge, they may get themselves into a situation that they don’t know how to get out of.

One such danger is a rip current or riptide. They can often be abbreviated to ‘rips’.

It can be a danger, but what are rip currents and riptides?

A rip current is a flow of water taking place near breaking waves that moves away from the shore. Returning water from the waves to the sea channels back to form a current out into the ocean. A riptide is the same concept derived from tidal movement.

They are hazardous to swimmers and snorkelers alike but perhaps not in the way most people think. Many snorkelers that get caught in them don’t understand what is happening, and panic accordingly.

The immediate response is to get to shore, but you cannot fight a rip current or riptide. They are way too powerful.

Although they are survivable between 52 and 70 people die every year in a rip current in the US.

If you’ll allow me, let recount my first encounter with a riptide, not a rip current, although I’ve experienced both.

I was taking part in a rowing event for a charity in my mid-20s. We were coming back into the harbor and the cox was aiming well off to the side of the entrance jetties. We were more than 100m to the port side and looked like we were heading for a completely different place.

As rowers, we were all looking at one another wondering what was going on.

Suddenly, as if gripped by a powerful wave the rowing boat started moving sideways at speed, and it looked like we were going to miss the harbor entrance. Just as suddenly we broke free of the riptides grip and we continued rowing forward.

I genuinely thought we were going to miss the entrance.

That’s how powerful these currents can be.

So let’s run through exactly what is occurring with these powerful channels of water.

What Is A Rip Current

In its basic form, a rip current is a powerful channel of water that is NOT based on the tide.

Tidal flow is irrelevant, it can happen at slack water.

The easiest way to think of a rip current is that it’s the water from waves being taken back out to sea.

Continual breaking waves bring a large volume of water onto a beach. As water seeks an equilibrium, it needs to flow back into the ocean.

This water often channels through the easiest passage and the current that develops from this force of nature is known as the rip current, or ‘rip’.

There’s no set width, length, or speed as it depends upon seabed features. Typically they are quite narrow, but in extreme cases, they could be 100m in width, or take you 500m out to sea.

The larger the rip current in size the more water volume is being displaced back into the ocean.

The categorization of rip currents happens in 3 different ways.

Flash rip current – Waves and sea movement is not uniform. A sudden volume of water from large breaking waves needs to go back to the ocean. A flash rip forms until the swells die.

Fixed rip current – This is the one you see typically. Nature has decided that a specific location is where the water will return due to the underwater terrain. Normally quite stable.

Permanent rip current – When there is something immovable underwater, like hard seabed terrain, or a reef it forms an ever present obstacle that gives a permanent rip.

Is A Rip Current The Same As A Riptide

Rip currents are fairly common in the oceans of the world and can extend a few hundred meters out to sea. It’s not uncommon for them to only go just beyond the breaking waves though so you are not taken far out to sea.

They get weaker the further out you go from shore.

Although these terms are used interchangeably by many, a riptide is not the same as a rip current.

A rip current is normally quite narrow and seems like a jet of surface water. The force and direction come from waves on a shore, so the seabed plays a large role in where they are.

A riptide is caused solely by tidal movements when huge volumes of water move. They are caused by the tides from low to high tides, and back again. Their strength and duration are dependent upon tidal movement.

They are quite predictable.

Why Are Riptides And Rip Currents Dangerous

On the face of it, both riptides and rip currents sound scary. They needn’t be, but if you don’t know about them, suddenly finding yourself in the grip of a powerful water channel taking you away from the beach would scare you.

Most swim against the current, but this is a mistake. Sometimes a fatal mistake. A rip current is a large volume of water moving quickly, and you can’t fight it. You will lose.

Rip currents are not undertow. They don’t pull you under the surface and place you in an underwater grip.

Eventually, the channeled current dissipates. You could be a few hundred meters out to sea, where you can simply swim back to shore avoiding the rip current.

A rip current while narrow is still quite fast. They move between 0.5 m/s to 2.5 m/s. Just so you know, you can’t swim against that.

It doesn’t stop people trying because the rescue services say 80% of their rescues are people carried out by a rip current.

The key to escaping them relies on the fact that they are usually narrow, but more of that later.

The reason these currents are dangerous is that they typically scare beginners or people scared of the water. In the panic, they swim against the current that would defeat Olympians and tire easily.

They swim faster and faster as the current takes them further away and end up so weak that they often drown.

The US National Weather Service (NWS) has been tracking deaths since 2013. These figures are below.

So rip currents cause between 50 to 70 deaths per year in the US. That’s a lot of people, but most, if not all, those deaths could have been avoided.

How To Spot A Rip Current

The good news is that a rip current will have some visual signs of its presence.

There’s distinct visual identification on the water that if you know to look for them become obvious with practice. So if you are a beginner to snorkeling you can avoid these areas at the start.

If you spot a distinct break in the crest of the wave that looks like a patch of water where waves don’t break, then that is probably a rip current.

Essentially it’s a very noticeable pattern break in the waves. If you look along the shoreline, see breaking waves for hundreds of meters in each direction but there is a small patch without them, then that is a rip current.

As the water is moving in a different direction to the main effort from the waves then the area can often be a different color. Sand can be picked up, or light refraction on the surface, but it can be darker or lighter than the main sea color.

Learning the visual indicators can help any swimmer or snorkeler to be aware of the issue before getting in the water.

There are a few other sources of information as well.

Lifeguards – In popular snorkeling locations, particularly bays with rip currents a lifeguard will be present. You can ask them where they are and how powerful they are to know what sort of danger they present to you.

Flags – A beach with strong rip currents will likely have flags warning you of the danger. If it’s a known specific location then you will see plenty of flags giving you the ‘heads up’.

How To Get Out Of A Rip Current

This is easy to say, but difficult to do.

Many a beginner has panicked and let fear rule them. Quite frankly no-one should blame them, it seems unnatural.

As the signs say “Rip Currents; Break the Grip of the Rip”

They are narrow channels of water, so you can break the rip in 2 different ways.

Either way, you are going along the shoreline rather than directly back to the beach. You CANNOT swim against the rip, all you will do is tire yourself.

If you can’t escape, just tread water until it lessens.

Then swim parallel before swimming back to the beach.

Rip currents aren’t dangerous if you are aware of their existence, know what they are, and know how to escape the current to get back to safety.

The issue normally arises because a beginner just starting snorkeling isn’t aware of the danger. Also, snorkeling is done underwater as well so there’s a danger you may swim directly into one, particularly around headlands and fixed structures.

All they are though is fast-moving water going in the opposite direction to the main flow to the breaking waves on the beach.

Remaining floating on the surface you won’t be taken kilometers out to sea. The current grows far too weak much earlier.

Many confident swimmers go into them deliberately just for fun, so they aren’t something to panic over if you know what to do.

A word of caution I would mention though is that on a holiday the snorkeling areas can often be zoned. There is a small floating line on the surface (like swimming lane dividers) that helps contain people in a safe area.

I have seen people stray out of these. Straight into a rip current.

It was in Thailand and there was a clear demarcation of the safe area. A couple of guys thought they’d be clever and swim around the headland rock.

Well, you can guess what happened next. One of the guys started waving his arms frantically trying to catch the attention of everyone else before the lifeguards saw him and rescued everyone on a speedboat.

Don’t let fear rule you with snorkeling, it’s a great sport, but just remain aware of the dangers and remain calm.